During the Showa period (1926-1989) Japan had three different toilet styles:

1. Kumitori (basically a hole in the ground that you squat over)
2. Suisen (a Western-style flush toilet with a seat)
3. Washlet (a computerised bidet toilet that squirts hot and cold water and air, and provides electronic sound effects)

Kaori Shoji, in an article for the Japan Times entitled The Showa Days: were they really that good?, interviews an 82 year-old lady, Tani-San:

"In those days, there were no such wondrous things as hybrid cars, disposable diapers and the Washlet (the automated toilet few Japanese seem able to live without)," she says. "Showa living was a lot of hard work, not to mention those inconvenient toilets!" Tani-san divides Showa into three distinct periods: the surrender, which made her weep with relief; the first day in the postwar, black market years when she was able to eat three meals consisting of ginshari (pure white rice, so rare during the immediate postwar years as to be compared with gin, or silver), and when the family toilet was converted from kumitori (cesspit-style) to suisen (flush)."

It was only in 1977 that suisen toilets overtook sales of kumitori toilets in Japan, according to Wikipedia. A mere three years later, in 1980, the advanced washlet was launched. Sales of the high-tech toilet really began to take off from 1985 onwards. "As of 2002," says Wikipedia, "almost half of all private homes in Japan have such a toilet, exceeding the number of households with a personal computer. While the toilet looks like a western style toilet at first glance, there are a number of additional features, such as blow dryer, seat heating, massage options, water jet adjustments, automatic lid opening, flushing after use, wireless control panels, heating and air conditioning for the room, et cetera, included either as part of the toilet or in the seat. These features can be accessed by a control panel that is either attached to one side of the seat or on a wall nearby, often transmitting the commands wirelessly to the toilet seat. The most basic feature is the integrated bidet, a nozzle the size of a pencil that comes out from underneath the toilet seat and squirts water. It has two settings: one for the anus and one for the vulva. The former is called posterior wash, general use, or family cleaning, and the latter is known as feminine cleaning or feminine wash." (Wow, a toilet that knows that different genders have different genitals! How... sexist!)

As someone familiar with both British outdoor toilets (many flats in Aberdeen still had communal stair toilets when I was a student) and the squat toilets in Parisian bars, I'd experienced Western equivalents to Japan's retro toilets. What I hadn't experienced was anything like its future toilets. I had my first washlet experience in 1998. It was somewhat Tatiesque.

I was at 3D Corporation, the management company of Kahimi Karie and Cornelius. I parked my bottom on the toilet seat then jumped: the seat was warm! That felt tactile and welcoming, but at the same time a bit alarming. Electricity in the bathroom! Apart from the odd low-voltage shaver outlet, that's a taboo in the West. Next thing I noticed was the Star Trek-style electronic control panel with an LED display. All the buttons were in Japanese! Which one flushed it? I pressed a button at random. A jet of warm water hit my anus. Oy vey! I pushed another button. A flushing sound filled the bathroom, but nothing happened in the water below. This was totally surreal. Had I just put a real poo in a 3D virtual toilet? How could I link up the dimensions in such a way that my virtual poo got carried away by a virtual flush, or my real poo by a real flush? I left the bathroom in confusion, my clumsy gaijin turd still floating in the bowl. Only later did I realise that there was a "real" flush on the tank, and that the "virtual" flush on the control panel was just a sound effect to cover embarrasing noises. Wikipedia again:

"Many Japanese women are embarrassed at the thought that someone else can hear them while they are doing their business on the toilet. To cover the sound of bodily functions, many women flushed public toilets continuously while using them, wasting a large amount of water in the process. As education campaigns did not stop this practice, a device was introduced in the 1980s that, after activation, produces the sound of flushing water without the need for actual flushing. One brand name commonly found is the Otohime (Japanese: 音姫), which literally means Sound Princess, and is named after the Japanese goddess Otohime, the beautiful daughter of the sea-king Ryujin."

During my two months as artist in residence at the Future University in Hakodate earlier this year, I shuttled back and forth between a freezing wooden house and a super-futuristic university which resembled nothing so much, in its mountain setting, as a terraforming biosphere. I developed a daily ritual of visiting the big disabled loo down by the library and spending several minutes enjoying its soothing jets of hot and cold water and warm air (yes, I used both the "anal" and the "vulvic" settings). It was like having a mini sento dip in the middle of the day: I felt so clean and refreshed afterwards. I began to wonder when I, too, could have one of these devices in my home.

In fact, three Japanese technologies began to become indispensable to my idea of a "civilised life": the washlet toilet, the denki poto (a thermos kettle which allows you to have continuously boiling water for your green tea) and the vibro-massage chair. These technologies, familiar fixtures in most Japanese homes, are (like Japanese institutions the love hotel and the sento) the direct result of Japanese ways of thinking about the body, rather than anything specifically technological. The washlet was actually invented in Switzerland, although it never caught on there as a consumer item. We have all the same technologies in the West; what we don't have is the philosophical orientation or the consumer demand to make these things economically viable. These lacks are connected: we don't have the consumer demand because we don't have the Japanese attitude to the body, or cleanliness. As Wikipedia says, "historically, Japan has had a much higher standard of hygiene than, for example, Europe, and the orderly disposal of human waste was common, while in Europe, sewage was simply dumped on the streets throughout much of the continent's early history."

But how do you "go back" to lower standards once you've experienced higher ones? For instance, once you've got into the habit of separating your burnable from recyclable trash, how do you revert to the New York habit of just throwing everything into a black bin liner and dumping it on the street, knowing it'll either get turned into acrid, black smoke or end up in a Fresh Kills, Staten Island, landfill site? 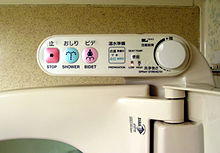 The fact is, it's very difficult, once you've been Japanized, not to want the whole world to Japanize. I can't conceive of my ideal home now without a massage chair, a denki poto (I've got one here in Berlin, but the transformer I need to run it is more expensive than the kettle itself) and a washlet toilet. I can't conceive of my ideal city without picturing love hotels and public baths on every block. Like a man who's been on holiday to 2050, I can't help finding the West a little, well, backward, especially when it comes to the body, hygiene, waste, and sex.
Collapse