All the Japanese people I've known love to sleep. They sleep differently. They treat sleep like a holiday or a hobby.

They can sleep anywhere. I remember, before I ever came to Japan, seeing haunting images of sleeping Japanese commuters in Chris Marker's film Sans Soleil. Then, when I arrived here in the early 90s for rock tours, I found that sleep was one of the things that united me with the Japanese: totally jet-lagged, I too wanted to nod off at every possible opportunity. The Japanese, though, were better at it. They could fall asleep on a train (their heads often sinking down to the shoulder of the stranger next to them) and wake up without fail at the right station, whereas I'd invariably miss my stop.

Japanese friends could happily spend all their free time sleeping. Sleep seemed to be the main use of the tiny spaces Japanese called their homes. Songs were written about sleep, like the "Sleep Song" that opens Takako Minekawa's Roomic Cube album (the droning mantra "I can sleep, I can sleep, let me sleep, let me sleep" is backed up by Buffalo Daughter's buzzing, chugging Moogs).

My own sleep song for Kahimi Karie, "Mistaken Memories of Medieval Manhattan", cast sleep as a very active occupation, filled with dreams "one hundred times stronger than acid", but sleep for Japanese seems much more Buddhist; a happy void, a temporary non-being, a refreshing little death, a positive absence.

Two features of Japanese life facilitate easy sleep: safety and proximity to the floor. You can fall asleep in public here without worrying whether someone's going to steal your wallet or your camera. And you're always close to the floor. I spent New Year's day eating a prolonged lunch with Hisae's uncles and their families. Everyone sat on cushions on the floor around a kotatsu table, heated from within, canopied with a duvet. The TV was on, conversation ebbed and flowed, courses came and went. Hisae's uncle was lying on the floor. Sometimes he'd talk to us, at other times he went quiet, and I noticed he was 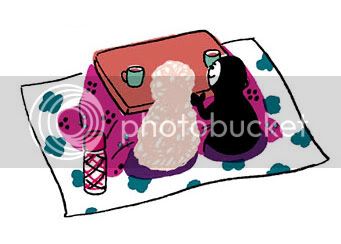 sleeping. He didn't have to change position to sleep; he was already reclining full-length on cushions. And nobody thought it was strange that he was sleeping through the family meal, sleeping in front of guests. There was no sleep taboo. Sleep didn't have to happen in private.

I did the same thing last night at the kabuki theatre. We took seats by the hanamichi or "flower path", the runway that actors use to make dramatic entrances and exits through the audience. Our seats were legless and collapsible; everything lay on the same level -- hanamichi, chair bottom, floor. So I stretched out, able to see the stage even while lying full-length on the floor. And soon I fell asleep. I wasn't the only one; Japanese nearby ate food or slept stretched out, for all the world as if they were in their pajamas.

Of course, the actors noticed (they flirt with the audience, make eye-contact, move amongst us soliciting donations). But they didn't seem to think it was strange either. During a three-hour variety show (pop songs, intervals, play) it's expected that you'll spend a certain percentage in a delicious kabuki sleep, a sleep lapped in coloured lights and distant music, a sleep from which you'll awaken when something dramatic happens or the pace changes.

I've read that artist Takashi Murakami, despite now being very wealthy, still doesn't have a proper house with a bathroom and bedroom of his own. Instead, he sleeps where he's working, lying down on the floor wherever he is and falling instantly to sleep whenever he feels like it, while his assistants continue to work around him. When he's installing shows in foreign countries he sleeps in the gallery too, right there on the floor. I cited this to my gallerist when I had my own art show last year in New York; I'd begun to feel uncomfortable returning to my lodgings in Harlem late at night after hearing gunshots ring out one night. So Zach kindly agreed to let me sleep on the floor of the gallery... just like Takashi. It was wonderful; no more commuting!

Sleep fits perfectly into Slow Life (or LOHAS, as it's as often called; the acronym stands for "Lifestyles Of Health And Sustainability"), and Slow Life continues to gain ground in Japan. Yesterday I was browsing an attractive Magazine House bi-monthly publication called ku:nel. Sleep already appears in the title: ku means eating and neru means sleeping. So this is a lifestyle magazine about eating and sleeping. Instead of promoting a glitzy, difficult-to-achieve, consumerist lifestyle for the 30-something unmarried women who seem to be its target market, ku:nel celebrates craftwork, cookery and... sleep (preferably with a cat curled up beside you on the futon). The magazine's mascot, Kunel-kun, is seen sleeping in many of the animations you can see on the magazine's website. "It's delightful to make a trip with a friend, to grow plants, to cook or sew, to steam in the bath, to drink tea, to walk in the rain, to watching shooting stars, to feel empathy with animals," Kunel-kun seems to say to his tender-minded and wholesome readers. "Don't bother consuming all that gaudy trash other magazines talk endlessly about, just sleep instead! It's cheaper, better for the planet, and just as much fun!"
Collapse