Music is a good thing. Of course it is. I'm a musician, I've dedicated my life to it, and I know few better things. Music can be sacred, mysterious, otherworldly, intimate, moving, extraordinary. But, increasingly, music is the opposite of those things. It's profane, banal, public, shared, irritating, ordinary and ubiquitous. It's in every restaurant and every cafe and every car and every office and on every computer and on every website. It's in each ear, snaking in on a thin white wire. You listen to music all day, every day. Time without music is downtime. It's the triumph of music! Or is it? Maybe ubiquity signals quite the opposite; music's defeat. For music, ubiquity is the abyss.

Thank you, Steve Jobs, and thank you, Rupert Murdoch! Your marketing ingenuity has spread 42 million iPods across the world, each capable of holding weeks and weeks of music. There are almost as many MySpace pages, 37 million, each one loading up a piece of music as soon as you hit it. Of course, Steve and Rupert aren't leveraging music into our lives because they love music, or even because they love us. They're doing it because it's a key to massive profits, because we love music. Music, after all, is a key to so many other things. It's an index of taste, a measure of social class, a way to bond with others in a social network. 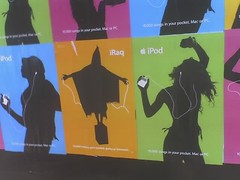 But for whatever reason, Steve and Rupert and the others have squeezed music into every blank bit of space in our lives. We are rapidly reaching the limits of our own ears (tinnitus, my headphoned friend?) and the saturation point at which music becomes utterly unremarkable, and thus, effectively, inaudible.

As usual, Brian Eno was the first person I'm aware of to sound a warning note. In an interview he gave around the time he moved to St Petersburg, he said (I quote from memory) "I'm beginning to be dissatisfied with the idea of CDs, the way they make all music so available to us, the way that all musical experiences are supposedly able to be shrunk down to fit this little plastic disc. I'm beginning to think it should be as difficult to hear music as it was in the Middle Ages. Imagine just hearing a concert once a month, how amazing it must have sounded!"

One good thing about iPods, though, is that they privatize the bad taste of others. When not plugged into speakers or streaming wirelessly to sound systems, iPods shrink other people's music choices (and for me 95% of other people's music taste is unbearable, sorry, other people!) down to little white buds of semi-silence. It's a start in the great work of music removal we must now begin to undertake, we who love music and want to save it by making it scarce again.

On Friday evening I attended a party celebrating Lord Whimsy's birthday at a flock wallpapered bar called The Dove on Thompson Street. A Californian dandy called Doran Wittelsbach was there, and I found his Robert de Montesquiou-esque image admirably extreme. He told me he'd been catcalled on the street by ruffians who pronouced him a "douche". "It sounds very clean, a douche," I remarked, refreshed and impressed by his capacity to antagonize the bridge and tunnel crowd merely by walking down the street in a top hat. Clothes, these days, are clearly more subversive than even the most aggressive music.

Unfortunately, the inevitable moment came. "I also make music," Wittelsbach confided. "I'd like to give you a CD later." I made hasty excuses and left, sneaking off with Karin Komoto to Japanese cafe Hiroko's Place further down the same street. I'd love to tell you we dined accompanied by the ambient, arhythmic sounds of running water, voices cooing conversational Japanese, and clattering pots. But no, Hiroko was piping in Ayumi Hamasaki. Another hour, another 15 songs.
Collapse