It was a hot, flame-throwy weekend over on Neomarxisme, and the blog's shellshocked author emerged blinking into the Tokyo sunshine -- well, chilly rain, actually -- this morning requesting that people be less vituperative and recommending that "this blog should not read as a sole source of information on Japan". Sound advice. So, Marxy and the excellent Jean Snow aside, who's blogging interestingly about Japan in English? I've put some answers below, but mainly this is a question. I want all your Japan-related bookmark recommendations, please, people! 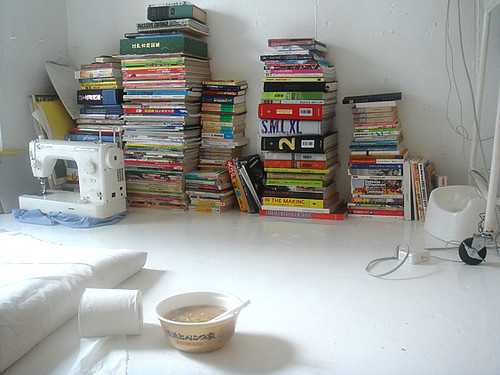 Alin Huma: Alin is an Australian artist living in Tokyo. His LiveJournal Akabe is highly visual; it's mostly photographs, like the view of his Tokyo room, above. When he writes text, it's close to conceptual art. Reversing Russian artist Aleksandra Mir's proposal to rename the streets of Tokyo using a "western coherent system", for instance, Alin suggests using the Japanese system to rename Paris streets. "An address would look like: Paris 10-2-15-28-16. If too clinical, the names of the arrondissements could be kept: Paris Magenta 2-15-28-16."

Shobus Diary: It ended last September, but the Shobus Diary kept by a bunch of Frenchmen who call themselves "odot, dabite barura, mehdiminifer, domo-san" is one of the most infectiously enthusiastic Japan blogs I've seen. Beautiful women, cool vehicles, progressive art galleries and universities, the singing of the semi... Japan seems to have organized all its most wonderful sights, sounds and smells around these men who walked through the land emitting love and digital sound. Domotique, back in France, summed it all up: "i wish i was still there. i stand on the left lane in the metro's escalators. i say "hai" to say "oui", i say "ikimacho" to say "on y va", i miss lozi and yoyo. i came back from geneva this morning and the train was full of japanese tourists, i wanted to talk to them in japanese, i wanted to share their bentos, i wanted to drink their tea."

Kissui: "Kissui.net is made by Yuki. She is a 20 year old anthropology student in Tokyo, Japan." One thing I like about Yuki is her outspokenness. She doesn't at all fit the usual Western stereotypes. Ozu once said that when Westerners don't understand Japan they call everything Zen; you could say that when Westerners don't understand Japanese women they call them either submissive or feisty. But they would never dare to describe the kind of feelings Yuki confesses: "Whenever I see a girl around my age wearing a ring on their left ring finger, I feel like a loser already. I lost to that woman! She may be fat, ugly, dumb, and her boyfriend may be a nerdy dorky geek, but hey, I lost. Yeah I admit it. I don’t want to feel this way! But since our paths to the future are pretty much all on the elite side career wise, the only thing we want to not become is be 30 years old, not married, and not have any children."

Aoki Takamasa: Aoki Takamasa, a Japanese musician based in Paris (you might know his work under the name of Silicom), has this week been commemorating the anniversary of the Hiroshima bomb. But he doesn't stop there; he's campaigning actively against the Rokkasho nuclear waste reprocessing plant in North Honshu. (Scroll down for English translations.)

Rinko Nikki: It's not in English, but in pictures. Photographer Rinko Kawauchi's keitai photography diary is the best place to understand what you'd actually be moving towards if you truly "Japanized" your life. Her July page, for instance, celebrates watermelons, bookstores, food, lanterns, cats, lavendar, snacks in porcelain, birds, plants, insects, the sky, art installations, public transport, children, the moon, forests, and flowers.

Rinko Nikki is now collected in a book. Keeping a copy by your pillow would be a great way to improve your dreams... and your life.

There's an interview with Rinko at (the highly recommended blogzine) Pingmag. "I prefer listening to the small voices in our world, those which whisper," she says. "I have a feeling I am always being saved by these whispers."
Collapse