I stepped into Dense, my favourite Berlin disquaire on Danziger Strasse yesterday and chatted with Tim Tetzner, who runs it, and Torsten from Karaoke Kalk, who put out Toog's last album in Germany. Tim knows my taste pretty well, so I asked him to recommend me some records. He started pulling out the sort of Franco-Japanese stuff I tend to like -- the new Konki Duet album Mountain Mouton, for instance. (See them play cardboard instruments in their new video Inflammable.)

The thing about someone knowing your tastes so well is that you tend already to know the stuff they know you'd like. Which means that you're probably getting a free copy of the record. You certainly are if, like me, you've already co-written a song with Kumi Okamoto of the Konki Duet, which will appear on her forthcoming solo album. Anyway, the whole thing gets very "famous for fifteen people", very circular.

So today I've taken it upon myself to recommend a new artist to myself. And you. So I've picked Joe Howe, a Glaswegian laptop kid (he's about 20) who makes records under the

name Germlin. He's also in Gay Against You, whose new album you can download entirely free from Last FM. They play Madame Jojo's in Soho, London, on Tuesday.

Young Mr Germlin -- who reads Click Opera and has commented here, hello Joe! -- makes "laptop gabba" and "nerdcore". He's supported Jason Forrest, a fellow Adaadat label artist, as well as DAT Politics, and you can hear some of their 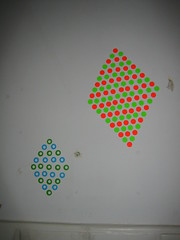 digi-splatter stuff going on in his sound. I'd say he also crosses over, soundwise, with my friends Super Madrigal Brothers and Digiki (whose new Polypunk podcast has just gone out; unmissable -- it starts with a track from the new Cagesan release, a bird-artist project produced by Toog and a bunch of people, including me, and outfitted by Flo Manlik).

So, anyways, here's more stuff about Germlin. His album came out in January. He was in i-D magazine looking like a psychedlic nerd-hiker. His own comment on his looks is "I don't think I have ever looked more Jewish or spazzy than in this photo which Emma took. I was obviously in a good mood." 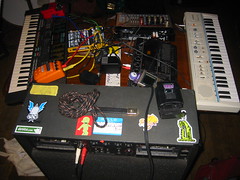 Here's Joe on YouTube performing live. Here's a very nice Resonance FM You Are Hear session he did in late 2005 (he even sings a bit in it!). You can see Joe's other photos on his Flickr page. I think it's important, before endorsing someone, to see his bedroom, for instance. Joe's passes the test. According to his LiveJournal he's currently spending a lot of time in there, suffering from headaches -- the downside of digi-splatter, perhaps. Get well soon, Joe!
Collapse