Sugar Rush is a fascinating, terrifying and important Guardian Special Report about sugar in food. Sugar is so addictive it should be classified, says the British Medical Journal, as a hard drug. The immediate pleasure it gives us soon leads to much less pleasant things -- tooth decay, obesity, diabetes, cancer, depression and anxiety. More and more of the food we eat -- even fresh fruit and vegetables and savoury stuff -- is, basically, turning into sugar. Whether we choose to eat the stuff or not, it's everywhere, bred into crops and brewed into beer and sprinkled into cooking and stuffed into every plastic-wrapped package lying in wait for you at the late-night grocery. There's more of it in more products than there was even in the early 1990s. It's there for commercial reasons. We like it, we buy it.

Read the article yourself -- I did, while sucking on a marzipan potato. What I want to single out and pick up on today is just one quote that pops up half way through, a quote I found very interesting, very symptomatic. A "sugar apologist" is speaking, an executive who worked for Cadbury Schweppes for 23 years before becoming a market researcher. Colin Gutteridge is explaining the "taste evolution" towards today's sugar-with-everything world.

"I remember being presented with yoghurt for the first time when I was nine," Gutteridge says. "It was acidic and I thought it was repulsive. If there is a trend over the past 100 years it is taking products that are marginal in taste and making them more acceptable to a wider range of people by adding in sweetness. Does any of this matter? Personally, I don't think so. Without it I would never have enjoyed yoghurt."

Now, never mind sugar, what Gutteridge is describing could as well be the story of indie bands signing to major labels, or New Labour. It's the application to the food world of the old question "what profiteth a man if he gain the whole world but lose his own soul?" Let's look at Gutteridge's argument more closely. 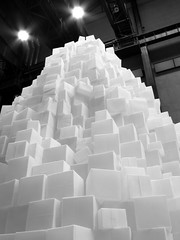 1. Yoghurt is acidic, repulsive.
2. Sugar is pleasant, popular.
3. Yoghurt is marginal.
4. Sugar is central.
5. If we put sugar in yoghurt, it can become central, mainstream.
6. Therefore, by adding sugar, we can help people to enjoy yoghurt, and help yoghurt to go mainstream. Everyone wins!

But here are the contradictions Gutteridge doesn't seem to see in his argument:

7. Is this sweetened yoghurt still yoghurt? Isn't it just sugar posing as yoghurt?
8. If you believe yoghurt is essentially repulsive, why help people to enjoy it in the first place? Why not just eliminate it?

I think these last two questions raise troubling thoughts about democracy, consumerism, the free market and other systems that purport to give people what they want. People usually want things that stimulate them in the most stupid and obvious ways. Like rats in a lab experiment, we'll push the button that gives us orgasm, or money, or a sugary snack. Given half a chance, we'll push it until it kills us. We sort of know this, and we sort of feel guilty. Rather than gulping down pound bags of sugar all day, we try to balance our diets, eat healthy things like vegetables and yoghurt. If those things also turn out to have sugar in them, well, at least it's a blend of the palatable and the virtuous. We did try.

The system doesn't really want to change, but it does want to think well of itself. So, instead of revealing its monopoly face and just showing us its addictive trade in drugs and sugar and arms and energy (and in the case of sugar it was a brutal slave trade), it shows us a diverse system in which lots of healthy things are also for sale -- yoghurt and indie pop and intelligent literature -- and in which the Labour party can sometimes come to power rather than the business-friendly Conservatives. And yet, when you look closer, you find that the Labour Party has come to power at the price of expunging Clause 4 of its constitution -- the idea that the goal of the party is to secure for workers the full fruits of their labour. That's the core DNA of the Labour movement, its "yoghurt".

The price of success is often the complete destruction of all otherness, all identity, all soul, all flavour, all texture. And yet success on those terms isn't success at all. It's a kind of possession, a capitulation. Nothing fails like success. By failing to provide a real alternative, by giving the public only what it thinks it wants, you're failing them as well as yourself. Instead of giving them the full fruits of their labour, you offer them a fruit stuffed full of sugar.
Collapse