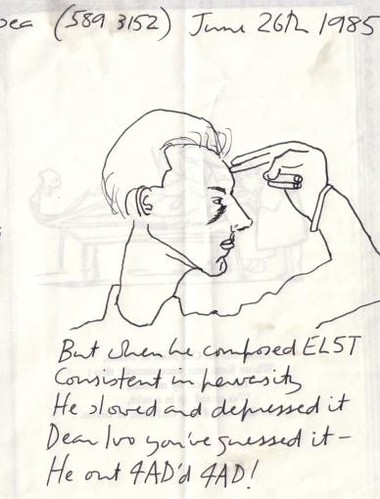 Here's another batch of demos from old Momus cassettes. This time we start with a few tracks from the "legendary lost Momus album" BBC 1. This was going to be the 1987 follow-up to Circus Maximus on el Records, and we already had a rather brilliant sleeve illustration (me as Atlas holding up the BBC 1 Earth logo) by Ed Pinsent. But, as fate would have it, I switched to Creation and made The Poison Boyfriend instead.

BBC 1 was to have been a theme album -- songs like "The Filippino", "Confectioner" and "Splitting the Atom in Eden" (released here for the first time) would have joined "The Mother-in-Law", "Love on Ice" and "Situation Comedy Blues" (later plundered somewhat haphazardly for Creation albums) on a record deconstructing television and the whole idea of mainstream electronic vaudeville. It's a retro theme now, of course; the golden age of television is clearly over. But electronic vaudeville continues to be a big theme for me, as does the question of whether life / sex is more interesting than media / art: there's some great entertainment lined up for me on BBC 1, but meet me on Shaftesbury Avenue...

The Filippino
Confectioner
Splitting the Atom in Eden
Ash and Sack
Nobody
Landrover
Paolo
Hotel Marquis de Sade
John the Baptist Jones
Lesson of Sodom (According to Lot)
Rules of the Game of Quoits
Lusts of a Moron
Amongst Women Only
Shaftesbury Avenue
Start at the Top
Could I Leave You? (Sondheim)

The comments for Amazing Blonde Women, the last Momus demos podcast, saw several people saying they'd be willing to pay something for these releases -- if you feel that way feel free to visit the old Momus website and make a Paypal donation using the button there.
Collapse