This is where it all started for me, musically speaking. Here's the ten-song demo I handed Josef K guitarist Malcolm Ross in 1981, the one that persuaded him to form a group with me. The tape was marked, rather confidently, "Pre-demo demo: Germs of Gems". The artist name was "Group of 1" (a reference to a line on Bowie's song "Teenage Wildlife" -- "I feel like a group of one") and, since the tape's purpose was to get me signed to Postcard Records, I added, cheekily, the motto: "The sound of young bourgeois Scotland". Postcard's motto was "The sound of young Scotland", but the "bourgeois" bit was because on the tape I'd written my embarrassingly posh address: 7 Ainslie Place, where I was living in a Kafkaesque mezzanine between my father's flat and the practice of two old lady psychoanalysts.

What strikes me now about this material is how avant and experimental it sounds. Influenced by reggae dub, by the scratchy-funky "messthetics" of early Scritti Politti, by Eno and Talking Heads and ethnic music, recording lo-fi on cassettes and two track machines intended for my dad's language college, I ended up with a homemade quality which I now find texturally a lot more interesting -- despite the muffled audio quality -- either than the sound of the band the tape led to, or the more folksy-trad acoustic guitar sound I embraced on my first solo album. Closer to what I do now when I record, in fact. 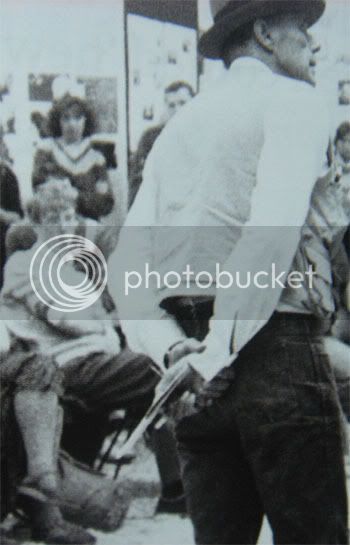 Back in 1980, though, the sound was partly a case of necessity mothering invention -- the guitar I had at the time was a battered acoustic with one string -- the fourth -- missing. That divided the instrument into a two-stringed acoustic bass and a 3-stringed top guitar, which I recorded in separate takes to the little two track cassette machine. It also led to much more interesting arrangements than chordal strumming on a "healthy" guitar. The top guitar, with no fixed tuning, dances or slides glassily about while the bass chugs and improvises below.

My lack of an amp also forced me to invent interesting recording techniques, so there are twanging strings with the mic wedged directly under them, cemented into place with wads of tissue paper, or close-mic'ed harmonics above the bridge. There are reverse-decaying backwards guitars or even rhythm guitars recorded without reference to the rest of the song, and laid in at random in the mix, swaying in and out of time and setting up some interesting polyrhythms. The percussion isn't carried by a drumkit, but by all the instruments playing their own frantic, scratchy, eccentric rhythms, with the occasional cowbell or kick drum mimicked by cups, cardboard boxes, and an anglepoise lamp spring for a cymbal. This is a sound I could happily return to, a kind of funky communist avant pop.

The communist bit is in the lyrics, which pay tribute above all to Brecht ("Antigone" takes its entire lyric from a Brecht poem), but also to The Passage (a highly underrated, innovative electronic band on Cherry Red, with committed leftist lyrics), celebrate the Spartacists, decry puritanism and commerce and demand that "lullabies by liberals for sordid sorts by swimming pools" be stuffed full of cotton wool and fed to the dog. Revolution... but not as we know it, Jim. There's also a strain of Josef K-like "nervousness romanticism", and some Dostoyevsky by way of Magazine ("Its tricks drive me furious when they add insult to injury... Why can't my double learn a little decency?" goes one song, sounding an awful lot like "My Tulpa"-period Howard Devoto).

It's interesting that so little of this material got recorded later. Of the ten songs, only three made it onto Happy Family records. So I guess the tape is almost like a "lost album". For something recorded (Christ!) twenty-six years ago, it sounds quite fresh.

Since I was "blogging" back then too -- well, keeping a diary -- I can give you the context for one of the tracks. Here's my entry for the day I wrote and recorded "Catalogues":

The day's first engagement, Kenny Everett at 3.35, presented David Bowie in a padded cell (Kafka's metaphor for the world) and a kitchen with exploding appliances and windows, singing "Space Oddity". His expression was of bewilderment, fear, his little boy lost manner, used to uneasy effect.

Meanwhile the media paraded predictions, people projecting their own psyches onto the future.

Soon I returned to my two-track machine to regain the purposeful & creative element so necessary. The chief achievement was 'Catalogues', starting as a rhythm track with tin, bottle and shoebox percussion, then gathering layers. Finally it had a stereo vocal, an alliterative, nonsense-cum-critical lyric with stuttering rhythm. I worked some time on different versions, very tensed and eager. Listened to it on the stereo while Father and Chris Garner (colleague in Athens) talked shop; predictions again. Some very bitter coffee compounded the effects of my nervous mood, and I continued my bizarre habits regarding sleeping hours.

Scraps: dinnertime conversation touched the possibilities for my future (Father thinks missionary work!) and the over-exuberance of [name removed] last night, lifting his kilt to his guests, insulting his wife.

The hamster grates his teeth up and down the bars of his cage, widening the furrow in his jaw, as if his life depended on it."

It might be fun to transcribe more of these 1980 diaries... They could have their own blog somewhere! Meanwhile, the only photo of myself at 20 I have to hand is this fuzzy one of me listening to Joseph Beuys.

There's just one more demos podcast I want to release after this, a tape called "Innermost Thoughts" which compiles all my experiments pre-1981. I'm still searching for that one in the cellar. In the meantime, if you want to make donations in exchange for these podcasts, there's a button here.
Collapse