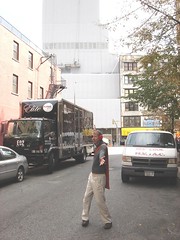 A slash-friendly series of tiny photos of me in various places over the last month, today, in images harvested from my Flickr page.

October 2nd, New York City. Taken at the New Museum, near the intersection of Prince Street and the Bowery. The building (which opens in a month or so) is by SANAA, and I've become a sort of "SANAA pilgrim", making treks to see their structures. The last one was the Moriyama House in the Tokyo suburbs. 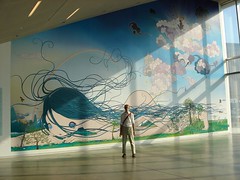 October 4th, Boston. I'm at the ICA Boston, about to give a tour of their show Design Life Now. In the lobby they're showing a huge wallpaper piece by Chiho Aoshima called "The Divine Wind". The original divine wind brought the kamikaze pilots screaming to their deaths, didn't it? Here, instead, a pretty girl, eyes filled with eco-themed tears, lifts her rump and blows out a divine fart. 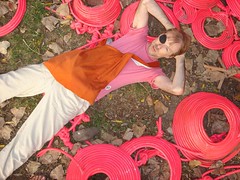 October 7th, New York. Can pinkness get any more pink than the pinkness in this photograph gets? Rhetorical question. I'm lying on the ground at the Socrates Sculpture Park in Astoria, Queens, in someone's sculpture installation. The sequence is that this happens just after visits to PS1 (sticker evident on pink t-shirt) and the Noguchi Museum, and just before the obligatory trip to the Family Mart on Astoria Broadway for green tea and mochi cake. It's worrying how my trips through cities are now often these autopilot revisitings of familiar places, on set routes. Then again, I did see Roosevelt Island for the first time that day. What a weird place! 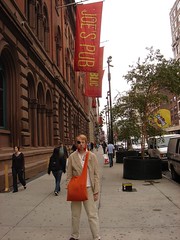 October 10th, New York. You know, when people ask where you're playing in New York and you say "Joe's Pub", they think "Sad tosser, he's playing smaller and smaller venues each time, career dwindling away. A pub now, is it?" But look, Joe's Pub is the Joseph Papp Public Theater on Lafayette Street, and it's this gigantic building with this amazing history (Shakespeare in the Park and so on). What I like, also, is that my New York shows have mostly happened within a couple of blocks of here: they began ten years ago at Fez, under Time Cafe, just a block down Lafayette Street. 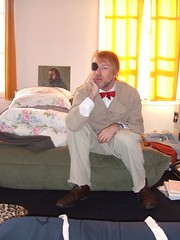 October 20th, Paris. Skipping London and Denver (for no other reason than that I couldn't borrow a camera in those cities -- mine is broken at the moment), we find ourselves in Paris. I've dressed up for Toog's wedding like a 1950s chemistry professor, with a £2 Oxfam Lanvin bow tie, or papillon (butterfly), as they call it in French. Hisae, who has joined me in Paris, is dressed for Scottish Country Dancing. Toog and Flo's wedding doesn't contain that -- instead, we do a lot of Japanese City Eating. 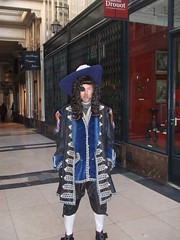 October 21st, Paris. Here I am dressed up as the "Marquis de Wifi" (so-called because under my costume there's an iPod Touch). Toog and I were filming a serenade for and with our friends Joseph and Alton, a gay mixed-race couple from Alabama. My idea was to remake the stiff poses of Fassbinder's film Effi Briest, based on Fontane's 19th century novel of the same name. But at the costume shop, bless 'em, Joseph and Alton picked out this royalist garb, which had Frenchmen on the Passage des Panoramas shouting out "Vive le roi!" at me. I am, needless to say, a staunch republican. Far from militating for France to return to its monarchy, I'd like to see Britain overthrowing its geriatric, toothless royals and becoming a republic itself. 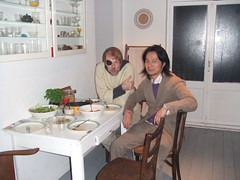 October 22nd, Bruxelles. My friend Aki Onda was playing one of his cassette improvisation shows in Brussels, accompanying the projections of Ken Jacobs. The next evening he came round for dinner at the squat where I was playing my show with Sun OK Papi KO. From the stage I gave a little speech about how we'd both done our best work for women (Aki produced some of Tujiko Noriko's work). 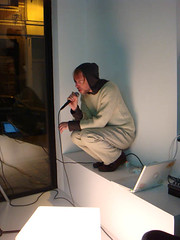 October 23rd, Bruxelles (photo by Pasqualino). This is the second of my Brussels concerts, at clothes shop Le Vestiaire. It was an elegant little space, and I performed a totally different set from the night before, except for the re-occurrence of my cover of Sakamoto's "Thatness and Thereness". Afterwards Hisae and I went to catch the night train to Berlin. At first I thought I'd lost the tickets. I found them, put them somewhere I thought was safe, then found I'd lost them again (they must have slipped to the floor between bag and jacket). We boarded the train without tickets, got chucked off at Liege, had to explain ourselves to the police, stayed overnight in a hotel, and returned to Berlin the next day, expensively but interestingly, via Dusseldorf's Japanese quarter.
Collapse