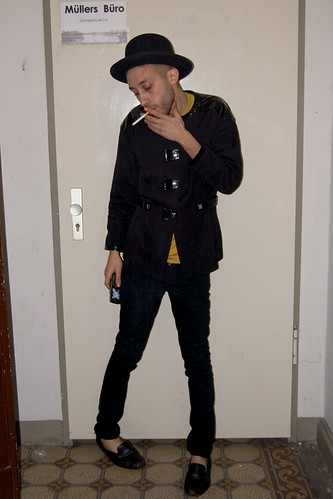 While you're leafing through Stil in Berlin's photographs of this city's coolest, most fuckable arty party animals, just remember one thing: they stink. If you could smell these carefully-assembled, dizzyingly diverse outfits, they'd all have one thing in common -- the ashen pong of fresh or stale cigarette smoke.

Berlin is the last frontier of in-yer-face social smoking (only matched, it seems, by Tokyo). It's a town in which schall means rauch, buzz correlates to smoke, and youthful hedonism is triangulated between three constant props: the beer bottle, the cell phone, and the cigarette packet. It's been this way forever, and it'll stay this way till... well, till Tuesday, actually.

Because Tuesday, January 1st 2008 is a historic day -- the day Berlin becomes Germany's pioneering no smoking town. From Tuesday, smoking is banned in all official, health, cultural, sports, educational and children's facilities, in all restaurants and pubs, in airports, and in any space (except private homes) enclosed by walls and a ceiling. There's a standard fine of €1000 for the owner or occupier of any room in which smoking occurs, though there's a six month transition period in which fines won't be applied. Bars and restaurants will still be allowed to have a smoking room, but won't be allowed to offer service there.

The smoking ban has happened despite two things, the attempts of conservative chancellor Angela Merkel to block the ban, and the fact that the Nazis were anti-smoking, and that therefore anyone who tries to ban smoking is seen as some kind of "health Nazi".

The weird thing about the Nazis' anti-smoking policies is how utterly ineffective they were. Despite portraying smoking as a cosmopolitan-foreign-capitalist-savage plot to enslave the Aryans ("the wrath of the Red Man against the White Man for having been given hard liquor", Hitler once called tobacco), and despite taking out advertising and enacting legislation designed to wean Germans off the noxious weed, the Nazi period saw German per capita tobacco use rise rather than fall -- from 570 cigarettes a year in 1932 to 900 in 1939 (for comparison, French consumption in the same period grew from 570 to just 630 cigarettes).

"Our Fuhrer Adolf Hitler drinks no alcohol and does not smoke," ran one 1937 poster campaign. "His performance at work is incredible." The target audience seems to have remained thoroughly unconvinced. German tobacco companies responded in two ways. First, they presented themselves as staunch supporters of the Nazi regime, launching "Stormtrooper cigarettes". They also launched a slew of pseudo-scientific "medical journals" intended to sew doubt about the anti-smoking movement and portray its proponents as "unscientific" and "fanatics". In an arm-wrestle between the Nazis and Big Tobacco, it seems, Big Tobacco won.

It remains to be seen whether cool Berliners will continue to stink past Tuesday, and exactly what clever measures pubs and clubs and restaurants will take to circumvent the new legislation. Will they go as far as the inn in Lower Saxony which cut a smoking hole in its wall? Or, in a city notorious throughout Germany for the fact that people -- gasp! -- cross the road against the red man, will people just ignore the ban -- at least until those hefty fines kick in?

Personally, I'm delighted to see Big Tobacco given a great big kick in the bollocks here in Berlin. And I hope that, starting next week, our gorgeous hipsters start smelling as sweet as they look.
Collapse