Bjørn Andresen (born 1955 in Stockholm) was the child star of Visconti's lugubriously beautiful 1971 film version of Thomas Mann's "Death in Venice", centred around the homosexual longings of an elderly composer for a beautiful teenage boy he spots in a Venice gripped by cholera. You can see Visconti casting the movie in the documentary In Search of Tadzio. Andresen, now a minor actor raising a family back in his native Sweden, has reached the age of Dirk Bogarde's character Von Aschenbach in the film, but looks back at his teenage fame with somewhat less affection. Tadzio has become something of a skeleton in Andresen's closet, a portrait in his attic. 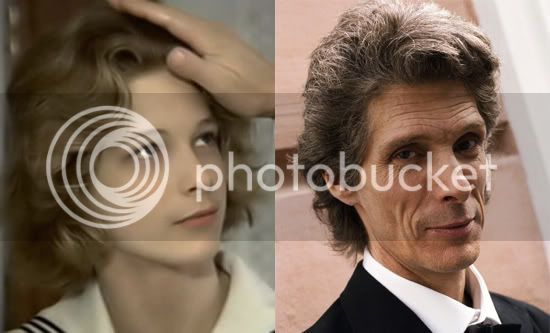 Andresen has complained about being taken to gay clubs by Visconti and the (predominantly gay) crew, and was upset when Germaine Greer put his image (snapped by David Bailey) on the cover of her book The Beautiful Boy. He later experimented with gay sex himself: "I had a homosexual experience in the 70s," he told El Mundo magazine. "People were discovering the gay thing and then in the world of entertainment homosexuals became very popular in Sweden. It seemed very modern, something that was fashionable. I think we have to try everything. I did it more or less to say that I'd tried it, but it's not really my cup of tea."

The other thing Andresen tried was Japan. "After the release of Death in Venice," says Wikipedia, "Andresen spent an extended period of time in Japan, where he appeared in a number of television commercials and also recorded two pop songs. It is said that his appearance as Tadzio in the film inspired many Japanese anime artists (known for their depictions of young, effeminate men), especially Keiko Takemiya". This intrigued me -- the idea that Tadzio became a model for the kind of bishonen character I was singing about in my 1988 song "Bishonen" (based on an account of "the third sex" in Ian Buruma's book "A Japanese Mirror") -- so I set about trying to google whatever I could about "Tadzio in Japan".

The history of Andresen's Japanese months can be gleaned from various Japanese websites dedicated to him and the endless merchandising his ambivalent image has spawned. "Death in Venice" was shot in early 1970. Andresen visited Japan twice, in August and December of 1971. On these trips the beautiful boy posed for a fashion feature in An-An magazine, where he was styled by Isao Kaneko and art directed by Seiichi Horiuchi. They put him in sailor suits and tried to make him look as much like the 15 year-old Tadzio of the film as possible, despite the fact that he'd already turned 16. An-An came out on September 20th, and "Death in Venice" hit Japanese screens on October 2nd.

Andresen didn't waste time in Japan; he also appeared in some commercials for a Meiji chocolate product called Excel. He recorded two singles for CBS / Sony, "Forever Together" and "For Loving", but disappointed fans by saying in interviews that he had no desire to continue his music career (much later, he played in a Swedish group called Sven Eric's Dance Band).

One Japanese website shows family snapshot album pictures of Andresen in Japan in 1971 with his parents. The captions show a typically Japanese amused fascination with the gaijin's first encounter with Japanese food:

"Bjorn pokes at sukiyaki. As for the raw egg, he must have had a bad feeling about it -- it seems not to have been eaten."

"Bjorn stuffs his mouth with rice crackers. The expression on his face is one you won't see in the movie."

"Bjorn gets angry for a moment. To tell the truth, it's because he's been told he's too young to drink the sake he's been looking forward to."

Andresen's lasting Japanese legacy, though, is to have provided a little bit of his cultural DNA to the shoujo manga industry in the form of a marked influence on the way epicene, ambiguous male heroes were portrayed. For a while, at least, the beautiful Swedish boy inspired depictions of the bishonen, "the youthful hero doomed to fall like blossom". Not to mention a wildly successful slew of four-button sailor tops from Isao Kaneko's Pink House label.
Collapse