I'm an idiot. I missed the most important -- and possibly the most influential -- art show of 2007 because I believed poisonous rumours circulating about its awfulness. Documenta 12, four months after its closure, is acting like a classic sleeper, a grower, an earworm. Like a song that resonates more and more beautifully in retrospect, Ruth Noack and Roger M. Buergel's oblique, idiosyncratic art survey in Kassel turns out to have been the most significant exhibition in a year crammed with big, bold, flashy international ones. It's done it by being quite the opposite of flashy: quiet, marginal, revisionist, shy, off-kilter, evasive, perverse, self-indulgent, didactic. The extent to which D12 divided opinion is a measure of its importance. Some immediately hated this show, others, later, were quietly intrigued. Personally, I'm fascinated by things this divisive. They're often bellweathers, barometers, watersheds, auguries, agar jars.

Luckily, Documenta has been documented. We can still glimpse it in videos, websites, catalogues, slideshows, photo archives, reviews. In fact, let's do that right now. You might want to keep your finger poised over the pause button during this compressed five minute visit:

Here's a big archive of photos of D12. And here's Tokyo curator Roger McDonald's take, in the form of a slideshow with commentary.

"There were actually a lot of small-scale works in tiny cases and glass frames. Maybe this again encouraged me to experience the show as something quite homely, like the curators' wunderkammer -- cabinet of curiosities," says McDonald. "It's kept me thinking and wondering longer than Venice. Maybe this lingering sensation is what many critics found so irritating -- in an age when exhibitions must be packaged and consumed quickly, the curators of Documenta 12 didn't seem to want to follow the rules." 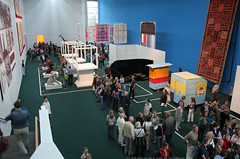 And irritated some of the critics were. The British broadsheet ones, particularly. The Daily Telegraph's Richard Dorment (he's written a book about Whistler, you know) called D12 "the single worst art exhibition I have ever seen anywhere, ever... a show organised by two pseuds and intended for graduate students and people who don't really like visual art at all".

Adrian Searle in The Guardian didn't like it much better. "Documenta 12 is a disaster," he said, deriding the curators' perverse streak of autocratic, pedagogic intent, their "quizzical attitude to painting", the strangely subdued atmosphere, the absence in person of Harvey Keitel (who featured in one of the videos), the guards "who inform you not to get too close, not to breathe on the glass, not to lean against the walls, not to carry a bag, not to point, sneer, laugh or break wind".

British art magazine Studio International fingered one possible reason the UK press were so down on the show: "It seems that Roger M Buergel and Ruth Noack were on a voyage of several years (or so it was) to find a lost magic kingdom of modernity. This, in their view, involves not a quest into the future but a rummaging in the detritus of history. They wholesomely (one cannot say wholeheartedly) impose that the curatorial model of today is now a covert neo-liberal model compromised by globalist capitalism, for which instead they seek to consolidate antiquated Marxist tendencies before they vanish forever."

Aha, "antiquated Marxist tendencies". Buergel is, after all, the man who, in 2000, staged an exhibition subtitled "Art in conflict with the international hyper-bourgeoisie and the national petty bourgeoisie". To combine this Marxist terminology with aristocratic gourmet tastes was unforgivable: at the press conference launching D12 Buergel unveiled two tidbits from the show: a Bach cantata accompanied by a deaf choir and a chef who made algae brittle and chocolate with wasabi. 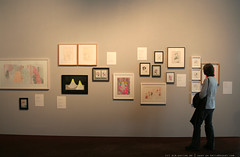 The curators quizzed for Frieze's end of year rundown had had a few months to mull the summer's blockbuster shows. By now the earworm was spinning its magic; many of them decided they liked the show:

"D12 was provocative in good and bad ways... it was enlightening to see the repositioning of so many key figures, especially women artists from the 1960s and 70s."
Connie Butler

"D12 was a wildly subjective curatorial indulgence, which is what made it so interesting... I can't help feeling that the curators' disregard for exhibition-making might come to be seen as an influential watershed of some kind."
Matthew Higgs

"D12 was my most rewarding exhibition experience this year, by some distance... it was a project that felt urgent and relevant."
Mark Sladen

"The discussions surrounding Documenta, combined with the ambition of the curators to pursue such an idiosyncratic agenda, were by far the most interesting social production witnessed."
Polly Staple

Some kind of consensus emerging there -- the "worst show of the year" may just have been the best.

But isn't that always the way? It's the things that stretch and challenge and intrigue us, the things capable of changing our minds, changing our ways of seeing, that end up being the most valuable to us.

Just looking at the slideshows, videos and photos, I can see that one of the things D12 was trying to do was re-make the art history of the last fifty years, tilting the canon towards quietly beautiful, purely colourful, extra-anglospheric, politically radical artists. Didactic displays documented the Grupo de Artistas de Vanguardia, or the dot paintings of Danish colourist Poul Gernes, or quiet and subtle Belgian Lili Dujourie, or Inuit artist Annie Pootoogook, who made this wonderful drawing:

Then there was Japanese artist Aoki Ryoko, whose work I saw once in a museum in Hiroshima:

Or David Aradeon's Movement of Forms, Antecedents of Afro-Brazilian Spaces, a table laid out with restrained costume drawings. Or Gerwald Rockenschaub's gorgeous flat colours and blocky shapes. Or Swedish video artist Johanna Billing's film (put together during a residency at Edinburgh's Collective Gallery) of boating on the Firth of Forth. Or the late Jo Spence's documentation of her terminal cancer:

Even the graphic design (by Martha Stutteregger indoors and Vier5 out) was oblique and mysterious, with something rational but also Rudolf Steiner-ish about it. This was, as Artnet put it, "a Documenta of peripheral spaces sparingly accented by discreet artworks" -- and signed with polystyrene blocks featuring a font based on Buergel's own handwriting.

Somehow the wrongness-becoming-a-new-rightness, old-taboo-becoming-new-template, marginal-becoming-canonical element here reminds me of Mike Meiré's work -- and how gobsmacked it's left designers, especially those on the other side of the pond.

But don't be too quick to sneer -- the object of your derision may just turn out to be an earworm, or even the future of the medium. "If you're familiar with art and design," wrote Michael Bierut in Design Observer, "you know the perils of condemning the shock of the new. After all, no one wants to risk being one of the bourgoisie sneering at the unveiling of Les Demoiselles D'Avignon or booing at the debut of Le Sacre du Printemps."
Collapse