A round-up of this week's architecture news. Dezeen reported on a plasma TV-shaped 63.02° house in Nakana, Tokyo by Schemata Architecture Office, so named because of the oblique angle it uses to tilt its big windows towards a cherry tree rather than the road it stands on.

In a body-blow to Sharkitecture, Life Without Buildings told us that the Architecture Foundation has scrapped its planned London HQ -- a horribly sharky angular fang by Zaha Hadid. In a piece entitled "Less Hadid, More Giant Women" the site argues that the proposed Lacaton and Vassal structure would have been a much better choice. It featured a giant model of a woman whose body stretched up through four levels of the building.

The Tokyo Art Beat blog reported the use of our old friend the Reversible Destiny Lofts in Mitaka ("live dangerously, live long!") for an art exhibition. It was also the week in which Alin Huma turned his apartment in Ginza into a temporary exhibition space for photographs by Naoki Matsuyama, Pete Toms, Arnaud Meuleman and Gilles Weinzapflen. The show runs until the end of the month. And while I'm namechecking friends, congratulations to Jan Lindenberg, whose bazaar-style recycled furniture project earned him a first class degree from Berlin art school UDK on Tuesday. You can see Flickr images here. 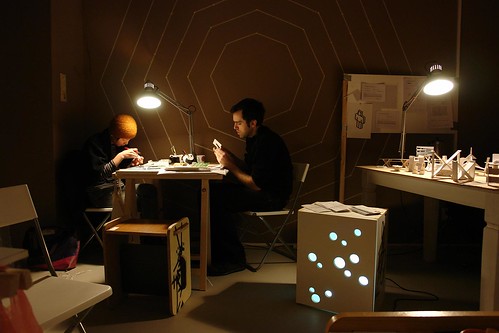 Speaking of Flickr, I also enjoyed the set documenting the construction of a sort of internal sleeping hut in Paul Baron's Tokyo apartment. The hut, by Point Architects (Ben Nagaoka and Masahiro Tanaka) is a space-efficient yet playful combination of a sheltered sleeping area and Atelier Bow Wow's mediapod / mangapod idea.

Speaking of Atelier Bow Wow, they're one of the architectural offices the Friends of the Great Pyramid have invited to submit designs for the buildings surrounding the enormous capsule necropolis being planned for the countryside near Dessau. The pyramid will sell eternal resting places in the form of individual units; the ambition of conceptualizers Ingo Niemann, Jens Thiel and Heiko Holzberger is that this sepulchre should become the world's largest structure, potentially housing the remains of everyone on the planet. Its proximity to the Bauhaus makes it tempting to call this "tomb for all people" the ultimate existenzminimum machine -- an exercise in "irreversible destiny loft dying", if you like.

I'm proud to say that I'll be performing my "timeless" song "What Will Death Be Like?" (the first ever live performance of the dead song) on March 10th at the HAU theatre in Kreuzberg as part of the Great Pyramid Gala, a special ceremony during which architectural designs for the site will be presented by a panel of judges including Rem Koolhaas and Miuccia Prada, and a winner announced. Other performers are Bill Drummond, Christoph de Babalon, Phillip Sollmann (EFDEMIN) and David Woodard.