"Typisch!" grumble the Berlin bus shelters; "Typical!" It's not a response to the transport strike currently afflicting the city, but the headline on an elegant series of posters for a new exhibition at the Jewish Museum, Typical: clichés about Jews and others.

"Are black athletes better than white athletes?" asks the blurb. "Do homosexuals have a particular appreciation for art? Are pipe smokers easygoing and do Jews have long noses? The exhibition "Typical! Clichés About Jews And Others" takes visitors on a journey through the world of images which aid us in our orientation every day. The exhibition shows objects, photographs, and audiovisuals that feature people or make statements about them, and explores how popcult objects, bric-a-brac, and historical collectors' pieces spread stereotypical messages."

The tone here is admirably even-handed; stereotypes are "images which aid us in our orientation every day". The text continues:

"At the core of the exhibition is the phenomenon that stereotypes and clichés permeate all areas of life and undergo constant reaffirmation and popularization. The exhibition confronts art, which also contributes to the creation of stereotypes, with objects of trivial culture. They are positioned next to works that grapple with the themes in hand. "Typical! Clichés About Jews And Others" inspires visitors to take a closer look, also at their own thought patterns. It not only sensitizes visitors to the presence of stereotypes in their everyday environment, but also to their brutality, as they are not least a breeding ground for racism and misanthropy."

This last bit troubles me, despite (or because of) the fact that it, too, is a bit of an unexamined cliché. Stereotypes are undoubtedly present whenever racism and misanthropy are present, but it's the causal relationship implied by the eugenic metaphor "a breeding ground" that worries me. Do stereotypes, in and of themselves, "breed racism"? And what happens when you link this idea -- as the Jewish Museum does in this text -- with the idea that stereotypes are everywhere, are necessary and even "helpful in our orientation every day"? Does that mean that "racism and misanthropy are helpful in our orientation every day?"

Whatever we call them -- types, archetypes, stereotypes, isotypes -- and whether we celebrate the brilliant reductiveness of Dick Bruna and Otto Neurath or the evil reductiveness of Joseph Goebbels and Bernard Manning, it seems (this week's theme here at Click Opera!) that essentialism is essential. Someone who couldn't see how much experience consists of repetitive patterns, and couldn't map the new to the old, would be overwhelmed by fresh information all the time and unable to function. Stereotypes embody big, simple ideas about complex masses of data. They're often wrong, but always telling. That's probably why the Jewish Museum has seen fit to swamp Berlin with images of Jews with big noses this month.

"I have already noticed a number of Jewish doctor types amongst the goats," wrote Kafka from the country sanatorium where he was trying to recover from tuberculosis. I know exactly what he means -- I can see those faces now! -- but I'm glad he said it rather than me. It's the same with this Typisch! exhibition. For obvious historical reasons, in Berlin only the Jewish Museum could have mounted it, and filled the city with these stereotyped Jewish faces.

Then again, racial stereotyping is perfectly acceptable in Berlin. The Scots, for instance, can be used as a symbol of all that's "canny" and "mean". Bargain stores like Schotten Eck and Mac-Geiz use Scottishness in their names and their corporate imagery as a direct connoter of bargains; see a man in a kilt, think immediately of an enormous reluctance to spend money. This is interesting because meanness is a stereotypical feature of both Jews and Scots, but only Scots can now be used to connote it.

I haven't yet seen the Typisch! exhibition, but I wonder if those Schotten-Geiz images are in it, since it's about "clichés about Jews and others"? I also wonder if, next to the images of Jean Paul Gaultier's "Collection Juive", there are any examples of Israeli stereotyping of Palestinians, or cartoons depicting European muslims as "Islamofascists". If -- because of what happened in the 1940s -- Jewish stereotyping has been taken off the agenda in 2008 (for all but the Jewish Museum), I wonder if more valuable and relevant 21st century social work couldn't be done revealing persecutions currently taking place, including those persecutions perpetrated by people once persecuted themselves.

We all count the pendulum swings differently, of course. Some are still living in the historical moment defined by the pendulum swing created by the kinetic energy of the holocaust -- in fact, some say the holocaust is such a huge event that this counter-energy will never expend itself and the pendulum will never start swinging back. Others feel that Israel's disproportionate and asymmetrical assaults on the Palestinians, and the fact that stereotyping in the era of the "global policeman" and the "world's sole superpower" favours the Israelis over everyone else simply because they are the Israelis (if the Iranians really wanted carte blanche to develop nuclear weapons without threat of American-led obliteration, all they'd really have to do, in this world, would be to be the Israelis)... well, others feel that all this sets the pendulum swinging the other way.

It may be that there's a kind of time lag between the things people do and the names they're called, and it may be inevitable that museums live, largely, in this time lag. They're always, in other words, fighting old wars, old evils rather than new ones. But when we get over-sensitive to the semiological correlates of historical stigma and brutality while remaining insufficiently sensitive to actual, active stigma and brutality, we risk over-reaction. We also risk portraying all representation of the "other" as negative, and making people so nervous about saying anything about the other that they hide the other from view. 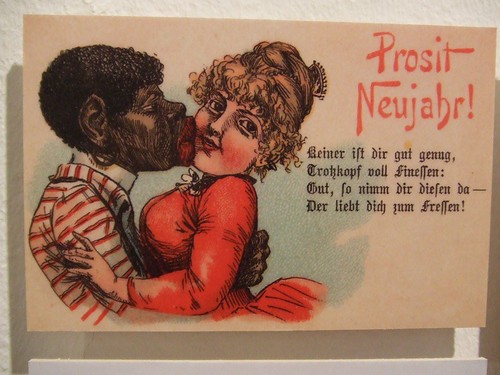 A recent exhibition at Kunstraum Kreuzberg showed German imperialist images of colonial peoples. It was rather startling to see images of black people so widely used in the commercial visual material of a century ago. A new year's card, for instance, showed a German maiden being embraced by a stereotypical negro. The verse underneath ran:

None, for you, is good enough
Elegant dreamer, curly top!
Good, so take yourself a love
Who'll gobble you right up!

Cannibalism, sexual voracity, exaggerated physical difference, all the stereotypes are in play. But look, a black man is embracing a white woman and they're both apparently enjoying it! Today's German New Year's cards wouldn't dare do anything so bold. Images of black people -- and images of Jews -- are entirely absent from them. That's because today's Germans are "more sensitive". Hurrah for progress, half a cheer for the total invisibility of the other, and two-and-a-half for Typisch for bringing the Jewish stereotypes back onto Berlin's streets.
Collapse