"You know this familiar situation," Pingmag's Chiemi confided in her readers the other day, "every time you visit an office, you are curious to see how creative folks and artists actually work; how your dream job’s desktop would look like. Creative inspirations cluttered all over or structured order of mind on a neat desktop? ...Let’s peep at various desks of Brits and Japanese working in the creative industry."

It strikes a slightly odd note, that intro. Are offices really the place to find creative folks and artists? Am I overwhelmed, on my occasional visits to offices, with an aura of powerful creativity, a whisper of charisma, a whiff of artistic glamour? Frankly, no. But I do love to see the spaces other people work in. I ran a similar feature on Click Opera last year when I asked readers to Show me your workspace! And last night, presenting my visual field recordings at Program Gallery, the high point of my evening was getting a tour of the non-profit's incredible workspaces. 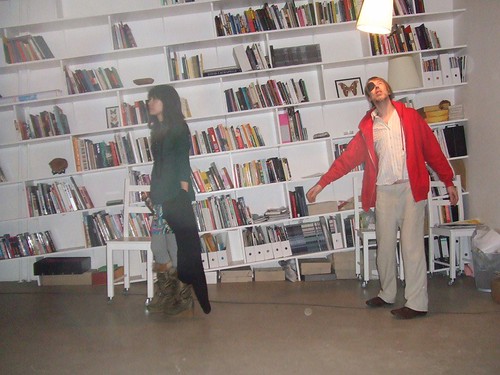 The back office at Program seemed to go on forever (I noticed Click Opera framed on one of the computers), and behind it there was an amazing, dizzying room with slanted shelves and twisting ceiling lamps, designed by gallery founder Carson Chan. This room really made you feel as if you were in a sinking ship, or in the middle of an earthquake, or a mutating character in "Alice in Wonderland". By imposing two different planes on each other it did exactly what I'd been describing in my talk -- it created a sort of conceptual schizophonia, producing an imaginary third space from two superimposed ones. 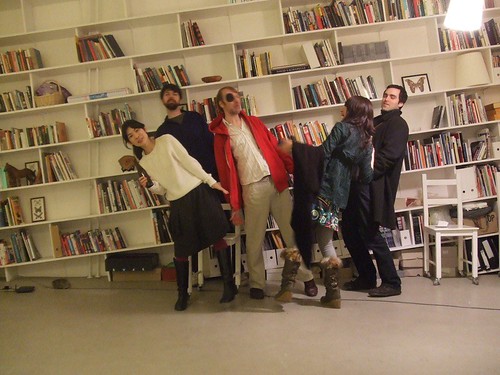 The room is a transitional space in between the gallery office and the back apartment currently being occupied by Australian artist in residence Jodi Rose. As befits a transitional space, it's full of wheeled chairs; the "work" to be done here would presumably be reading the lush art books stored precariously on the shelves while skidding around the concrete floor on a straight-backed wooden chair. Now that's creative work to aspire to -- if you aren't (as Hisae was) sickened and dizzied by the room's weird non-tilting tilt.

Program's focus is on the relationship between art and architecture -- their next show sets a scale model of the gallery space within the gallery itself, which will also create a weird resonance in the minds and nervous systems of the people who experience it; an Alice in Wonderlandish impression, I shouldn't wonder.

I ended the Visual Field Recordings evening by projecting into the gallery a visual field recording of the gallery itself, so that the people in the space were effectively watching themselves. Stopping the film, I made a mock protest: "This is everything that's wrong with today's art," I pretended to rant, "in which everything becomes an ouroboros, a snake eating its own tail, and meta feeds on meta!" (Jodi Rose responded: "Smartypants!") I expect this account will now flash up on the gallery's computers, and everything will come, even more dizzyingly, full circle.

Meanwhile, tonight at HAU1 in Kreuzberg I'll perform at another architecture-related event: the gala ceremony in which Rem Koolhaas will announce the winner of an architectural competition for buildings around the Great Pyramid, a planned necropolis near Dessau. I'll play -- for the first time ever live -- my 1987 song "What Will Death Be Like?" Show me your deathspace, skeletons!
Collapse