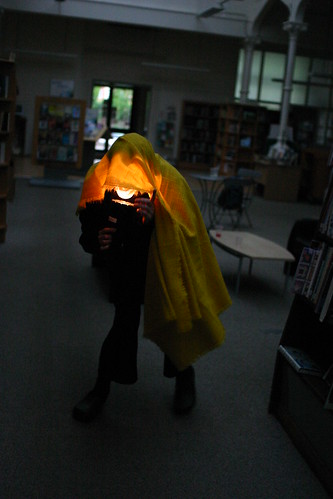 kineticfactory, who blogs his account of it here) was a rather magical and encouraging extension of the "site-specific storytelling" and "improv vaudeville" I've been doing recently -- a blending, in fact, of my rock shows with my art shows, and a promising probe into future possibilities (like the Hide and Seek Festival event I'll be doing during the last weekend in June, turning London's South Bank into Tokyo).

In the gathering darkness of Richmond Library, between the hours of eight and nine, for an audience of perhaps twenty souls, I appeared in the persona of Hieronymous Proctor, a Scottish "spirit medium of print media" or "procurator spiritual". Dressed in black and sometimes draped in a yellow blanket, I sought to reveal and release the spirits of dead people trapped inside the books, leading members of the audience over to specific volumes to choose and read a sentence at random, a message I would then parse for its hidden spiritual contents. "Peggy turned on her heel and walked away" was thus revealed to mean "Here on the endless plain of eternal anguish, we the gibbus dead are forever crossing the threshold into new realms of suffering and degradation. Help us!" 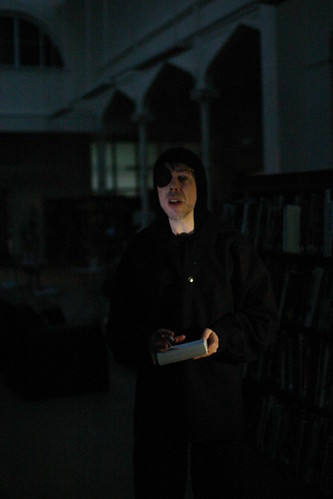 Using the stage door torch from the production of Madame Butterfly going on next door, I lit my own features from below, spun round with a scream, pointing the beam at a creepy fan window high up in the wall and claiming I'd seen a face there, or spotlighting shelves ("like the charred branches of lightning-blackened trees, on which crows and ravens perch") and explaining how the Dewey decimal system will be used to classify us in hell, or how book bindings in fact bind unwilling spirits into the books, trapping them there. I even performed a mini-exorcism on an accountancy textbook.

In between, there were songs -- Beowulf, Ichabod Crane (a new Joemus track, premiered live here, and compared by Kineticfactory to Talkshow Boy), Robin Hood, Scottish Lips and Lucretia Borgia. More pictures here. Oh, and I played the solos on a white Stylophone! HMV are selling them for fifteen quid.
Collapse