I think my favourite Lullatone album is still the first one, Computer Recital. For me, it's a record like Eno's Discreet Music -- one that never loses its power to charm. It tinkles where Discreet Music flutes, but they share something primally gentle. E*Rock gave me Computer Recital with a batch of Audio Dregs releases back in 2003, and it was easily my favourite of them. Already a fan of the "cute formalism" of Nobukazu Takemura's Childisc label (Lullatone would later record for them) and Raymond Scott's Soothing Sounds for Baby series, I was in a way the record's ideal listener.

My feeling about the three subsequent Lullatone albums (2004's Little Songs about Raindrops, 2006's Plays Pajama Pop Pour Vous and 2008's The Bedtime Beat, which Shawn just sent me) is that some of the techno purity has been lost: with the addition of Yoshimi's vocals, Lullatone has become an indie band. They almost sound like Kahimi Karie at times, but it's a Kahimi who's somehow no longer adult.

In other ways, though, the purity of the Lullatone project hasn't been diluted by a single raindrop. The band's abiding themes are sleep, childhood, charm, naiveté, cuteness and minimalism. And whether Yoshimi sings or it's just Shawn doodling with his Casio SK1, there's always something of the space visitor about them -- and something of Mr Spock about Shawn. The emotions, the problems, the experiences that make people adult don't seem to apply to Lullatone. They seem to have skipped them altogether. They're the very opposite of Emo. 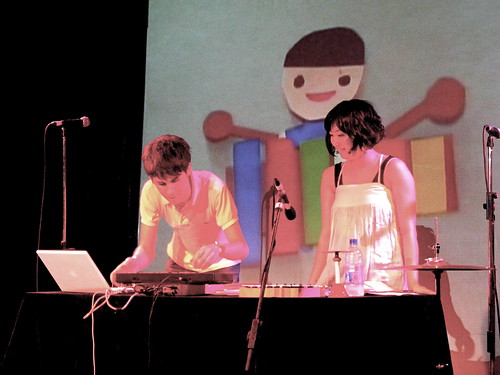 Meeting Lullatone was one of the high points of last year's Japan trip for me. I found that in person, as in their music, they had some kind of shadow side offsetting the carefree naiveté. I don't mean that I think their lovely big white house in Nagoya has a torture dungeon -- I'm sure it doesn't. But Shawn did seem particularly -- almost suspiciously -- interested in building hypno-suggestion into his music. So I introduced him to Alastair, a hypnotist friend, who proceeded to freeze his arm using nothing more than a string of clichés about creativity and self-empowerment. 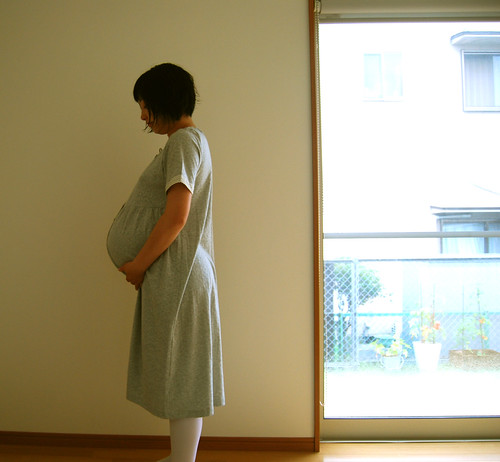 Recently something extraordinary has happened, something which proves that Lullatone are adults. Yoshimi has got pregnant. Heavily pregnant; she's due to deliver her first child in a couple of weeks. As one of the comments below the Flickr picture puts it, it's "such a surprise, i see you like two little kids".

Can kids have kids? Or are the childish themes -- splashing at bathtime, romping in pajamas, teddy bear music parades -- simply evidence that Lullatone (who married in 2005) have been putting together, piece by piece, the perfect child environment, the dream playroom? Yesterday, with these questions in my mind, I had a bit of a revelation. I was in a bookshop on Falckensteinstrasse, a place Hisae and I always stop at. It's beautifully designed, this place, and at the back they've laid out a little room with a kidzone, full of the kind of signifiers hip Kreuzberg parents want to associate with their children. There's a little table from OK, the cute 3rd World goods store on Alte Schoenhauser Strasse, showing people from all over the world laid out in an illustrative chart. On it lie books about anthropomorphised animals, but no crayons, just in case the kids are tempted to scribble on the merchandise. When I was in there yesterday there were no kids in the store, just this corner arranged "for kids", but actually, it occurred to me, a completely adult space, made by adults with adult ideas about childhood; what it is, what it should be.

It's time we accepted that "childhood" is something -- something benign -- that adults impose, sentimentally, didactically, on their offspring. It's an invention of adults. Left to their own devices, kids reject "childhood" at the earliest possible opportunity, embracing sex, drugs, cigarettes, guns and knives. The press reported the other day that victims and assailants in UK knife-crime are getting younger, from mid- to early-teens. The UK has seen a spate of child-on-child gun crime recently too. Of course, this reminds us of how childhood has become a class signifier: lower class kids get "adult" sooner, upper class kids stay children as long as possible. "Childhood" in this sense just means protection and privilege. Maybe the Falckensteinstr. bookstore laid out its child corner primarily as a class signifier.

But if childhood is something adult -- a particular arrangement of a room, a behavioural etiquette adults can use to relate to other adults -- where does that leave us? Well, it would certainly disarm the criticism that Lullatone are an "infantile" or "twee" band. Childish themes, for them, are what Modernism was to Mondrian, what sex was to Gainsbourg, what technology was to Kraftwerk -- a totalizing system, an etiquette, a radically-purifying regimen, a life-plan, a style, a belief. And just as child themes are really adult, tweeness embraced this wholeheartedly is almost a kind of machismo, a bold "Fuck you!" to harrowing cares, to conformist angst, to responsibility.

Nobody who was simply childish would drop references to Italian designer Bruno Munari (also referenced in the sleeve for my Ocky Milk album), and nobody who was simply sleepy would invoke Raymond Scott's experiments with minimalist lullabies. And we haven't even gone into the whole Asian cuteness-collectivism dimension -- the fact that Lullatone (like Scott's Manhattan Research) have set up a jingles unit called Lullatone Melody Design, to make music for TV and exhibitions. They've already worked with NHK and Chanel. When Lullatone are interviewed, it's not by Western music magazines, but by Marie Claire China, where they talk about their cute eco bags. The cuteness works perfectly with Asian commercial culture, because it's non-aggressive and appealing, an aesthetic that finds a common denominator in our collective consumerist desire to escape to the reassuring togetherness of toddlers. Clearly, though, no toddler could make a commercially-appealing version of toddler culture, just as nobody sleeping could make music which expressed the concept "sleep".

Lullatone are adults, all right -- one hell of a slick organization, and the cutest formalists in town.
Collapse