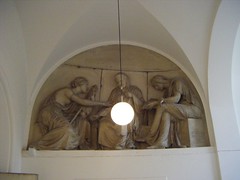 For some reason -- partly because they're readers of this blog -- I've got friendly, over the last couple of years, with a bunch of students at UDK, the Berlin art college, and specifically from the Art in Context course there. This weekend the UDK opened its doors for its annual Rundgang, a degree show or "walkabout" so vast that one visitor we saw had opted to do it on rollerskates. 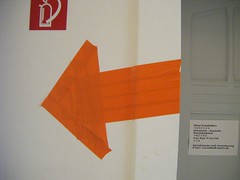 There was certainly enough on display to eat up, delightfully, an entire afternoon. Building after building, studio after studio, floor after floor was filled with new student art -- plus the obligatory paint-spattered stools, niched classical friezes with broken fingers, orange gaffertape signage, filthy fridges filled with beer, and other signifiers of eternal art school bohemia. 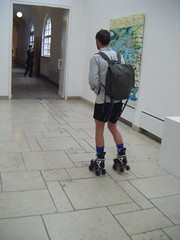 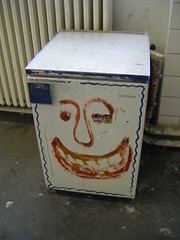 It almost felt like a biennial, but with a vaster range between the awful and the excellent.

Aus Dem Context, the Art in Context room, was undoubtedly the best thing in the whole school -- and I don't just say that because it's my friends' department! In contrast to the stale rooms of paintings and sculpture elsewhere, Art in Context's multi-disciplinary, meta-ish, museum-like, curatorial approach felt much better in tune with what's happening in the wider art world, as well as being much better connected with society.

There were displays devoted to "the flea as metaphor", Relational Aesthetics tables where "art advisors" guided aspiring artists through the likely pitfalls of their chosen careers, models of the monkey houses at Berlin Zoo, a section about experimental chairs, and a corner by Viola Thiele -- one half of a band called Mosh Mosh -- about the crossover between art and pop music which included big panels about Miss Le Bomb, David Bowie, Sun Ra and Goodiepal. This excited me because I've just written a song called "Goodiepal". Thiele spelled his name wrong in her presentation ("Goodypal"), but redeemed herself by offering this excellent picture of the reclusive Danish electronic music genius:

I think my favourite piece was a chart of elephant representations by Uli Westphal, Elephas Anthropogenus, a tree diagram showing the way humans have classified and represented elephants over the centuries. When we see such representations in museums, it's usually the elephant which is seen to evolve over the millenia, from mammoths to today's Indian and African species. In Uli's diagram (from her diploma Vom Elpendier zum Olifaunt) it's our own perceptions which change, from the ludicrously phantasmagorical to the banal.

It's also a piece about drawing, about hermeneutics, about the style of didactic design, and about a certain German pedagogy. I can't help relating it to my Click Opera piece The blind gaijin and the Japanese elephant, which was also about how we know what we claim to know, and how we draw what we see.

More rundgang pictures on my Flickr page. Oh, and if you're in Berlin, don't forget that I play tonight at West Germany!
Collapse