This time last week I was staying with Craig and Krista on the Byker Wall estate in Newcastle. My sense of deja vu at Byker is perfectly explicable: I'd seen an Open University documentary about the estate years ago, and remembered how it turned its brick back wall to the motorway and, on its green inner side, filled the space with elevated walkways, brightly-coloured roofs, balconies and playgrounds. 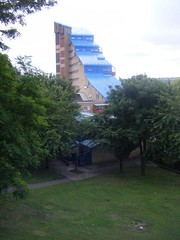 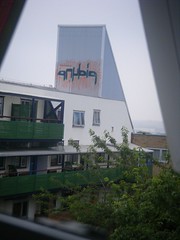 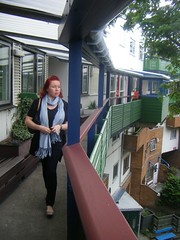 The colours on Byker were refreshing, and there was a good feeling, some kind of mixture between the humane and the futuristic, some vision of a social utopia based on harmony and community, high density and state provision.

Here's the Byker design team -- led by Ralph Erskine, seen on the left -- at work on the project in the 1970s. Byker Wall went on to win lots of design awards and get a Grade II* listed status, but Erskine made only one other significant building in Britain, the London Ark in Hammersmith. His company, Erskine Tovatt, was based in Sweden, and his ideas are perhaps more Swedish (or, in a wider sense, European) than British (or, in a wider sense, Anglo-American). Which is to say that they're essentially social democratic and statist rather than libertarian-individualist. 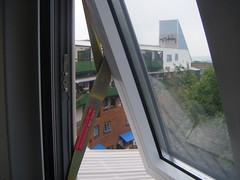 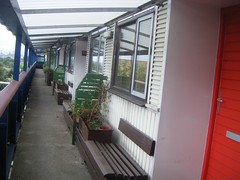 Erskine died in 2005 at the age of 91, but he still stands for certain ideas which I wanted to contrast today with the ideas of another ethical building pioneer, Michael Reynolds. Let's watch a clip of a documentary about Byker, then a clip about Michael Reynolds.

Now here's a trailer for Garbage Warrior, the new film about sustainable architecture guru Reynolds. I was turned onto this by Joe and Emma, who are about to move to Aberdeen, and have been thinking about getting an allotment and growing their own vegetables. They're very interested in finding sustainable buildings in the Reynolds style in the UK (there are a few, apparently). Emma talks about Reynolds here. Anyway, here's the trailer for the film they saw about him:

When I was visiting Glasgow, I expressed some reservations to Joe about Reynolds' style. I think his utopia and Erskine's are very different. It's the difference between communal solutions and libertarian ones.

"Just because you're hooked up to a municipal water system and power system, it doesn't mean that those things are always going to be there," says one occupant of a Reynolds sustainable house. It's hard to imagine what kind of cataclysm would make communal water and power systems unavailable to modern people, or what kind of paranoia could make you organize your life around it, but this mindset -- whether realistic or not -- is a classically American one. It ties in with a whole set of pioneer and maverick and outlaw imagery -- essentially individualist imagery, basically Protestant and even apocalyptic. End times are on the way, Christ is coming back, only the saved -- who've retreated to self-contained communities out in the wilderness -- will surivive, blah blah blah.

So, when we look at Reynolds fighting the government to get his admirably sustainable buildings legally recognised, we can't help thinking of the Waco siege, of survivalists and revivalists who see law and government as their enemies, of settlers moving Westwards in a typically-American quest for riches and "manifest destiny". Behind the idea of a self-sufficient building is the idea that society and the state cannot be trusted, and ought to be shunned. It's every man for himself out there!

This "devil take the hindmost" attitude couldn't be further from Erskine's European vision of social architecture, in which the state is a benign provider, and basic power and water and communications networks are assumed to be there in pretty much every possible scenario. Instead of withdrawing from social networks, Erskine's vision draws people closer towards them.

Rather than the state and the law, Erskine's demon is the car. The Byker Estate turns a frosty brick wall on the nearby motorway, and the planning assumes that cars will be left at the edges, and that in the centre and up on the skyways people will walk, and children will play.

Erskine was a community architect, which means that he got the people who were going to live on the estate involved in the design, even though the state was responsible for funding (as it now is for restoring Byker) and he signed off on the aesthetics. 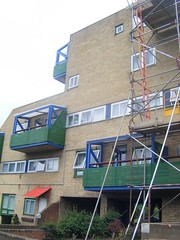 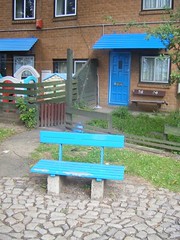 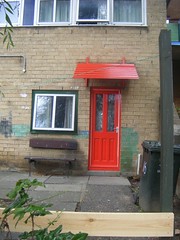 There's an interesting pdf of a talk he gave which describes Erskine's feelings about the libertarian-individualist-commercial landscapes of America. He basically rejects Robert Venturi's idea that we can "learn from Las Vegas" (and Venturi's 1972 book is absolutely central to postmodernism, and to the idea that we can get something positive from the sprawl of capitalist anarchism):

"Venturi talks of learning from Las Vegas," says Erskine. "Clearly his experience of this settlement differs totally from mine. Are we just different people or are we from different cultures? Do we learn very different things? I came to Las Vegas as should be –- over the desert pass in the evening light and there in the sterile desert valley glittered the “Best Nest of Sin in the World”, fulfilling all my expectations for intensive enjoyment of visual stimulation and moral indignation. 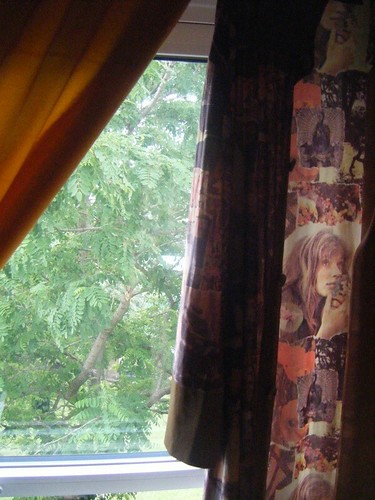 "I should have turned and left -- not to avoid sin but to avoid disillusionment. Las Vegas and the “five mile strip” was for me only a mess and a dreadful bore of tatty hotels and tatty churches and tatty parking lots, sporadic neon and bored disillusioned people pulling on endless rows of one-armed bandits in tatty hotel foyers. All sadness and no fun. If there is any point in sin it should surely be entertaining?"

He goes on to contrast Las Vegas with high-density development in Japan: "Compared with the Ginza, Shinjuku or Asakusa in Tokyo, it was for me boringly provincial, incompetent and ugly and most townships in the deserts were poor variations on a similar theme. I have suffered similar disappointments in Florida. It was NOT my model for architecture or community planning, but since my delight is a world of differing cultures I could hope that Americans are happy with -- and with greater success can cultivate -- the American city, but equally I could hope that in Europe we can appreciate and revive many of the undeniable and most specific qualities of cities of the Old World.

"Not for me however, are the Baroque town plans of Europe or the Imperial city of ancient Peking –- those expressions of might. I would find the medieval city more apt for democracy should I seek a model. In these we find individual buildings expressing great power, but the city is the result of and expresses a multitude of decisions and therefore a multitude of varying situations, experiences, usefulness and creates the aesthetic of discovery and surprise."

The dense medieval city -- like Ginza or Asakusa -- is a place where people seek thoroughly social utopias. Rather than fleeing to the desert to escape the wicked cities of humankind and await the cleansing destructions of some promised god, they find a political solution in the organisation of people. Rather than separation they seek togetherness.