1. I'm fascinated by the way I glom onto the glam of people's personal styles. Joe Howe and I are collaborating, and last week I stayed at his Glasgow flat, and found myself taking "snooper snaps" of what he had on his walls. The results scatter this entry 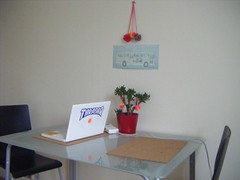 and my Flickr page. This first one shows Joe's iBook, with a sticker advertising his new Germlin album THRASHR. I'm just about able to identify the sticker as a parody of Thrasher, the skateboard magazine. And that "just about" is what this entry is all about.

2. Today Hisae and I have been tidying our house because Joe and Emma arrive in Berlin this afternoon and will stay with us for a week or so. Then it'll be their turn to spy, to assess, to glom. I wonder what they'll make of the things we display? 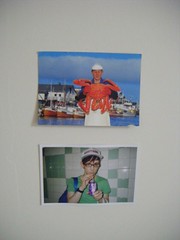 3. Walking with Joe from Sauchiehall Street towards Recoat Gallery and Chai Ovni last week, I raised the subject of this "glomming" process. I wondered how people would see our collaboration -- as the vampirism of middle youth? I cited a Toby Young piece in the Modern Review years ago about how young people no longer have their own distinctive culture, because "middle-youthed" kidults are lurking like vampires, waiting to steal their style choices and adopt them as their own. (Emma, Joe's girlfriend, explains these pictures: "My side of the bed, hence picture of Joe! He sent the crab man to me from a ferry in Norway.")

4. This overlaps with the pigs in the pipe phenomenon. Babyboomers outnumber and can outspend the youth, and so they enslave them stylistically, as ants enslave aphids, turning them into "cool cows". Is this what I'm doing, collaborating with Joe, who, at 24, is half my age and ought to be defining himself against my tastes, rather than with them? 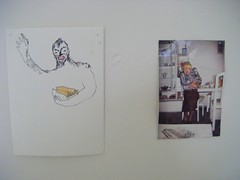 5. But surely "da kids" can always come up with something new and distinctive when middle yoof kidult vampires swoop and start taking snooper snaps? ("The one on the left is called 'Werewolf with Fish Supper'", explains Joe. Oddly enough a lot of comedy horror has crept into the JOEMUS album; songs about Dracula and Ichabod Crane. Should we, in fact, title it "Bloodsucker with Fish Supper"? Or "Glomming Snooper with Fish Supper?")

6. Mightn't this be a "timelord phenomenon" rather than a "vampire phenomenon"? In other words, mightn't this be about how someone rather Dorian Gray-ish would find different cultures -- and yet, somehow, always the same culture -- depending on which decade they landed in? If I think of myself at 20, I'm discovering Josef K, The Passage, Magazine. I think if I were 20 now, I'd certainly be into the same culture Joe is into -- skate and street art culture, Paper Rad and AIDS Wolf and all the rest of it. But just look at Paper Rad's website! It looks like a MySpace page from hell! And that's definitely bad, isn't it, Nicholas? Or maybe it's good?

7. And what if I were 15 or 12 now? I didn't see my nephew and niece Robbie and Ellie this time in Scotland, but my sister showed me PhotoBooth videos they'd made. Ellie mimed along in one to Rockstar by Nickelback. I was slightly appalled -- it seemed to embody values of "aggressive normality" I'd never embrace, even if I were only 12. (Me at 12: Bolan fan.) But who knows? Perhaps I'd be sufficiently indifferent to nearly-exhausted 21st century pop music to think it was okay, and my creative focus would be -- as Robbie's is -- on computer games. 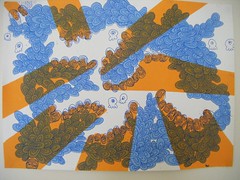 8. It gets very complicated. This is about taste, but also about age and social class and educational level. It's about seeming to break free of the determinism of category: I can "join" Gay Against You in 2008 the same way I seemed able to "join" Josef K back in 1981, leaping an age gap as easily as a class gap. (Emma tells me this image is by Seripop, aka Montreal's AIDS Wolf.)

9. Actually, the age gap might be easier to cross. Joe and I were surprised -- and also not surprised -- to discover that our dads had both taught high school classes in Perth when we were young. And Joe and I both have English Literature degrees from Scottish universities. Which means that, in Bourdieu's terms, we have almost identical educational capital. 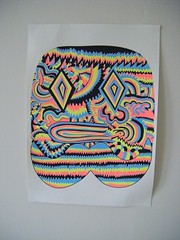 10. I "read" Pierre Bourdieu's Distinction: A Social Critique of the Judgement of Taste while helping a fashion student pass her course at the London School of Fashion. There's no way to avoid quoting it in this discussion -- it's absolutely the key text about taste and how it relates to class and education. The reference points may have changed, but many of Distinction's points stand today. ("This is by Andreas Banderas," says Emma. "Joe still owes him a trade for this. Bad Joe.")

11. Bourdieu outlines the links between personal taste and educational attainment. His book is partly based on a 1960s survey which looked at the cultural goods consumed by 1217 French people of widely varied social status and educational achievement. Bourdieu found that cultural tastes were strongly linked to educational capital and set the various classes in a clear hierarchy. The haute bourgeoisie listened to Bach, the petit bourgeoisie to "minor works in major genres" (ie Strauss waltzes) or "major works in minor genres" (ie Brassens and Leo Ferre), the working classes listened to, you know, Petula Clark.

12. Bourdieu's analysis doesn't pay much attention to kitsch and camp or to the postmodern collapse of high and low art, and these things have made the landscape of taste vastly more complicated today. What do I make, for instance, of 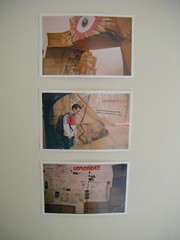 Joe's decision to curate a bunch of Iron Maiden videos -- well, okay, a 20th Century Box documentary from the early 80s about the UK heavy metal revival -- on his blog?

13. The answer to that question is that although at the time Iron Maiden would have connoted a very low class taste indeed, it could well now have changed its meaning and be an incredibly cool thing to be into. I can certainly hear something of Ver Maiden in Joe's music -- the riffology, and the way the time signatures change, for instance. And in retrospect there's a certain power to the music that a lot of the contemporaneous music that connoted the correct class doesn't have.

14. I think the year the nu-metal doc was made I was mostly into David Sylvian's somewhat wishy-washy pastel neo-aco odes to Jean Cocteau. Who knew that, you know, skateboarding and Ryan McGinley were going to come along and make metal riffs a much cooler, higher-class cultural reference than stand-up basses and snatches of Holger Czukay? 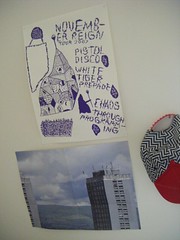 15. Am I too old to turn coat, to rewrite the history of my personal taste and claim I was into this stuff all along? Probably, but I do experience a little thrill of betrayal just thinking about it. And my love of paradox makes me rather pleased that the same furniture could be standing in such different positions in the same room, and mean something so very different. I wonder what Bourdieu would say? (Joe says the lower image here -- the photo of a man tightrope walking between two residential towerblocks -- is from a Catherine Yass piece.)

16. I'm prepared to believe that everything I know is wrong, but secretly I think that I instinctively know when something is right. It's just that it's different things in different generations. The quest -- the philosopher's stone, the fountain of youth -- is all tied up with finding where it might be now rather than repeating endlessly where it was back then.

17. Duglas Stewart from BMX Bandits said after my show at Stereo "Must try harder!" I immediately assumed he meant me -- that I should try harder -- but he explained that he had to try harder. It's really rare, he said, to be exposed to something that makes you feel that you could be raising your game, that you've only scratched the surface. It's unusual to find something you want to glom onto, to find a flat you want to snoop around and snap, a style you want to bite, or fresh blood worth drinking. It's this valuable sense of the inadequacy of the here, that appetite for there, that I crave. Pure lust, pure glamour, pure glom.
Collapse