2000 kilometers -- on relentless autobahns and autostrade, up and down mountains, your Renault Clio being rudely rammed by a truck -- is too much to drive to see some art. But what great art (and what great atmospheres in what great buildings) Manifesta 7 gave us! 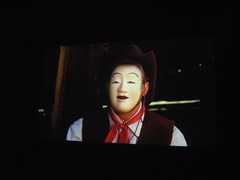 There's a two-tier, a twin-track system: the stress you feel on the highway, when a single lapse in concentration could kill, and the ease you're supposed to feel at your destination. In the car you must be sober, adult, responsible, tense, manly. When you get out you can be childish, irresponsible, silly, playful, spontaneous, original. Nobody likes a spontaneous, original driver. Nobody wants to drive behind Captain Beefheart ("How original, Captain, no lights at night!"). 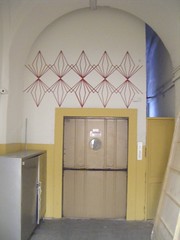 After the excruciatingly long drive, to enter Ex-Alumix -- a disused aluminium smelting plant in Bolzano, something like a cross between Tate Modern and the Palais de Tokyo -- is a lift and a rush. Suddenly all's right with the world. This is what it's all about! This is interesting, and intelligent, and sane, and controlled, and just. It's better than drugs or champagne. The space is huge and lit from high windows. Cranes and pulleys still hang from the ceiling. It has the dimensions of a cathedral and a railway station, and gives you the feeling of uplift and onrush. It's better than that monstrous construction, the cantilevered road blasting across the high mountain pass. The light in this building is beautiful. Who'd have thought that industrial spaces could die and go to heaven in quite this way? That they would have this kind of afterlife? 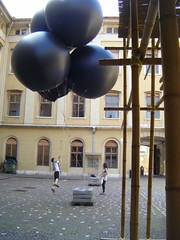 The curators have laid out toys and sociological studies, surprises. A sort of climbing frame to clamber up, a Swedish pirate bus, an audio installation in the cellar, a diseased Russian doll, some Indian ladies working, some black helium balloons that lift you up into the sky, some phonograph records next to videos of rotating old ladies' heads, a book of inexistent flora, a man walking on the ice in front of an ice breaker, piece after piece rewards your attention with some sliver of poetry.

Clio rammed by a truck 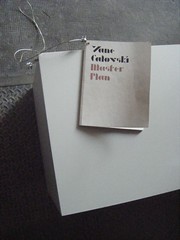 Do you want to hear about my collision with the truck? The exit from the B12 to Innsbruck West was being worked on. It was narrowed. The truck in front of me didn't know this, and sped towards it, saw the dimensions, then slammed on the brakes so hard the linings burned. I stopped in time, but without looking behind the truck driver threw his monster into reverse and hit me, pushing me back into the stream of the highway. I blared my horn, but he never heard, and made off before we could exchange insults and insurers. My car's nose was put out of joint; later the Clio grille flew up and over the windscreen like a stray flip flop.

Binaries on a mountain 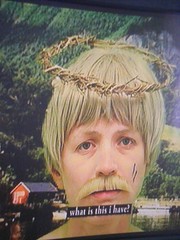 At the police station in Innsbruck there's a picture on the wall: a young, chic Austrian woman stands on a mountainside beside an old rural man in lederhosen. This picture -- I had time to speculate, as the broad-skulled policeman tapped out the traffic accident report -- combined an amazing number of binaries: old / young, rural / urban, short / tall, male / female, traditional / modern, poor / rich, old / young, ugly / pretty, functional / decorative, agricultural / consumerist. You seize all this in a second or two, and laugh. It's about Austria.

Futurism led to roads and buildings 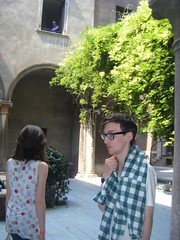 Curator Adam Budak mentions that some of the Futurists were raised in these South Tyrolian valleys. I can see how the spirit of Futurism informs the anti-humanist clamour of the autostrada, and even the rude fist gestures Italian drivers make (when you push out into their traffic flow and falter rather than forcing your pace on its pace). Of the four northern Italian towns involved in Manifesta, we skip Fortezza because the place is too small to have its own autostrada exit (Marinetti would have approved). It's also clear that the Futurists helped pave the way for Italian fascism, never far away in the architecture here. Deco is never innocent in Italy -- it's always, possibly, on the side of Il Duce. So there's something creepy about Trento's Palazzo delle Poste, no matter how wonderfully bureaucratic are its corridors, how monastic its fountain-equipped courtyard. 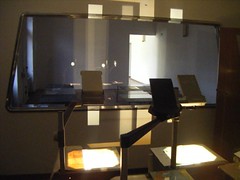 I want to film and photograph everything. There's so little time -- just a day to visit four towns and walk through so many installations -- and so much work. In Trento there are mini-museums within the Palazzo: the Museum of European Normality, the Museum of the Stealing of Souls, the Museum of Personality Testing. 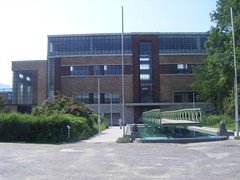 We have to expand our definition of the centro storico -- the storied city centre, the historical tourist district. Towns must now include their gigantic former working spaces -- their 20th century refurbished industrial ruins -- as part of the centro storico. The story must now include hammering, smelting, packaging and posting. (Written with the Thinking Allowed suburbs special in mind.)

Does art improve you? 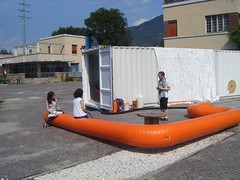 I ask Joe and Emma whether they think art improves them. Not morally or ethically, but in terms of making them more creative, perhaps. They say yes. They'll make better songs after looking at art. They'll be enriched by it, be able to imagine better, relate better. I ask them if any of their friends hate art. No, they answer, but some fail to pay much attention to it at openings, preferring to give their attention to friends. That's understandable, I say.