A month ago I received a strange, friendly email from a man called Alexander in the Ukraine, the director of a hi-fi company called Sound Sound which makes and sells loudspeakers. "We are simply the music and good sound lovers," Alexander explained. "Three years ago I discovered two discs "Oskar Tennis Champion" and "Ping Pong"... I enjoyed with your music so much (and not only I but many at our company) that we decided to name new Sound Sound loudspeaker line Momus".

The mail included photos of the Momus speakers, and a shot of the Dnieper Hydroelectric Station in Zaporozhye. "I listen to all true music from Residents to Frank Zappa, from Tom Ze to Johnny Dowd," Alexander added, ending with impulsive generosity: "We have an idea to present you the exclusive loudspeakers Sound Sound Momus 1."

"This is a surprise indeed!" I replied. "I'm honoured that you have a speaker line called Momus! It's somewhat ironic, I must say, because I have always used very poor quality speakers for my home recording and music listening -- I suppose the logic is that if music sounds good on bad speakers, it will sound even better on good ones, whereas music that sounds good on good speakers might well sound terrible on the cheap ones many people have!"

A couple of weeks later, I received a card in my mailbox saying the Momus 1 speakers had arrived in Berlin and were waiting for me at the dreaded Zoll office in Schoeneberg. You'll understand why this customs office is dreaded when I tell you the sequence of events that awaited me when I got there:

1. Queue 15 minutes or so to register for a case number.
2. See an officer and hand over paperwork.
3. Get sent to waiting room to sit with other lost souls.
4. Get summoned by PA back to the other room to meet again with officer to discuss case.
5. "Where is the invoice?" Attempt to convince officer that package is a gift ("90% of packages we get here are described as gifts.") Suspicion aroused because I can't pronounce -- or even read -- Alexander's name, which appears in cyrillic script on the documentation.
6. Officer leads me to computer to print out email from Alexander proving speakers are a gift.
7. Proof is located and accepted, but tax is still payable at 13%.
8. Stand by as officer opens and inspects the package, then closes and re-tapes it with official Zoll tape.
9. Sent back to lost souls in waiting room.
10. Called on PA to pay tax duties at cash desk.
11. Take payment receipt (€26) to officer, who hands over package.
12. Struggle home on u-bahn with heavy box, having spent, in total, about two hours on this Zoll business.

1. An iMac with built-in speakers -- the most-used of all my sound systems.
2. A set of Harman / Kardon sound sticks which connect either to the computer or my video projector for slightly better sound when watching films and so on.
3. An old East German record deck with its own speakers,tuner and amp, also used for an old Tesla reel-to-reel tape deck.
4. A ghetto blaster with semi-detachable speakers, used for listening to cassette tapes.
5. Various musical instruments, microphones etc and a mini-mixer containing a pre-amp for recording.
6. An iBook used for playing torrent files into the projector.

Each of these sound-producing devices comes from a specific era and a specific geographical location, and each comes with its own set of connectors.

Because of all these different audio cables and connectors -- each with its own era and its own zone -- it's well-nigh impossible to connect all the audio devices in my living room to each other. A clunky patch bay allows the Harman / Kardon speakers to be activated by the iBook, the iMac or the TV, but it involves a lot of unsightly extension cables, mostly of the type that start with a mini-jack and end with RCA connectors. These sagging extension cables have to be kept off the floor, otherwise the rabbit will sever them in seconds. If I'm away traveling, Hisae never touches the projector or the audio system -- the patching and cabling chores make it too much of a hassle (and let's not even talk about the whole other set of cables and converters you need to get a computer video signal into your projector).

I still haven't heard my Momus speakers in action. I've been twice to Konrad Electronics, once to buy (by the metre, cut with a knife from a drum) the raw speaker cable needed to connect them to an amplifier, once to see if they had some kind of converters which could connect half-inch jacks to speaker cable (they didn't, and recommended I tried an even more techy specialist shop in Prenzlauer Berg). I've also been into every junk shop in Neukolln, looking for a cheap secondhand amp from the "separates era". For some reason, old separates amps from the 70s and 80s are always very expensive: I haven't seen anything cheaper than €60, even in the crummiest junk stores. At the moment I'm planning to use an old Roland mixer as my amp, but I don't know how to connect it to the speakers. 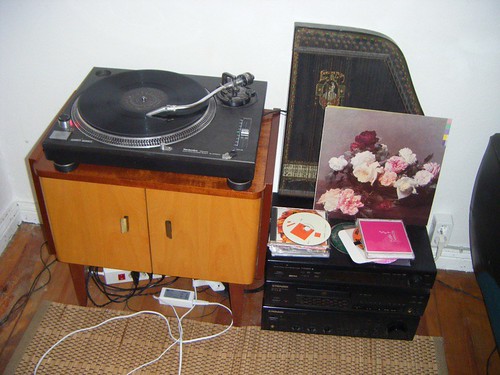 Buying an amp worthy of the €600-value Momus speakers would just be the beginning -- if I took the "separates route" I'd have to start building up yet another pile of audio junk in yet another corner of my room, demanding yet another power extension cable. Sound Sound recommend a NAD amp. I'd probably want a Technics turntable like the one Jan has (my East German deck can't connect with anything except its old speakers). I'd add a decent cassette deck and a CD player (at the moment I play CDs in my computer, but they whirr and whine and I hate having to insert and eject them). All this investment would basically be for a "legacy system" that played old museum media like vinyl -- to play, in other words, bad media well. And at the back of my mind, when I think about high fidelity and perfect sound, is the thought: what if my ears aren't up to it? They already buzz with low-level tinnitus. They've probably lost a lot of high-range sensitivity.

I often think, when I'm disentangling power cables from audio cables, that human systems are just needlessly clunky and stupidly designed. Didn't Buckminster Fuller have a riff about how the world could be saved by simple standardisation, starting, say, with a universal electric plug? And yet, in the years since Bucky's death, we've, if anything, multiplied the complexity of our systems. The Cold War and the Anglosphere's resistance to the metric system have only made things worse (in my room they're represented by my East German equipment frostily shunning my capitalist equipment, and by my Anglospheric quarter and half-inch jacks refusing to define themselves in millimetres and centimetres). There's also the problem of the increasing pace of format obsolescence: do I hang onto my vinyl, or replace it with CDs, only to replace those with mp3s? Do I throw out my analog equipment and replace it with digital? How do I play my VHS tapes, my video8s, my DV tapes, my DAT tapes, my reel-to-reels? Do I allow all these systems to co-exist alongside one another, eating up space and power, or do I allow the latest one to displace and represent them all, with the risk that it too may disappear in a couple of years?

If the banking system is anything like the tech systems in my living room, we're fucked.
Collapse