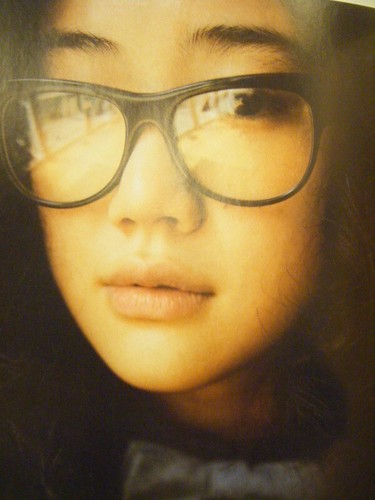 This image of Yu Aoi is by far the most popular of the thirty or so new images I've posted to my Flickr photostream in the last week. It's from a Beams Boy ad supplement stapled into the new edition of Ku:nel, my favourite Japanese Slow Life magazine. Yu Aoi features in about twenty photos in this supplement, and in many of them she's wearing these beautiful glasses and a preppy bow tie.

I've written about Yu Aoi before on Click Opera, enjoying (but at the same time doubting) her depiction as an artist: "If you follow Yu Aoi through Japanese popular culture, you find that, over and over again, she's cast as an advanced, soft being, a quirky, childlike, expressive, kind-hearted fairy, modestly unaware of her own beauty and unwilling to use it in power games. In her many TV commercials -- for Canon, for the Aeon bank card, for Shuiesha -- Yu is self-expressive yet socially harmonious. She's a water nymph, sharing a bath with Aoi Miyazaki. If she's not a painter, she's holding a light meter, part of the creative team on a photo shoot, dressing up in a kimono, heading out to the seaside in a cute yellow Fiat 500, or weeping as she reads sentimental books in refreshing candy-striped wrappers. Now, it's unlikely that so perfectly lovely a person could ever be a good artist. And, indeed, the paintings Yu's character creates in Honey and Clover are truly dreadful daubings, underscored on the soundtrack with appalling emo songs..."

The fantasy in the Beams Boy shoot is that Yu is an intellectual. It's not that she hasn't worn glasses in fashion shoots before -- she has, it's just that they've never been good ones:

I find Yu as an intellectual just as compelling as Yu as an art student in Honey and Clover. I imagine long evenings in her company, discussing the pioneering actions of the Gutai Bijutsu Kyokai between 1966 and 1972, and the avant garde group's belief that beauty arises when things become damaged or decayed. I can imagine Yu giving an enthusiastic exposition of this concept, completely oblivious to the fact that her face is completely refuting it as she speaks.

Someone who might confirm that Gutai belief, though, are Ku:nel's cover stars this month, two old Dutch ladies who dress up in remarkable traditional costumes for various civic festivities in their hometown. I must say, I think it's rather unjust that, although they're on my Flickr photostream right next to Yu, these amazing ladies only get 29 views to Yu's 109. Not only do they do their own hair and make-up (in most amazing styles), these ladies also embody the Gutai ideal. 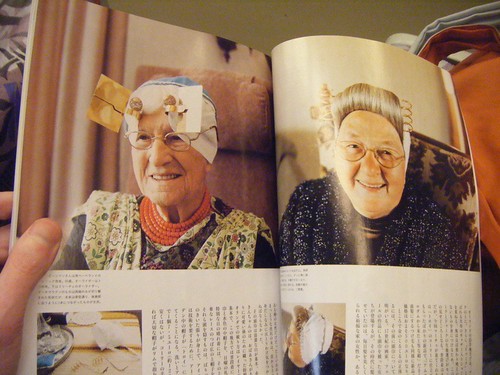 "This is described as the beauty of decay, but is it not perhaps that beauty which material assumes when it is freed from artificial make-up and reveals its original characteristics? The fact that the ruins receive us warmly and kindly after all, and that they attract us with their cracks and flaking surfaces, could this not really be a sign of the material taking revenge, having recaptured its original life?"

I think to agree too wholeheartedly to this "revenge of the material" would be to miss the point, though: the ladies on Ku:nel's cover are weatherworn, sure, but they're also investing a lot in make-up and self-transformation, and it's the tension between the two that makes them look really interesting. And although Yu Aoi is wearing little make-up in the Beams Boy shoot (we can see her beautiful moles, regrettably covered up in her Shiseido campaign), she's been carefully styled. It's the dynamic tension between her "original life" and the projection of an unlikely fantasy Yu that gives this image its power. I can see her now, sipping port as she sits in the button-back library chair, nodding sagely in her glasses, cradling a dusty book between her thighs.
Collapse