Well, here I am looking pleased as Punch to have received in the post yesterday not just one but two sets of finished CDs of my new album Joemus: the American and British CDs arrived in the same delivery. It's always a thrilling moment, but this time there's the suspicion that it might be the last physical CD I make, because no-one's buying the damned things any more. I still like the album format, though, as a structure. And you still need a physical object as a sort of alibi for that format -- a digital-only release is a bit nebulous and ghostly. Maybe that's what people will say in future; not "Are you releasing a new album?" but "Are you releasing a new alibi?"

The two releases are pretty much identical; all that distinguishes them is that the colour is darker on the UK one, which also has a sticker on the front bearing the title: Momus Joemus (release date mid-November, available on Amazon for pre-order now, UK edition and US edition). 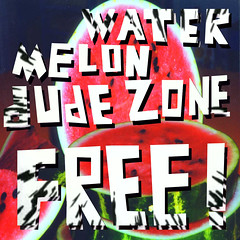 The Joe of the title, Joe Howe, is currently engaged in a LastFM spree / jamboree-type thingy, giving away lots of his "ultra short attention span punk electronic music" free. Here's his Watermelon Dude Zone album, for instance. More on his LastFM and MySpace pages. And check out his other project, Ben Butler and Mousepad. I think right now I find Ben Butler (which sort of sounds like 70s BBC sci-fi themes) even more intriguing that Germlin -- I wonder what a collaboration with Ben Butler rather than Germlin would have done to the Joemus album? (Answer: there's probably too much melody already packed into BB&MP to lend the material to easy co-option into Momus songs.)

Whenever a Google Alert tells me an emerging band is being compared to me, I make a point of listening to their music. The alerts usually concern Stars or Black Kids reviews, but this week I got directed to a pretty nice album by Konrad -- one Jeffrey Konrad, in fact, a native of Rock Island, Illinois (with a little help from friends playing circuit-bent turtles).

The album is called Loose Canyons, the review that likens it to me is here, and you can hear quite a few tracks from it on the Konrad website. Konrad himself doesn't namecheck Momus as an influence, by the way; he lists Eno, Devo, Apples in Stereo, Hot Chip, Mountain Goats and Dan Deacon. It also reminds me of a little-known band from earlier in this decade, The Busy Signals. Whatever ghosts are in it, the Konrad album has come out pretty well, I think.
Collapse