Being a bit of a fan of ambivalence -- that Janus-like state in which our reactions face in two directions at the same time, which means it has something in common with collaboration -- I rather enjoy nuanced reviews of my work. Outright pan or praise doesn't feel right, fair or accurate, somehow. All-good or all-bad is bound to be a lie.

So I enjoyed the mixed Joemus review in Brooklyn mag Prefix, which begins: "Nick Currie, who records as Momus, has spent much of his career treading some uncleansed middle ground between the irksome and the inspired". This review, which awards the record seven out of ten, leans to the "inspired" side but doesn't lose sight of failings, calling me on naff techniques and half-finished songs. 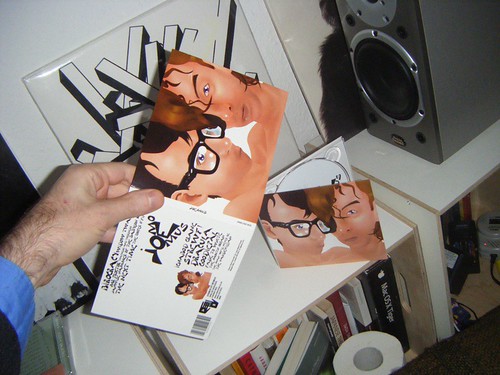 The review sees a natural pop singer with a "lopsided canon" thwarted by conceptual baggage and production tricks, but believes that "as soon as we’ve hit rock bottom we’re pulled up by our bootstraps". Almost every sentence has this ambivalent structure, as if to say "Although this record is pretty terrible, it's actually pretty good in the end". Of the work with Joe, for instance: "Occasionally the collaboration between these two disparate workers doesn’t gel... but it’s gratifying to hear how often they hit paydirt". Like The Vaudevillian in the final track, I'm "leaving the audience not knowing whether to applaud or call the emergency services".

Since many of you now have your copies of Joemus, I thought it might be time to issue a "how's my driving?" heads-up and a tollfree number. So how are you getting on with this album? Any juicy ambivalence to share? Tracks you skip, tracks you love, tracks on repeat? Are we talking curate's egg or Fabergé? Stinker or swimmer? Is Joemus the fourth worst of the twenty Momus albums, or the third best? A mixed bag or a nickelbag of funk? Jammus maximus or Janusbait? The lines are open.
Collapse