Next Wednesday the Nobel Peace Prize will be presented, in the town hall of Oslo, to the person deemed to have "conferred the greatest benefit on mankind" over the past twelve months. This year's winner has already been announced; Martti Ahtisaari, the ex-president of Finland, takes the medallion "for his important efforts, on several continents and over more than three decades, to resolve international conflicts". Ahtisaari will take home over a million euros for his work to resolve disputes in Kosovo, Iraq, Northern Ireland, Central Asia and the Horn of Africa. 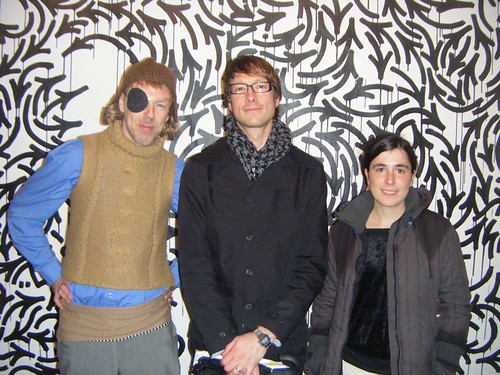 Alejandra Salinas and Aeron Bergman are two artists currently based in Oslo; he's American, she's Spanish. You might know Alejandra and Aeron for their Lucky Kitchen label or their fabulous soundscapes of environments in places like Portugal and Scotland, released on CD and used in their gallery installations. Well, so, Alejandra and Aeron have invited about twenty artists to contribute pieces for an online exhibition about peace, held at their alternative Nobel Prize website, a benign spoof on the official site.

The peace pieces are mostly films, though Goodiepal contributed a piece of jazz and a score and Emma Khil made a slideshow of the factory where the gongs are made in Kongsberg. My friend Xavier Gautier (he's Anne Laplantine's husband) combined images of Anne Frank with children's songs from 1950s Edinburgh. Alejandra and Aeron made a video of themselves whistling in the ornate but somewhat warlike environs of the Oslo town hall, where the prize will be presented. My contribution is Floating Film, a radical re-edit of the 1959 film by Ozu, Floating Weeds. Click the image above (or here) to see it.

Floating Weeds is one of my favourite films, the tale of a kabuki theatre which comes to visit a small seaside town, and the melodrama which unfolds between various actors as old scores are settled. Despite the tranquil setting it's actually a film seething with a lot of hatred and conflict, with confrontations between men and women, young and old, actors and townsfolk. What I've done is take all the human drama -- all the conflict -- out of the film, leaving just the shots that establish each scene, and adding some warm crackling sounds and a narrative from a documentary about the functionalist architecture of an Alvar Aalto sanatorium, the Paimio Sanatorium in Finland.

The removal of melodrama turns the film into a design documentary about a residence for sick people, which is soothing, but also raises the question of whether a certain amount of conflict isn't necessary to human existence, to make stories happen and people relate to one another. The utopianism of design features about unoccupied buildings can be somewhat spooky; the chilly air of the rational Scandinavian forests may be good for our recovery, but when we're fit again we'll probably get back into the fray, swinging for what we believe in. All it takes is Jacques Tati -- or a family squabble -- to turn a chilly documentary back into a warm human melodrama.

It's not that Floating Film isn't a pacifist statement, just that that statement is qualified; a world without any conflict would have to be a world without people, and without stories. Just like Scandinavia, though, it would probably have great design.
Collapse