I don't often use my DV camera these days, but I dusted it off the other day to record a self-interview for a documentary Jim Burns is making about the BMX Bandits. While the antique device was plugged in, I grabbed some sequences from a random tape in my DV library; scenes from one of my two 1998 trips to Japan. I've put these up on YouTube. Ten years is an interesting interval.

Kahimi Karie at 3D Corporation being interviewed (with me) for Rockin' On magazine. A taxi to the office of H magazine in the Infoss Tower, Shibuya. Nudy Milky Wax. The Nippon Columbia Building, giving interviews about The Little Red Songbook. A typical Tokyo map. Restaurants. Kimono patterns in Aoyama. The Floracion Hotel, Aoyama. A DJ event featuring Silicom. A Hippopotamomus watch. Time remaining: one million hours. Engrish: "Please enjoy your rich time". Jacking a Palm Pilot into an ISDN / Analog data line in a public phone box. With then-girlfriend Riho in an Aoyama shop dedicated to Chinese movies and posters. Hinano Yoshikawa advertising GPS units. People with Nintendo Gameboys on the train. Super Loose socks. Visit to Riho's friends' house in the suburbs. Buying beer in a supermarket. A family shrine containing "Buddhist Koran". Alice in Wonderland clock and Egon Schiele reproduction. Takashi Homma-style suburbia. Faye Wong record sleeves. Home cooking, Fatboy Slim records, then traditional Japanese music concert on TV. Street cooking served from the back of a van. Tsutaya video store. An eki-ben -- boxed train food -- on the shinkansen. Passengers on the platform, men in red boiler suits at work underneath it. Arrive in Gunma prefecture. GPS on the car dash. Baroque supasento by the roadside. Enormous indoor golf building. Mount Haruna-San. A gallery of trompe l'oeuil.

At the Ikaho-jinja Shrine with Riho. The steps of Ishidan-gai, the main drag of the Ikaho-onsen. "A hot springs resort is a place for lovers and also dirty people who have affairs with geishas," Riho tells me. Ultraman statue. Somebody trying to balance a ball on a red umbrella. Hotel Endless. Riho's family and "scary cat". Riho's father reading my father's book about fishing, The River Within. Eating gyoza at 3D Corporation, Kahimi Karie's management company. Watching a live video of Kahimi Karie's show in front of 2000 people earlier that year. Toog and I were in her backing band. Kahimi Karie and Momus interviews from the concert video. Kahimi talks about her fear of singing live, I say she's "three times more confident now" than when she used three mics. A Cornelius concert at Ebisu Gardens Place. Fake German beerhall and French palace. A glimpse of Jun de Nelorie from The Nelories in a pink jacket. Cornelius merchandise and 3D glasses. Support band Seagull Screaming Kiss Her wearing X-Girl dresses. Fantastic World Tour graphics and theremin solos. Cornelius arrives onstage. "Ape shall never kill ape". Shots of Keigo Oyama, Horie on guitar, Yuko Araki on drums. Maestro beatbox and theremin solo: Beethoven's Ode To Joy.

The first thing I did after watching the second of these videos was check out Yuko Araki's MySpace page. She's making quite interesting music these days, sparse and quirky songs with a Buffalo Daughter or Cibo Matto feel, under the name mi-gu. In other words, she carries "1990s DNA", but I think she's taken it somewhere quite fresh. The track Floating even features the Maestro drum box which you can hear in the Cornelius live show, and which was such a big part of my sound in 1998 too (via samples). It's even possible that the mi-gu songs were recorded in the studio in the 3-D building, and that this is the sound of that same Cornelius Maestro beatbox we all used (and sampled) back in the day. Family! 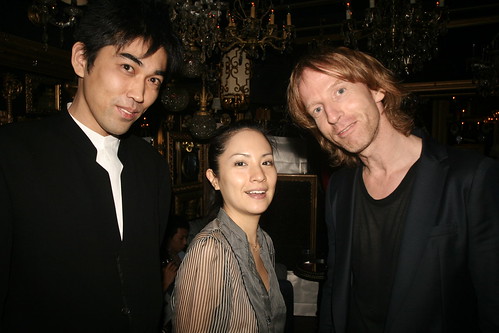 So what else has changed, a decade later? Kahimi Karie has renounced her mainstream audience (there's no way she'd fill a 2000 capacity hall these days) but continues to make music. Like many of the Shibuya-kei people, she also blogs about eco- and post-materialist themes for MYLOHAS (quite a similar career path to mine, in other words, though of course she's much prettier). She was spotted recently at Narziß, the Tokyo party "for exquisite and arrogant dandiacals", which just called it a day after 21 parties. She's seen in the photo here with photographer Zoren Gold, who shot some of her sleeves.

H magazine is still published from the Infoss Tower (which opened in 1998, the year I visited it), but has cut down from eight issues a year to just four. To my mind it hasn't transitioned well to this decade -- editorially, this magazine founded in 1994 is still very much stuck in the 90s. The Infoss Tower has been in the news a lot recently because porn actress Ai Iijima died there in (possibly) suspicious circumstances just before Christmas. Silicom's Aoki Takamasa (seen DJing in the video) has since relocated to Berlin, where he's living in Ryuichi Sakamoto's apartment, recording a new album for Sakamoto's label Commmons. His new work still has the sharp-edged, tightly-controlled sound of Silicom, but he's singing over it.

People don't use Palm Pilots any more, and certainly don't jack them into analogue phone lines in public phone boxes. Nintendo Gameboys are no longer seen in massed ranks on the trains, replaced by surfing keitais. I don't see too many GPS units in cars here in Europe, even ten years later.

Super-loose socks are out. Faye Wong faded. That Chinese films store in Aoyama is no longer there, and the vogue for Chinese films doesn't really exist in the same way it did in 1998. Model Hinano Yoshikawa disappeared totally for a few years, then came back (as did Hiromix). Fatboy Slim slimmed way down, then made a slight return as The Brighton Port Authority. Cornelius has a much lower profile now than he did ten years ago. Japanese consumer culture in general (see these charts for magazine sales figures, for instance) has taken a big recessionary hit. Some say Japan has entered a new period of cultural isolation. Kimono shops, baroque sentos and golf ranges, however, still do well. My ex Riho now works as a photo researcher in Tokyo.
Collapse