Now here's a funny thing. Ed Templeton, the Californian skateboarder and artist, was recently in Berlin with his wife Deanna. He happened to drop by the opening for Nippon Edit at Motto Berlin -- an exhibition of Japanese publications from Utrecht, Foil, Cosmic Wonder, Art Beat -- and ran a photo on his blog. In Ed's photo you can clearly see an eyepatched pirate engaging surreptitiously in the activity known as "digital shoplifting", branded by the Japanese Magazine Publishers Association as "information theft". Instead of buying the materials on display, this brigand is videoing all the names he can find, in order to google it all when he gets home.

"I can base at least 38 Click Opera posts on this material," I joked to my friend Jan, who -- like Ed -- caught me fur-hatted and red-handed in my deed (as, indeed, did Motto staff; I'm the figure in blue snapped by Akiko, the exhibition organiser). But instead of 38 posts, I thought I'd just give you my source material all at one go and let you google it yourself. I've set my shoplifted video footage of Motto's gorgeous Japanese publications to the song The Cooper o' Fife from the Joemus album:

To get you started, here are some googles this material led me to. Comic book artist Erika Kobayashi has a "starblog" at Ecocolo magazine. She's recently been in Berlin. There are some nice new Yurie Nagashima photos at Krash Japan, in their special photography issue.

Akinori Oishi (author of the comic My Life With Rice) exhibited at the recent Pictopia character designfest in Berlin. It's well worth checking his tiny Microfilms or playing his charming Opniyama game, originally developed for the 2002 opening of the Palais de Tokyo. 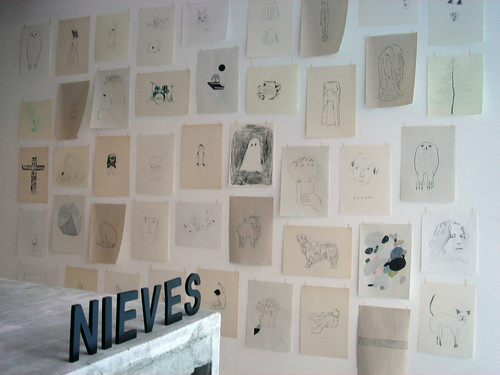 Digital shoplifting is the post-materialist way to shop; you just browse, take notes, then go home and google. You might say "Sure, Nick, but if everyone did that instead of buying stuff, these publications wouldn't exist in the first place." That may be so, but the nice thing about, say, Nieves Books is how cheap they are to produce. They're folded, stapled A4 booklets. The Nieves Books Flickr photostream reveals that the Zurich zineshop recently had a show featuring Utrecht Books (who now boast a reading room in Aoyama as well as their apartment shop in Nakameguro).

Here, from Utrecht's YouTube page, is a demonstration of the flipbook by Masashi Kawamura, Rainbow in your Hand:

The sad fact is that if I hadn't digitally-shoplifted all this material via video, I would probably have written everything down on my iPod Touch and still gone home and googled it. Incorrigibly-digital piratekind is truly irredeemable, n'est ce pas?
Collapse