We fake the past every day. Across the street from my house they've been refurbishing a corner site, turning it into a restaurant. I think it's going to be a pizza place. I've watched as the walls were stripped down to the brickwork and completely covered in fresh plaster. Last week, as a finishing touch, a few patches of trompe l'oeil plastic brickwork were added here and there, presumably to give the place a warmer, more rustic, less clinical feel.

Someone who faked the past rather more ambitiously was Norman Daly, a Cornell Fine Art professor whose biggest project was faking an entire civilisation, the Civilization of Lluros. Daly died a year ago, aged 96, but left behind him a trail of relics suggesting a parallel world culture. He also, arguably, founded the burgeoning genre of Archeological Art. Beside William Benson's portrait of Daly below you can see an example of the genre by Nina Beier and Marie Lund, a piece from 2007 called Common Objects. I have it on my wall, in fact. I like the way the objects summon up an imaginary culture, and suggest uses, etiquettes, rituals which don't exist, and never did.

Norman Daly preferred to call the genre he founded "archeological fiction". Born in 1911, Daly did the "painting in Paris" thing in the late 30s, but didn't really find his direction until the 1960s, when he started making sculptural assemblages, covering them with fake patina (as many souvenir vendors still do today) and showing the pieces in museum-like vitrines. In 1972 he put on a show of Llhurocian artefacts at the Andrew Dickson White Museum of Art at Cornell University. The show toured the US and Germany, and updates (containing new "archeological finds" from fictional places like Vanibo, Houndee and Draikum) appeared over the following decades. In 1991 came "The Civilization of Llhuros": The First Multimedia Exhibition in the Genre of Archaeological Fiction, the kind of thing you might expect to see in LA's peculiar Museum of Jurassic Technology.

Daly expressed himself in lots of ways through Llhuros. It became a parallel world job -- he appointed himself Director of The Institute of Llhurocian Studies at Cornell University (where he moonlighted as an Art prof), and worked closely with the (non-existent) Llhurocian Embassy. He composed Llhurocian music, played back Llhurocian field recordings and made up (shades of my 2000 Folktronia exhibition here, and also The Book of Scotlands) myths and legends for his civilisation. Llhurocians, he said, were obsessed with sex, but sought forgiveness for their sins by walking up a tortuous path to a mountaintop on stilts, balancing large birds on their heads. 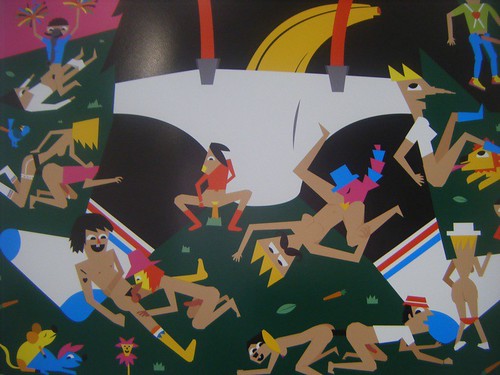 Daly made his artefacts from styrofoam and trash and stored them in a barn in Mecklenburg, in upstate New York. A curvy-hipped detergent bottle could become, under his hands, an earthenware "trallib, or oil container from the late archaic period." He made "a bronze trallib, phallic type, used by priests at the Temple of Phallos at Draikum" from a juice squeezer. Bits of a dismantled iron were transformed into "a temple votive containing an imprisoned image of a minor deity."

A bit of a Swiftian "unreliable narrator", Daly said his work "parodies the analytical methods of anthropologists, sociologists, psychologists and art historians" and "presents work patinated to suggest antiquity and emphasizes deception, obscurities and satire, strategies aimed at stimulating audience involvement." The goal was "to heighten ambiguity and dubiety by alternately strengthening and weakening the credibility of the invented civilization."

The Civilization of Llhuros website is a simple, single page with this text: "The true origins of the obscure culture called Llhuros are unknown. Until the anthropological historians have disentangled legend from fact and meshed their philosophical interpretations with the comparative study of scientifically certified data into an incontrovertible synthesis, it will remain so. Our ever-increasing exploration and knowledge will, we hope, one day produce a clearly delineated and sharply focused picture... COMING FALL 2008".

That clear picture never came; the Llhurocian civilisation fell -- along with its creator -- in April 2008. The Islands and Ghettos exhibition -- which is where I stumbled on a few tantalising Llhurocian fragments the other day -- continues at Kunstraum Kreuzberg until April 26th.
Collapse