As I revealed the other day in my piece about being sartorially unimpressed by anyone in New York except the Indian community, I can be pretty ho-hum about people's visual style. But when I like someone's style, I really like it. I glom on. I copy. I evangelize. I've always done this; at school I'd copy someone's handwriting if I thought it was cool, or wear my tie the way they did. These days, my role models in this respect tend to be Japanese women, which makes it a bit harder to copy. But I can still evangelize.

One of the few Flickr streams I visit every week is Hibisanpo (it's the Japanese for "a daily walk") and it's by Hikaru Furuhashi -- someone whose eye, whose visual style, is, for me, very inspiring. I first met Hikaru in 2003 when she was an art student at SFAI, and hung out with a bunch of San Franciscans called Seahorse Liberation Army. She now lives in New York, where she's engaged to media artist Jeff Hoefs and works as a graphic designer. It's been a pleasure to meet with her this week and catch up with her news, though I knew most of what she's been up to via her Flickr stream. 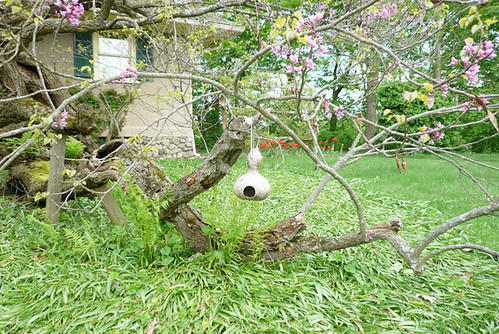 When Hikaru showed up at the gallery with Jeff on Friday she was carrying one of her WonderWonder hand-printed tote bags. She told me she's only sold two on her Etsy page, which seems a shame. In a world where everyone thought like me, Hikaru would be bigger than Prada!

What defines her style? I suppose words like "wholesome" and "cute" and "ethnic" and "natural" spring to mind. Hikaru loves folksy red tablecloths, healthy food, cats, educational facilities, plants, bright colours, graphic patterns. I suppose you could say her sensibility overlaps with that of Ku:nel magazine -- a Slow Life aesthetic aimed at middle class Japanese women in their 30s. And me, apparently.

Hikaru's blog WonderWonder expands the field of interest to the ethnic dress sense of the Hmong people of Southeast Asia (and references my own particular fashion bible, Tibor Kalman's (un)Fashion) and Bridget Riley op art patterning. I suppose there's a nexus here of hippy style, the style of 1990s / 2000s Japanese design students, and a kind of wholesome 1950s Americana (like the bits of David Lynch that don't concern "Bob").

I bumped into Hikaru again yesterday evening at the Ronnybrook Farms Dairy in Chelsea Market (great ice cream). She was with her friend Tomoe, an architect (wearing an interesting pair of green tabi shoes), heading out to see Meatpacking Design 09 -- extensively covered on Hibisanpo, and something I'll try and check out myself this afternoon.

Where I just blogged about a vague intention to visit Jackson Heights the other day, Hikaru actually took a trip out there (it's not far from her Greenpoint home) and snapped Tibetan Cafes and geometric saris.

One thing I find extraordinary about Hikaru is the way she manages to extract aesthetic gold -- material infused with a Japanese (and, I can't help thinking, somewhat "Shinto") aesthetic -- from unpromising American source material. She takes the bland "convenience landscape" of the US and turns it, by sleight of editorial hand, force of will, and sheer niceness, into something gentle, kind, lyrical and interesting. She does this (unlike me) without making any overt critique of America, just by cropping what's in front of her, seeking things of value, and making stuff. She transforms America not with words, but with her eye and hands. Wonder indeed.
Collapse