"Man, proud man, dress'd in a little brief authority," Shakespeare said (before America even existed) "like an angry ape plays such fantastic tricks before high heaven as makes the angels weep." 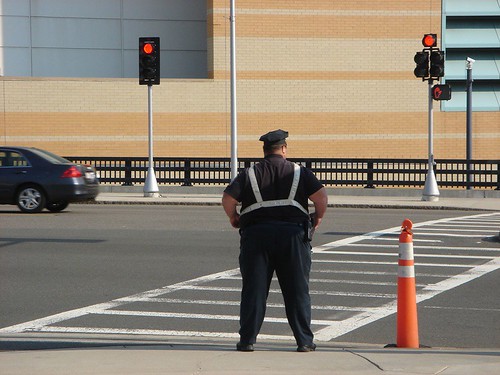 Something happens to an American -- a person, reputedly, given to maverick ways and deeply opposed to government, bureaucracy and regulation -- when he dons a uniform. Dressed thus in a little brief authority, the American becomes stentorian: a loud-voiced, angry ape able to speak -- or so it seems -- only in imperatives. Here are a few encounters I've had with the species over the past week or two.

I'm at the L train station at 8th Avenue. A small Asian man is scurrying across the tiled hall. Two burly cops stand by the wall, seeming, by their silhouettes, to bristle with weapons. One shouts "STOP RUNNING!", but the scurrying Asian man doesn't hear. For a second I worry that he will be shot for disobedience.

My bus on 5th Avenue has pulled a couple of feet away from the stop, but is stationary in traffic. I run up and knock gingerly on the door. The driver makes to ignore me but -- since the light is long -- eventually opens. "Next time," he scowls, "be at the stop!" I apologise and thank him profusely, despite thinking that his tone is a little off.

In this land where we might, any of us, be packing heat as a constitutional right, shouldn't this kind of encounter be a little more polite? Sure, this man is on a short fuse and has been having a bad day. But what if I am on a short fuse and have been having a bad day myself? Might his rude tone and presumptuous imperative voice be the straw that breaks the dog's back?

Explaining once why he left California and settled in Rome, Morrissey made a remark about the "fascist policemen with keys dangling from their belts" you encounter in America. And if you walk down an American street with your eyes and ears open, one thing you're sure to hear will be sirens, and one thing you're sure to see will be signs with imperatives on them. Not just the imperatives of advertising ("Learn English! Go to night school!") but the imperatives of bylaws and regulations: "No honking! Penalty $300."

Sometimes you'll see a sign with an endless list of things that are forbidden: ball games, stereos, food, bicycles, smoking, spitting, dancing, photography, loitering, skateboarding, dogs, alcohol. Oh, always alcohol! Yesterday I was at a design festival in the Meatpacking District, and there was a nice little cafe where they were handing out free vodka and beer. One foolish Scandinavian visitor made the mistake of approaching the line dividing the cafe from the sidewalk and instantly the staff pounced: "This is America, you can't take alcohol onto the street!"

Then there are the looming hulks at the door of every building, whether it's a shop or an apartment block; private security staff. In the stores they say "How you doing today?" in a tone which suggests a quo vadis, a centurion's challenge. At the apartment block door it's more definitive: if you don't pass the ID test, you can't enter. I'm listed as a guest in the Upper East Side tower where I'm staying, but there have been about eight different doormen in the time I've been staying here, and I have to establish my identity (locate my name on the registered guest list) with each one of them.

People in uniform in the other societies I know don't loom and bark this way. Japanese and German policemen are ineffectual, mild creatures. The Japanese ones sit in kobans eating noodles, or wobble around on bicycles. They're always willing to help you find your way to a nearby shop or museum. The German ones sit in cars looking bored. Occasionally you'll see them en masse confronting a squat house, but mostly the German preoccupation with not appearing Nazi or STASI-like stops them from appearing in any way fascist. That's all behind us now -- the tyranny of uniformed authority, and that arrogant, barking tone it presumes to adopt towards citizens.

My theory is that authority in America (the main topic of the American TV I grew up with, which seemed endlessly preoccupied with charismatic policemen) isn't the opposite of the maverick strain in the national character, but the result of it. People in Germany or Japan have, by and large, internalised consideration for their fellow citizens because they're more collective-minded, more socially-oriented. Americans, by and large, haven't. Hence the curbside signs ordering you not to do things, and reminding you of the exact dollar price of doing them. It's the imposition on wayward individuals of consideration by force, in a society that hasn't ever quite accepted that it is one.
Collapse