* A day walking around Athens -- Plaka, the Acropolis, Kolonaki Square and the floral slopes of Likabetos, dinner in Keiramikos -- taking out-of-focus snaps with my cheap Camson camera. I'm torn between rage that a whole tranche of memories will be blurred, and fascination with the highly original effects the Camson produces. 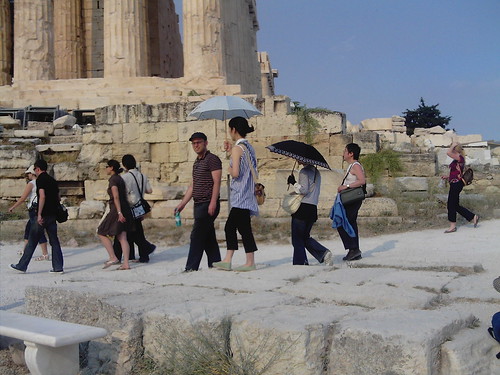 * At the Parthenon Hisae and I play "Chinese or Japanese?" It's getting more difficult; as Hisae points out, chains like Uniqlo are now pan-Asian, and economically there's also convergence between the two nations (they're neck-and-neck). But differences remain; I become fascinated by a young tour guide in a blue and white pinstriped shirt, United Bamboo style. This handsome woman in her late 20s is dressed as the kind of Edwardian English boy who might have played with a hoop-and-stick, ipso facto she can only be Japanese.

* Babis tries to convince me of the virtues of Cormac McCarthy. I read chunks of one of his novels, The Road, and admit that it's (inverted commas) good writing. But something annoys me about it. It's "emotionally correct". There's a man in it who acts as men should, and a child who acts as children should. Profound emotion is milked from their relationship, in words that are well-chosen. A critic on the jacket calls for the Nobel Prize for McCarthy, but I tell Babis the Nobel goes to much more subversive writers, people like Elfriede Jelinek, who constantly surprise and outrage and subvert.

* I'm much more interested in remembering the communist writer Aldo De Jaco. Aldo was married to Babis' mother until his death in 2003. He loomed over my holidays with Babis in Rome in the early eighties, a "reticent statue". Aldo and B's mother, both communists, met in prison in Athens during the military regime of the colonels. They lived together in Rome. Aldo wrote novels, accounts of his trips to Moscow, books about his beloved Sicily, and a constant flow of journalism for left wing Italian newspapers and magazines. Although he didn't speak much to me, he impressed me deeply. Not just intellectually -- as a member of a venerable generation of "committed" European intellectuals -- but physically. He was like a bust of Karl Marx brought to life in flesh. If I get a chance, I might interview Babis' mother -- she lives in Athens now -- about Aldo. Long mp3s are something my Camson handles with panache.

* For some reason Greece and Italy always put me in a literary frame of mind. I'm getting ideas for a second novel. It will be called Balbus, or The Book of Fuck, and concern a purely instinctual man-mountain, part-Baal, part Mr Hyde, trying to exist in a graph-paper, airport security sort of world. Late Freudian stuff about the incompatibility of instinct and civilisation, then, but -- oh hell! -- I've jinxed it now.
Collapse