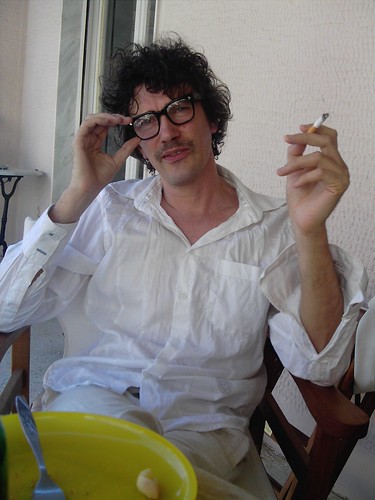 I first met Steve Harvey last year in Luxembourg, where we were both performing at MUDAM, at a conference about appropriation in art. Steve had recreated the final Ziggy Stardust concert as an artwork for Iain Forsyth and Jane Pollard, and in Luxembourg he did a performance in which he "learned" Bowie's Brel cover My Death onstage, rewinding the tape over and over until he had the exact inflexions of Bowie's voice, the exact chords and rhythms of the 12-string guitar part.

Steve -- who's a painter specialising in sci-fi-like scenarios -- lives in Athens with his Greek girlfriend Vasiliki, who's an actress. Yesterday Hisae and I spent several hours in their company. It's one of the things I like most, just to visit people in their apartment, find out how they live and how much they pay and what they do. I'm a "life inspector", but you don't have to tidy up when I come round! 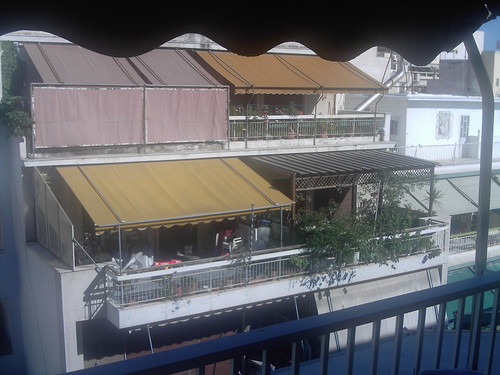 I can report that Steve and Vasiliki are living very well. Their Kypseli apartment is high on the slopes of Turkuvounou, the low mountain I lived on the other side of, growing up in Paleo Psychiko as a child. (When evening began to descend we took the obligatory hike over the mountain and I showed everyone my old house.)

Steve and Vasiliki pay €520 for a space that's about 70 square metres -- two bedrooms, a kitchen, bathroom and living room, plus big balconies on either side. It's up on the top floor and near the peak of a steeply-sloping street, so by the time you get out onto the back balcony the view out over Athens is pretty impressive -- a glittering white sprawl hemmed in by mountains. In this city almost as charismatic as Kyoto, the rents are almost as cheap as Berlin's. 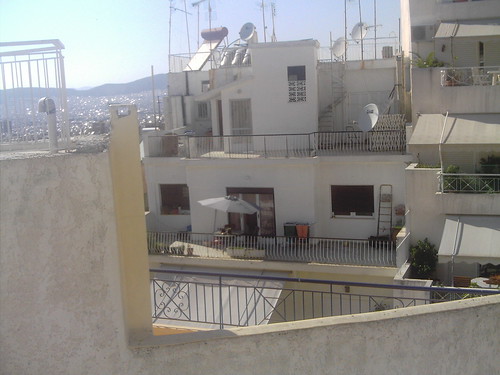 Vasiliki had some interesting tales to tell of her work with the avant garde theatre companies M-Kultra and F2 Performance Unit. In one, the audience had been taken from location to location, and Vasiliki, barefooted and mini-skirted in an alley outside the Bios theatre, had met individual audience members and allowed them to think they were determining a random route through the city by casting dice. The walk ended in a shady Kerameikos car park, where the punters were spirited off to the next location, the next interaction, in a three-wheeled motorbike.

This approach to theatre reminded me of the work of Japanese avant garde director Shuji Terayama. Here's a clip documenting his piece Knock, from 1975:

The audience for Knock picked up a map at the west exit of Shinjuku station. On it were marked locations for eighteen performances happening simultaneously across Tokyo during a thirty-hour period in places like public bathhouses, balloons, dark boxes, astronomical observatories. The performance was finally ended by the police -- you can hear them asking peevish questions at the end of the clip.
Collapse