I was pleasantly surprised by the crisp, modern clarity of the first Athens Biennial, staged in (and focused geographically by) a converted gas works in Kerameikos. With panache, the 2007 edition (titled Destroy Athens) avoided any of the bungling and bad curation you might expect from a nation not quite on the contemporary art map. The 2009 version -- titled, ironically, Heaven -- is a bit different. 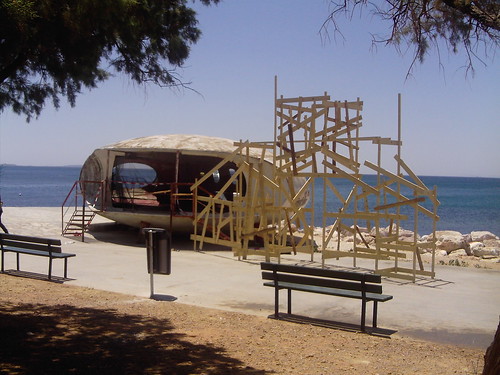 We'd already heard that things were chaotic. Over the weekend, two preview days were arranged for the press and the international art set. You could only get in, officially, if you were invited or an accredited press person. But one friend who was planning to review the biennial for a British monthly art mag hadn't managed to get her accreditation confirmed, and scrapped her review in frustration.

Hisae and I opted to see the biennial on Monday, as normal punters (openings aren't a good time to see art). It proved very, very difficult even to find. This year it's spread out along the beach at Flisvos, though you wouldn't know this from the terrible biennial website, which lists an administrative address in central Athens. Only if you know to click the blue heaven button (it looks like an advert) do you reach a part of the website with a link to actual visitor advice -- though still no actual address for the venue, Google Maps link, or, in fact, a map of any kind. 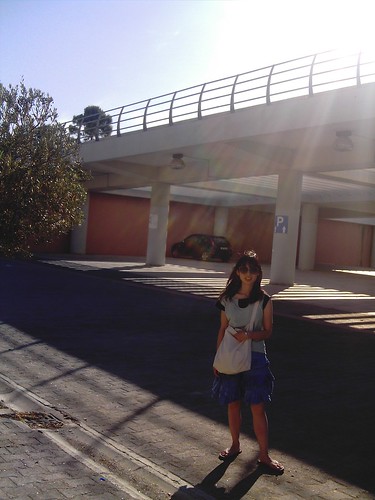 Getting to Flisvos involved taking a subway then a tram, and Hisae and I spent a frustrating couple of hours in which all we could find of the biennial were small blue labels promising, here and there, a performance on a day we weren't going to be there. Staff at venues supposedly holding biennial events -- the Flisvos Marina, the Village Cinema -- knew nothing about it. "The biennial is happening all over Athens," one security guard told us, after making a phonecall (in fact, there were events in the marina he was guarding). Even the biennial's own car park attendants -- presiding over vast, car-less lots -- didn't know where the event's component parts were. The main biennial venue turned out to be a disused motorway flyover bridge near the Delta Falirou tramstop. Who knew? (That's the venue behind Hisae in the picture.)

When we eventually located "heaven" we had it -- on its first day, which should have been super-busy -- to ourselves. We were outnumbered by the staff, and wandered through the halls (which, because of the shape of the flyover, got lower and lower as you got further in) alone. Sound spilled from one video installation to the next -- which often happens at biennials. What doesn't happen so much is an electricity problem which knocks out 40% of all video projections. Signs begged us not to use cellular and wifi devices because "they interfere with the video". 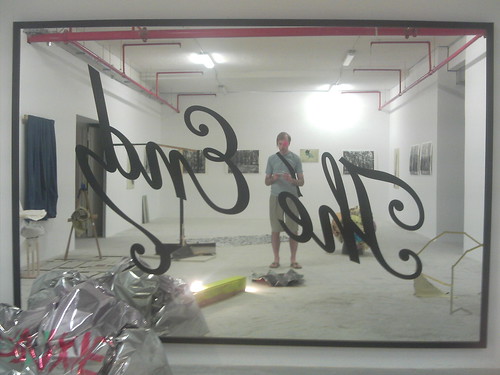 There was some good-ish art and some shockingly bad art all mixed up, but it was hard to get past the utter organisational failure of the Second Athens Biennial. Even the brand-new bicycles hidden round the back (the staff seemed astonished we even knew about them -- we discovered them by accident) turned out to be mostly defective, so as well as signing a long claims waiver document (in Greek only, but laboriously translated by the staff, clause by clause) there had to be extensive car park testing to find a bike that actually worked. Ours had saddles that slipped around and cables that tangled with the spokes.

Revisiting the biennial venues with bikes didn't help much. Heaven staff had told us, for instance, that a film by Malcolm McLaren was screening every thirty minutes at the Village Cinema's Gold Cafe. This came as news to the waitress there, who consulted with her manager and told us that the film would only be shown after 10pm. Further down the coast, the Live Events pavilion boasted a screening of Kantor's seminal avant garde play The Dead Class. Only trouble was, the monitor was off, and nobody was around to switch it on. 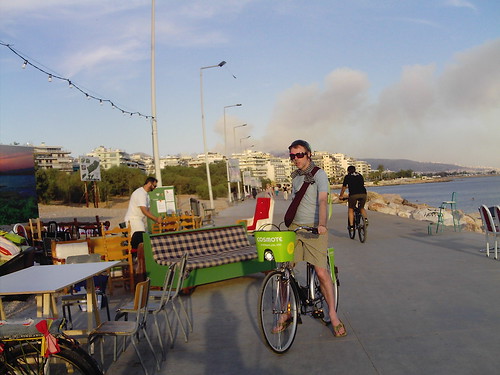 In the end, the biennial was upstaged by the violent traffic roaring down the coast, by elderly bathers wallowing in the sea, by the almighty sun, and by a dramatic bush fire on a nearby mountainside, which required small seaplanes to dive-bomb it with water. If this aerial operation had been mounted as lackadaisically as Heaven was, Athens would probably now lie in cinders. I'm told the fires themselves are organised, a scam builders use to raze legally-protected scrubland.
Collapse