ReMap2 -- supposedly a secondary and parallel event -- is everything the official Athens art biennial isn't. Whereas the official biennial (whose frustrations I listed yesterday) battles indifference and motor traffic down at the beach, ReMap2 is positively buzzing with curious people, and is sited in the charismatically crumbly inner city district of Kerameikos / Metaxurgeio. 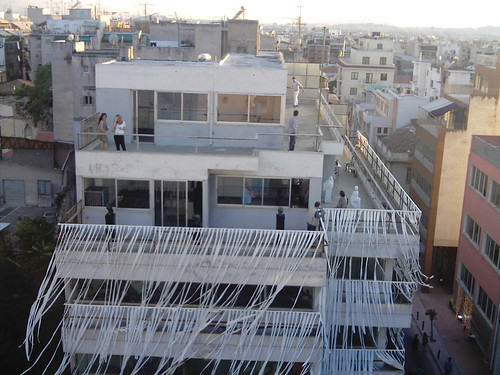 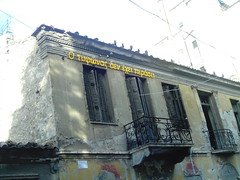 Kerameikos / Metaxurgeio (often abbreviated to KM) means ceramics and silk, and the district, just to the north of Plaka and the Agora, traditionally housed those professions -- as well as a bunch of undertakers. It has a tight streetplan 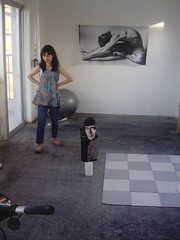 which restricts traffic damage, big immigrant communities (Chinese and North Africans, many of them illegal and paperless), lots of weird post-acid bouzouki ballrooms (trad music has a new lease of life here amongst the young), and a ton of industrial infrastructure, like the gasworks where the first Athens biennial took place in 2007.

Even if the art weren't good in ReMap2 -- and it's mostly excellent -- the tour of KM that you take to see it, map in hand, would be worth the visit alone. I don't think there's a more charismatic area in any city I know. Imagine the Lower East Side in the 1980s, with crumbling old Greek buildings instead of tenements. Imagine 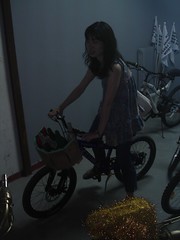 bits of Tokyo -- Daikanyama, say, but much poorer -- and bits of Hong Kong. Imagine the evocative patina of Berlin. KM has all of that.

Just as in the official biennial, you can borrow bikes at ReMap to see the district. But here the bikes are much funkier, artist-modified machines sprayed gold, tiny stunt bikes and big mountain bikes. Here it's done with panache. Everywhere you go there seem to be empty buildings, and they seem to have lain empty since the 2007 ReMap event, despite rumours of gentrification in the area. 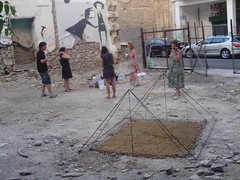 In fact, some things have got worse in KM since 2007. Plots of wasteground hosting artworks also have used condoms and syringes lying on the ground. There's a lot of prostitution and drug addiction here, and recently there's been a spate of drug-related stabbings and shootings in the area too. And yet, at 11pm, on the pavement 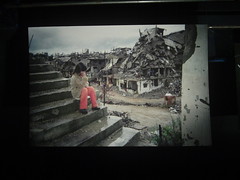 outside The Friends restaurant (officially a bar, the excellent, cheap food isn't listed on any menu, and gets whispered to you when you arrive), you feel like you're in Athens' best-kept, most charismatic secret. It feels like a village in the Greek islands, with its crumbly white-painted walls and shuttered windows.

The only place more bombed-out looking than KM is the Palestinian refugee camps of Lebanon. We learn this from an exhibition of photos taken by 500 Palestinian children with cameras given them in a project called Lahza -- the arabic word for "glimpse". Elsewhere, we encounter old friends: Michael Portnoy's gambling pieces, David Woodard's Wishing Machine (I entered the wish "David, wish you were here!"), and a wonderful hammock by Bless. 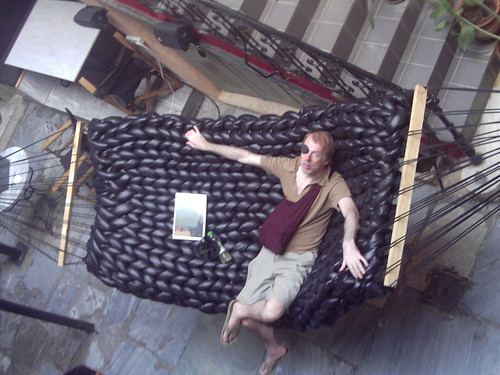 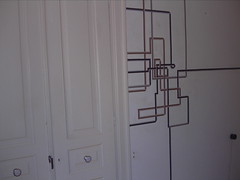 We'll be back in KM today to sample more of the (free) delights of ReMap 2. Thank God -- well, the gods -- it's on, and here, just a short walk from where Hisae and I are staying. Today we'll borrow funky bikes and see the bits we missed, and visit the nearby Puzzle Festival. Tomorrow we might trek out to the Deste Foundation, on the recommendation of Javier Peres. Deste is the creation of billionaire collector Dakis Joannou -- a big fan of Jeff Koons, apparently. It's housed in the suburb of Nea Ionia, fifteen kilometers outside Athens.