On arriving in Athens, I began to speculate about the ancient Greek religion. Little did I know that I'd become an initiate, before the week was out, in a new religion that partakes in some of its mysteries. 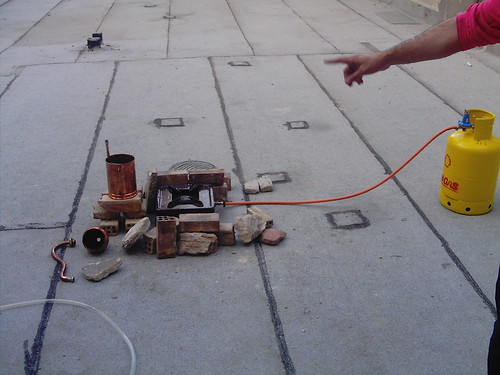 It all began on Tuesday, when Hisae and I entered a crumbly old house in Kerameikos and found a group of people assembled in a courtyard at the back, distilling. A priest-like man began to explain to me that they were making a sacred sort of vodka flavoured with a stone obtained from the Acropolis. A Greek friend later told me that taking stones from the Acropolis is punishable by a prison sentence, but I am informed the priestlike man intends to return the stone after the vodka has been made. 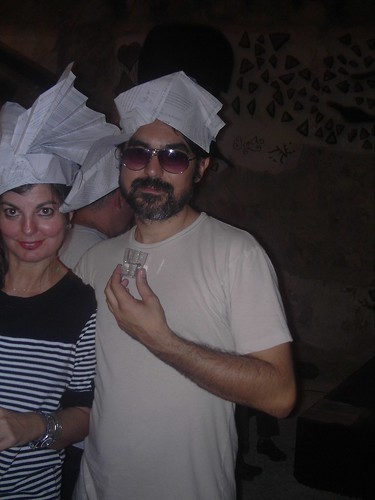 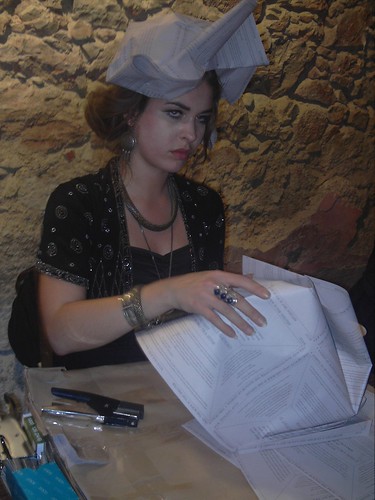 For some reason the man (seen above, disguised by sunglasses) began to speak of an oracle, a ghost, a double seen in a mirror. He said that he was the keeper of a gallery on Stanton Street in the Lower East Side of New York, and that he had access to an oracle. He advised me to come back and drink the vodka when it was ready. 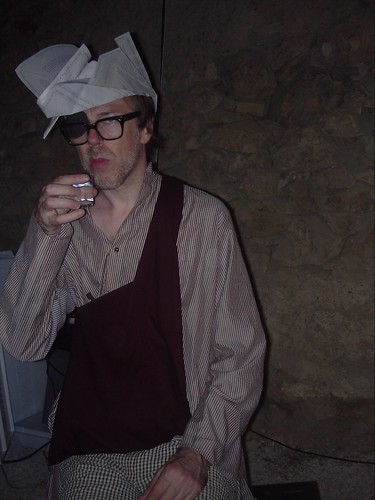 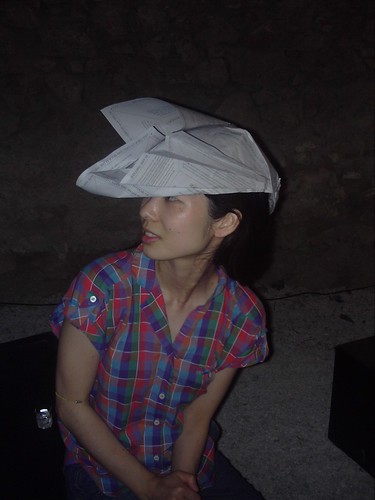 The following day we met this man by chance near the Agora. Despite living in New York, he seems to be from the Mediterranean. His gallery is called Fruit and Flower Deli, and its mysterious cult is described here. According to sacred documents he is actually called Rodrigo Mallea Lira, and he is the Keeper of the Oracle. The Oracle is a painting by the Swedish artist Ylva Ogland, wife of The Keeper. The painting -- which we saw -- represents a mysterious oracular mirror brought by her family when they came to Sweden from Britain. This mirror apparently makes prouncements about the state of the gallery, and of the world. (Is it true, by the way, that the Delphic Oracle obtained her visions by inhaling ethylene fumes from a poisonous stream that flowed through her temple? I believe so.) 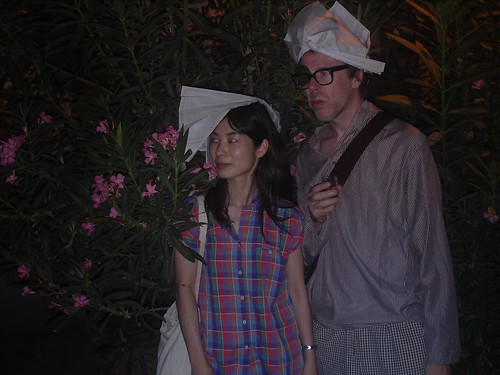 Later, we encountered The Keeper at a party in a vacant Kerameikos lot where Ylva Ogland -- whom I believe is also called The Ghost -- was folding paper hats bearing oracular invocations. Donning one of these hats and sipping the sacred Acropolean vodka instantly inducts one into the Brotherhood of the Oracle, so Hisae and I both became, immediately, priests in the Fruit and Flower religion. We were photographed in front of a sacred oleander by Pablo Leon de la Barra, who kindly conferred his own priesthood -- in the shape of his folded paper hat -- on Hisae.
Collapse