I moved to the Neukolln neighbourhood I live in because of the market that happens twice a week, on Tuesdays and Fridays. To give you some idea of the importance of this food and cloth market to me, I'll say that it can totally lift me out of the foulest mood, supply the kind of visual excitement I once got from Tokyo street fashion, and compensate for some of the limitations I run up against in other parts of Berlin. The most important adjective for the Maybachufer market is "Turkish".

Here are the gözleme girls from whom I bought my lunch yesterday at the market. They work at a window facing the street, three of them in a row. I find their pattern-clash muslim workwear style totally admirable. Gözleme is a filled, griddled flap of lavas bread, a recipe from Turkish mountain villages. You can have your pancake with spinach, cheese, lamb, potato or sweet fillings. Here's a video of someone griddle-baking the dough and adding the fillings:

There's a new "designer's market" which runs from time to time on Saturdays at the same Maybachufer location, but I have to say I find it super-lame. It's a product of white gentrification of a predominantly Turkish neighbourhood, and represents the "Boxhagenerification" of the Maybachufer (the Boxhagenerplatz market, like others in Berlin areas where the demographic skews white, focuses on slightly hip, slightly ironic goods). Stalls at this occasional, subtly menacing, designer's market sell vinyl bags with rounded 90s logos on them, models of the Berlin TV tower, twee hamster mousepads, pink t-shirts with "cool" slogans on them, perfumed soaps, and Jarvis Cocker glasses made of wood-effect adhesive. No gözleme are for sale, but sausages sizzle on grills.

The colours, smells, shapes and references of the Saturday designer's market are as "wrong" as the colours, smells, shapes and references of the Tuesday and Friday market are "right". They're "wrong" not because they're a culture I don't understand, but because they're a culture I understand all too well. After all, I'm one of the white people gentrifying this neighbourhood. Turkish people would just look blank if you said "Jarvis Cocker", but I know exactly what the cardboard Jarvis glasses and the cardboard Terry Richardson camera are about. They're references to a culture I'm part of. But it's a culture I wish would widen its horizons a bit, and love itself less.

The Wikipedia entry on Turks in Germany points out the ways in which Turks-in-Germany differ from the Germans -- and therefore, you could say, provide a corrective alternative to the limitations of life in Germany.

First of all, the Turks are younger than the Germans. Whereas 25% of Germans are over 60, only 5% of Turks are. This means that if you're living in a Turkish neighbourhood, it's going to feel a lot more youthful than a German neighbourhood. Secondly, the Turks are more urban than the Germans. They mostly opt to live in high density inner city communities thronging with small-scale commerce. This provides a bustling, lively street life notably missing from other parts of the city.

The Turks are working class, but also bi-cultural; they're likely to travel more, in a year, than the average German, clocking up air miles with cheap flights to and from Turkey. The Turks in Germany vote, massively, for the red-green alliance -- in 2005 90% of them voted for the socialists and greens. A majority of Germans, meanwhile, elected conservatives.

Turks were invited to Germany as "guest workers", and therefore there was no expectation, either from themselves or the Germans, that they would assimilate. Instead, they've integrated -- complementing German culture rather than reproducing it, becoming a syntagmatic element in the German sentence -- a qualifier -- rather than a paradigmatic one. 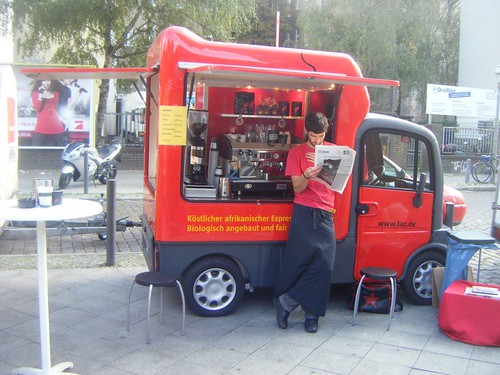 This is probably Freud's "narcissism of minor differences" at work, but if I hear music floating from a nearby flat into the evening air, I vastly prefer it to be Turkish music than anything from "my own" culture. And -- while it's nice to have art events, organic cafes and ice cream stores and trendy mobile coffee stalls in our hood -- I continue to be much more inspired by the style of the Anatolian gözleme girls on the Maybachufer than by people carrying vinyl bags with logos of the TV tower on them.
Collapse