My beloved readers! How are you doing? What have you been up to? It's been too long -- almost three months! -- since last we met.

I'm not quite sure how it happened, this gap in communications. It's partly because I went traveling. I spent a month in New York with only an iPod Touch to keep in touch. I imagined I'd have something to tell you about the music scene in New York, something I could tap out on the iPod's tiny keyboard. But in the end I was so busy doing other things that I hardly saw any live music.

The only new band I discovered this time in New York was Twi The Humble Feather, a trio who play acoustic guitars and sing in ways that remind me of the Animal Collective (though they're a bit tired of that comparison). In the video lounge at the back of Monkeytown in Brooklyn I saw the Twi trio play a refreshing, relaxing set accompanied by the quirky projected animations of Nobuko Hori, one half of the Matsuri-kei girlband Groopies. 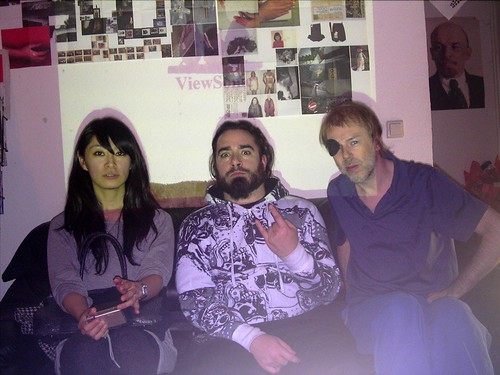 When I got back to Berlin, a funny thing happened. Kyoka, the other half of Groopies, brought the touring guitarist from the metal band Korn round to my house. It turned into a real-world re-enactment of my last column, in which I attempted to scandalize my own internal "good taste Taliban" by listening to music I wouldn't normally tolerate.

Shane Gibson sat on my sofa and politely watched the Mower videos I cued up for him, before taking control of my bluetooth mouse and showing me songs by (ahem!) "progressive metal" bands Sikth and Meshuggah. I made polite noises, but my inner Taliban hated them.

Metal music out of context doesn't have to be a bad thing, though. I heard a nice example when I attended Dexter Sinister's "documents opera" True Mirror Microfiche at the ICA in London in late June. Hunched at overhead projectors or standing stiffly at podiums, actors and art world personalities performed press releases and read pages of text, interrupted occasionally by a guitarist and drummer who played very short, very loud phrases from a Napalm Death song. The dryly cerebral texts were beautifully counterbalanced by the aggressive spurts of grindcore; the dream collaboration of Apollo and Dionysus.

But the music that's touched me most over the last couple of months hasn't been Western, and hasn't been rock. I heard street musicians in the Athens district of Kerameikos playing the most beautiful Balkan mountain music on accordion and clarinet. I held a pajama party at my flat in which we played only Greek Orthodox church music and the music of the Whirling Dervishes of Turkey, and it was the most fun party I've ever had; we whirled till our skirts spun high!

Most of all, I was impressed by an American called Jonny Olsen, who's become a big star in Laos and Thailand singing his own version of the local folk music. As the No Age blog explains, Jonny was a skate kid in California who started working in a Thai vegan café and, through it, fell in love with Thai culture.

Jonny Olsen moved to Thailand, mastered the language and several traditional instruments, and began making records. He's now a pop star there and in neighbouring Laos -- an incredible cultural chameleon, and an example to us all. With love and dedication, anything is possible!

Translated from the original Spanish by a robot chameleon. Tip of the hat to the Pulled Up blog for putting me onto Jonny Olsen.
Collapse