When you do a lot of interviews you tend to trot out rather similar answers to (inevitably) similar questions. But sometimes the phrasing of a question, a nudge or an effort -- a mental splurge further -- brings you to a new statement, a new insight which you find yourself making on the record. Those are the times it's really fun to do interviews -- as much fun as I'd imagine psychoanalysis must be.

On Friday I found myself sitting in my favourite Prenzlauer Berg cafe during a violent thunderstorm, talking to Jenna Sutela from a yet-to-be-launched Finnish design webzine called OK-DO. Just before Jenna arrived I snapped the photo above, which shows a part of the cafe sign (the word "happy") and, above it, the building's seriously bullet-pocked facade, a remnant of heavy fighting on this street between Nazis and Soviets back in 1945, and a very Berlin reminder of how even the happiest area might have been -- within living memory -- a site of strife.

Jenna's questions were nudging me towards the relationship between place and creative process, and I found myself telling her (it happens in psychoanalysis) something I didn't even quite know myself until I started saying it: that I live in Neukolln in order to incarnate the values of Prenzlauer Berg, whereas if I actually lived in Prenzlauer Berg I'd have to rebel against them.

Now, Prenzlauer Berg is what I've called an "end of history district" -- "no tension, no build, no conflict, no surprises". Here, all the problems of life seem to have been resolved, and here everybody thinks the same way. Everybody in Prenzlauer Berg is white, is creative, has excellent taste, and is reproducing. I exaggerate, of course, and the bullet scars show how recently things were different (why, even fifteen years ago this was a dangerous area, I hear). But that's the impression I get of PZBG now.

PZBG isn't Neukolln. After the interview was finished I met up with Hisae and we walked up Lychener Strasse, feeling like people shopping on holiday. There was lots to investigate: a new, super-chic stationery store, a Japanese crafts shop selling delightful handmade cloth bags from Kyoto, a shop selling sexy dresses for young pregnant mothers, the biggest organic supermarket I've ever seen, and Sasaya, Berlin's most tasteful, tasty Japanese restaurant, where we leafed through copies of Men's Fudge and Numéro Japan.

It was all great, but at the same time it was all way too bourgeois. Living here, I'd feel there were no more battles to fight, no more doors to kick open. History would stop, there'd be nothing to do but create future generations to hand one's good-taste, enlightened, healthy-living values down to.

Stuff in PZBG is stuff white people like. I'm a white person, and I like that stuff, but it all feels a bit tribal when you're there in PZBG, in the thick of it. You can't really feel individually responsible for that stuff any more. And if you're like me, you want to feel personally and individually responsible for communal and tribal values. Because you're perverse, or something. So what you do is live somewhere else, somewhere like Neukolln, and live in poverty, and only aspire vaguely to PZBG values, without ever seeing them realised around you. Because, as Kafka said, happiness consists in having an ideal and not advancing towards it. 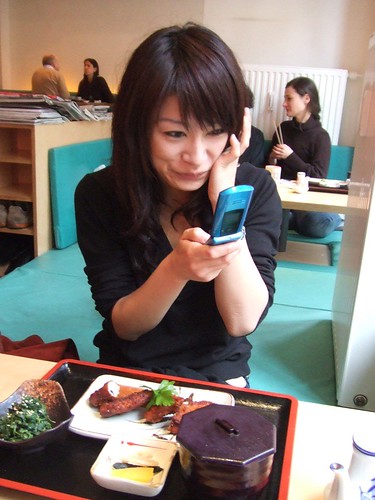 Living in NKLN as a way to keep PZBG values alive in yourself, that's perverse! But it reminds me of how I felt when I married Shazna, my Bangladeshi wife. I felt like I could, for the first time, stop slumming, stop denying my bourgeois origins, but incarnate those values completely, precisely because Shazna didn't come from that background, and perhaps aspired towards it. If I'd married someone from my own culture and class, it would just have been robotic and tribal and idiotic. But because there was a cultural exchange going on, I could actually be proud of my Edinburgh New Town values, and since I was the only one there (in Paris, with Shazna) subscribing to them, I could feel personally responsible for them, feel like I owned them.

It's also possible that I came to share Shazna's aspirational perspective towards those values, in other words that I came to see them as something difficult-to-achieve rather than something fated and inevitable. And that's a bit like living in NKLN and only making the occasional trip up to PZBG, and working to bring little bits of PZBG to NKLN without seeing the hood swing entirely that way, and feeling the strangeness and frail glamour of PZBG, on tourist trips up there, without ever having to feel it pressing in on you from all sides like an oppressive totalising tribal system, a binding etiquette, a monoculture.