2. The transition from the present to the future is one of the most mysterious things in time. Like the horizon, we never quite reach the future, but we're constantly given options or promises to transform the present into a desirable future. Making a purchase, or pressing play, can bring this future about, though of course by the time it arrives this "future" becomes merely an extension of the humdrum present.

4. Aware that I'd just used a status indicator of sorts, operated by a button, to publish this insight, I added: "For instance, a Facebook status update is clearly a "status indicator". But what if we made it a button instead? What if you were to write here things that you wanted to happen in the future, then clicked "share" to make them happen?"

5. Some interesting replies came in from friends. Keiko Uenishi (the musician oblaat) described a printer with a broken status indicator. Because its current state was hidden, its buttons only talked of future states. Without being able to read the current status of the machine, Keiko had to delve into the past, remembering the sequence of actions she needed to make to create a print ("Press PRINT BLACK button twice and hit ENTER button once"). With this printer, Keiko had the past and the future, but all that remained of the present was a blinking error LED. 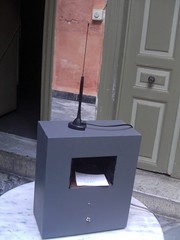 6. Artist and writer David Woodard described buying -- presumably for one of his wishing machines -- an "SPST switch... to be used in conjunction with something akin to your latter-described confused scenario. The actuator in this case is a handsome toggle, not a push-button."

7. I decided to look at hardware and software around me to see how consistently the play button was implemented. It turned out that everybody had a different idea of the relationship between present and future, and implemented their play buttons differently. On my old Tesla spool-to-spool tape recorder you rotate a mechanical switch to play and return it to the original position to stop. The mechanical rotation of the play switch makes it an effective status indicator. My cassette recorder works in a similar way, but adds a separate stop button.

8. Audio and sequencing software on my computer does PLAY in a bunch of different ways. In Audacity there's a play button that doesn't change or light up when clicked, but plays the file, and a stop button to stop it. Neither indicate their current status. In Garageband there's a play button that lights up when clicked, but remains a play button. No stop button; you click the play button again to stop playback, and the "active" light goes off. The play button denotes "stop" by being deactivated, but of course you only know this after you use it. If you haven't used it, you may search around for the stop button. In Quicktime and iTunes there's a combined play / pause button that activates visually only during the click, plays the file, and then -- like the lover who turns into a pizza after orgasm -- turns into a pause button.

9. You probably know how the YouTube play button works, but to remind you I'll post this video of Devo's Time Out For Fun, re-edited, rather brilliantly, I think, by

yhancik, who uses Echo Nest to slice the second and third beats out of every measure:

10. So, as you can see, in YouTube the play button "becomes active" when you merely hover over it (confusing if you're used to the Garageband style, in which lighting up means the button is actually playing), then becomes a pause button while play is happening (Quicktime style). One way of describing this kind of button is as a "butler", always keen to know your desires, but too tactful to tell you the truth about your current state.

12. Before we get drowned in tech-geekdom, let's look at a slightly more exciting example of Status / Play confusion: the nude filter on the 4u Beauty Image Bookmarking site.

When you arrive at the 4u page you see a small black oblong box, top left, marked "Nude filter: ON". It isn't immediately clear whether it's a status indicator or a button. Is it telling me the nude filter is on, or offering a way to switch the nude filter on? You approach to click it and the button changes colour from black to pink. Suddenly -- although you haven't clicked anything -- the message switches to "Nude filter: OFF". You click that and the page reloads, this time showing more naked flesh. Aha, so it was a button combined with a status indicator saying what happens when the button isn't pressed!

14. Things get even more confusing when, as with the 4u button, double or triple negatives are involved. NUDE FILTER OFF contains, if you think about it, three negatives. NUDE means "clothes status: negative". FILTER means "switched off". And OFF means off. So ask yourself, do you want to switch off the switching off of the offing of clothes? Add to this the uncertainty of whether the black oblong is asking you this or telling you it, and you can only be thankful this isn't a control in a jet or a spacecraft. Let's never forget what happened to NASA's Mars Orbiter.
Collapse