The earnest student of mankind via his tools has a choice between the sane, logical layout of a culture's newest human devices -- and, by implication, its conception of knowledge and its vision of the world -- in a modern store like MediaMarkt or the insane, cluttered and absurd layout of yesterday's tools, technologies and trash in a flea market. In the Berlin district of Neukolln the temporal distance between the sanity and the insanity of objects is a brief five minutes -- the time it takes to climb the hill from the big MediaMarkt in the Neukolln Arcaden to the Flohmarkt in the car park beyond the old Kindl brewery.

But can this neat distinction between the sanity of new objects and the insanity of old be maintained, when you visit them both in quick succession? A kind of irrational excitement grabs me in MediaMarkt when I -- for instance -- look at the pocket data projectors, an excitement which has nothing to do with any objective "need" for such a thing. And might there not be a kind of wise poetry in the irrational layout of the flea market, a serene sense of affectionate detachment from human culture, an older, wiser take on the follies and foibles of past production? 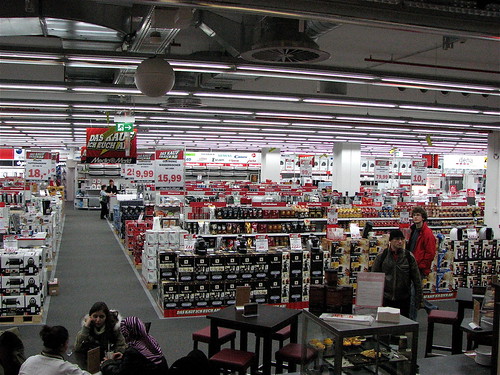 After a visit to the flea market, it's MediaMarkt which begins to look frail and irrational, its styles balanced precariously (precisely because this "media" comes so directly from the present and nothing but the present) on the edge of obsolecence, its textures charmlessly pristine, puritan, frigid, unloved and unlovable, its appeal based on all the worst aspects of human nature (for laziness is what draws us to convenience, restlessness and boredom to innovation, conformity to the latest must-have, and so on).

In some weird way, MediaMarkt (several football-fields'-worth of fluorescent-lit, air-conditioned Koolhaasian junkspace) and the Flohmarkt change places, and it's the flea market which represents what is cutting-edge, clever and new. It's at the flea market that panhandling pioneers sieve gold from the obscurities of the anxious interval. And it's at the flea market that I can become a dung beetle, rolling my own special ball packed with the future, rife with fertile possibilities.

For where else but the future can these communist opthalmologist's glasses with their strange nasal rubber bridge come from? Yes, yes, the past, of course they come from the past, but it's a past so forgotten, so sublimated, so de-contextualised that it looms before us like a spectre of the future, with the future's strangeness, the future's deviancy, the future's capacity to shock us out of our complacency and see human production -- the huge machinery of the concretization of our conception of the world and our place in it -- as gorgeously, ridiculously, ingeniously, patently insane.
Collapse