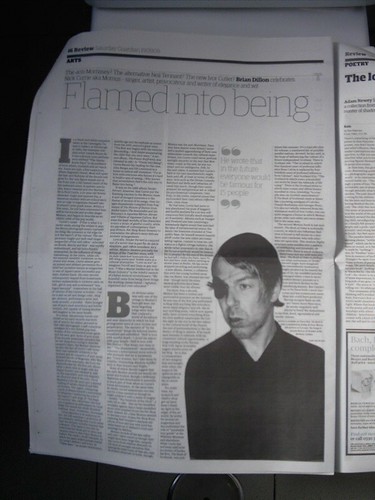 There's a big Momus feature today in The Guardian Review. It's written by Brian Dillon, and, with impeccably lucid style and all the right references, covers my entire career, from Edinburgh 1980 to Berlin 2010. The records and books are reviewed as if they're all essentially part of the same enterprise, which I think they are, and Dillon sees me becoming a sort of Ivor Cutler figure in later life, a fate I'd be happy to embrace (Cutler is a hero of mine; perhaps when I met him at the Photographers Gallery cafe ten years ago I was meeting my future).

I'm in Madrid for the next four days. There's a lot happening in the Spanish capital this weekend, with a big council-sponsored festival called La Noche En Blanco, White Night. That's being countered by an alternative protest event called 364 Noches Sin Blanca, 364 Nights Without White, in which independent artists complain about Madrid's cultural scene the rest of the year round. Somewhere amidst all that, I play a Momus show at La Pequeña Bety, Calle Reina 4, Madrid.
Collapse