Concert: At my Madrid concert I punctuated the songs with staccato announcements: "I have only three eyes", "Death is not not the end", "Revenge is best consumed sweet" and "This is not my real hair".

Bidet: There's a cultural fault-line that runs through Europe. Some countries believe in the bidet, others don't. France and Spain do, Germany and Britain don't. Personally, I believe in the bidet. I believe even more strongly in the washlet, which is an electronic bidet built into a toilet. But I wonder why adoption of the bidet -- a matter of basic hygiene and, if you like, human rights -- isn't something the EU is working on getting adopted on a Europe-wide basis. Why isn't it a party-political issue? Why aren't the Liberal Democrats saying "If we get elected, it's bidets for Britain!"? Why are bidets off the platform and off the table?

Hotel Wifi: My hotel has the worst wifi system I've ever encountered. You pay €10 a day, but 85% of the time it doesn't work. Given the choice between sweet-smelling hindparts and a connected brain... well, take the bidet away. 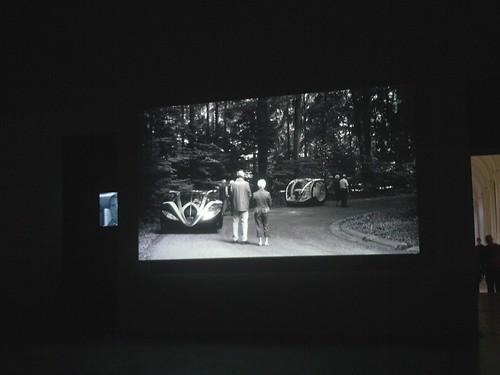 Contemporary Art: The best piece of contemporary art I've seen in Madrid is a video / sound installation by David Maljkovic called Out of Projection. Accompanied by soothing microsound music, we see some silver-haired seniors preparing (in sound-baffled rooms) to take part in some sort of sci-fi rally. There's something vaguely Matthew Barney-ish about it. I really enjoy art that sets up -- but doesn't attempt to explain -- alternative worlds.

Food: Lumpen paella followed by bony fish, conveyor-belt sushi with no tuna. Outside a central Madrid McDonalds an animal rights protestor stood with a battery-powered LCD screen around his neck showing cattle being slaughtered.

Women: Spanish women catch my eye in a way German women don't. There are certain faces that recur, but it would be beyond my powers of description to catch them: I'd just pile up adjectives like simian, alert, trad, radical, dark...

Camouflage: An exhibition about camouflage at the Casa Encendida. I liked a pine cone bunker house at Vallerbe. At the Reona Sophia museum they had an interesting display of Oskar Schlemmer's Bauhaus theatre designs. At one point in the 1920s it really did look as though Michelin Man-type robots were the future of theatre. If only they'd known the future was actually going to be The Mousetrap and Les Miserables they could have got the students up to speed on the 19th century instead.