Sitting in the station reading the English-language version of El Pais, the Spanish newspaper that comes with the International Herald Tribune, I found an article about mosques in Spain. Headlined "Mosques? Not in my neighbourhood!", the article describes how "when a group of Muslims decides to open a mosque, the neighbours mobilize to stop the project". People think their house prices will plummet, that bearded terrorists will walk their streets, that there'll be noisy calls-to-prayer, and so on. Since the mid-90s there have been 60 blocked mosque projects in Spain, often on technicalities ("fire hazard"). As a result, Muslims gather in much more discreet, architecturally low-key prayer centres. 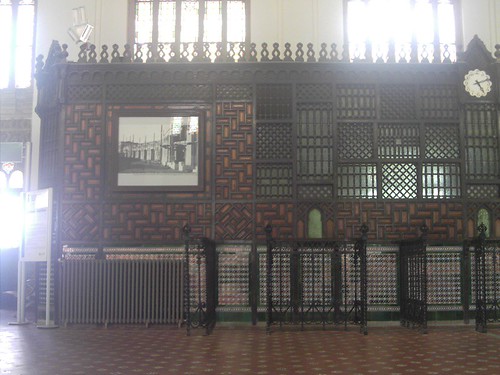 None of this information prepared me for the beautiful shock of arrival in Toledo, an ancient walled town about half-an-hour by train from central Madrid. In fact, if anything proves that Islamic architecture increases your house prices, it's Toledo. The station is a tiled Moorish fantasia, pure Morocco. Climb through the labyrinth of streets to the top of the hill and you sense the layout of a middle-eastern town. The abbeys are organised around central courtyards featuring fountains in the arabic style. The post office is an exotic north African space. Everywhere you find patterned tiles, bulging rounded gridded windows, buildings called "alcazar" and "alhambra". There are synagogues and Christian buildings too, of course -- and even a Chinese-looking house built by a Spanish Inquisitor -- but the Muslim presence is one of the things that makes Toledo a treasure. 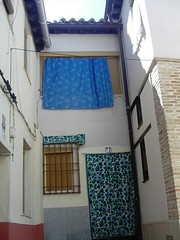 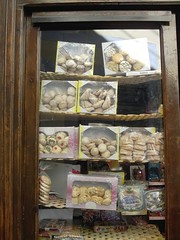 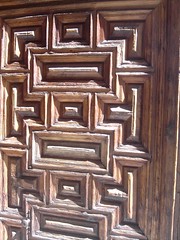 Back in Madrid yesterday evening, I went to the World Music section of 24-hour culture store FNAC. I was hoping to find a CD similar to one I already have, a recreation of Arabo-Andalusian medieval music (you can hear samples of it in my song Going For A Walk With A Line).

I asked the assistant where I might find such a fusion. "Oh," she told me in Spanish, "there's Arabic music and there's Andalusian music, but they're different things." Eventually -- and, it seemed, reluctantly -- the assistant dug out two CDs that contained the required fusion. It had happened somewhere, apparently, just not in her back yard.
Collapse