1. These are my observations after a week spent in Madrid and Paris. They concern the visual. My basic theme is that I, personally, am only excited, visually, by the street spectacle, the habitus, of... well, let's employ, just for fun, a hideous acronym for the people I'm talking about. Let's call them the NANI: the non-assimilated non-indigeous.

2. The story so far: ten years ago I might have come back from a trip to Madrid and Paris raving about a "cybercafé" or a conveyor-belt sushi bar. These days, I really only respond positively to immigrant districts, and this is probably because I feel the real action is happening elsewhere, in the populous places these NANI immigrants hail from: Africa, India, the Far East.

3. I'll say it loud and I'll say it clear: we in moribund old Europe are lucky to have Indians, Africans and Muslims in our cities. Left to its own devices, our own culture will only get older, fatter, uglier, slower and more complacent, with more selfish cynicism and bigger walls.

4. But let's get back to the purely visual. Here is a picture of what white Europeans look like. These are people in a reading room at FNAC, a culture superstore in central Madrid selling books, CDs, DVDs, computers, game software, phones.

5. Now, it's wonderful that these people want to read, and wonderful that FNAC gives them the space to do that without necessarily purchasing anything, like a reference library. I use this photo simply to show you that these people mostly wear jeans, white-ish t-shirts, and white-ish trainers. They wear, in other words, the voluntary but universal uniform of "the monoculture".

6. When generalised -- on a street, for instance, or at an airport -- this uniform blurs into a gun-metal blue glow. It speaks of a cold and hard but casual and convenience-fixated culture, one which puts aesthetics rather low on its list of priorities. 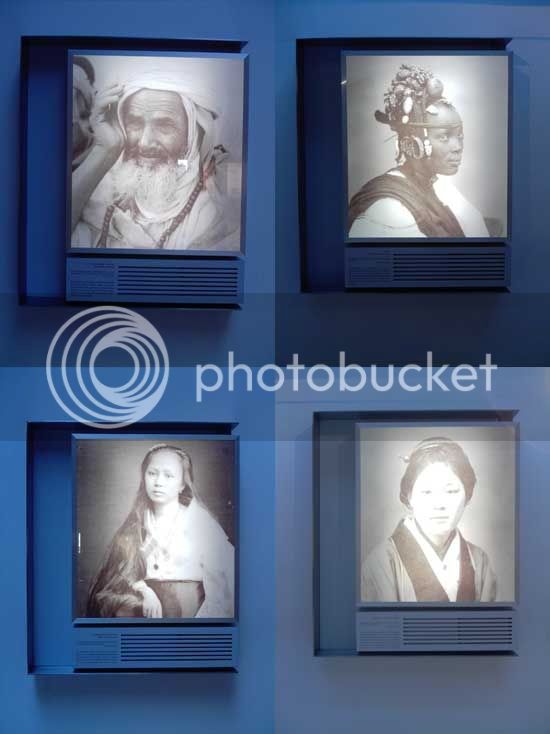 7. To really see our gun-metal blue culture in context as a thing-in-itself you need to estrange it, make it distinct, isolate it. You can do this by visiting an ethnographic museum (like Madrid's National Anthropology Museum, in which the above photos are displayed). Here you will see traditional cultures which the gun-metal blue culture has sent en voie de disparition, just as it has endangered the diversity of animals and the diversity of languages spoken.

8. If you're like me, you will have the following thoughts in the anthropology museum. One: "Our way really is not the only way to organise human life." Two: "Nor is it necessarily the best way." Three: "Wow, this stuff is so beautiful!"

9. If you are, furthermore, the kind of person who goes to art biennials, you might happen to stop by the 10th Lyon Biennial (or at least its website) and read this statement by Chinese curator Hou Hanru: "We are living in the society of the spectacle. In spite of its alienating effects on our life and social relationships, it’s one of the very fundamental conditions of our existence. We perceive the world and communicate with each other through the spectacle – a system of image production and representation dominated by the logic of market capitalism which tends to “develop” our faculties of perception, imagination and reflection towards a “one dimensional model” formatted by the language of consumerist ideology. This is also the very contemporary condition of our self-identification and social order “guaranteed” by the established power system."

10. The Calle de Fuencarral is a tree-lined, semi-pedestrianised alley bisecting from the north Madrid's main thoroughfare (its "Oxford Street"), the Calle Gran Via. It's bounded by some sketchy areas where drug-dealing and prostitution thrive, but the Calle de Fuencarral itself incarnates "funky youth capitalism" in a chic, glossy package. Alongside tattoo and piercing parlours, hip graffiti and skateboard stores, you'll find familiar international monocultural marks: Camper, Lois, G-Star, Muji, Puma, Diesel. As if culminating in the grand-daddy of all monocultural marks, the funky part of the street terminates at a gigantic McDonalds.

11. Now, in my sideline career as a consumer-slash-design journalist (I date this career from 2004 to 2008) I would probably have had to rummage around amongst the brands on the Calle de Fuencarral in order to find something to celebrate. In fact, I did: last year I blogged about Muji for the New York Times. And one reason I put 2008 as the termination date for this sideline career is that I have found it increasingly difficult to find anything to be enthusiastic about in this supposedly-funky, supposedly-hip, supposedly cutting-edge culture, which is simply the monoculture's consumerist training wheels, and which does indeed culminate in McDonalds.

12. Let's switch to Paris. Did you know that the current show at the Cartier Foundation is celebrating graffiti, tagging, and street art? I didn't go, because graffiti, tagging and street art, especially as bought into (in the name of "inclusiveness") by bling culture and the fashion world bores me to tears.

13. And did you know that Takashi Murakami, whose designs for Louis Vuitton bags both poked fun at and celebrated the bling-spectacle-monoculture (cake and eat it!) is showing his self-portraits and flower paintings at Perrotin? His self-portraits are bad (Murakami as childish cartoon of himself, Murakami reductio ad absurdum) but his flower pieces in the back room are quite nice. Everything costs millions, naturally. Bling bling bling bling bling bling "bling". Wink.

14. I went to Colette. Colette bores me to tears too now. Their fashion floor features the same old black "designer" clothes it always has. Black black black black black! With bling prices! At the back, they've leased a few cubic metres to Uniqlo, who are opening a big store in Paris soon. Uniqlo -- whose clothes are some of the most boring, monocultural cotton and denim factory rags in the world (but are at least cheap) -- gets some sort of brand-establishing prestige out of being seen in Colette, and Colette gets, well, lots of money for renting them the space that used to house their quite-good art bookshop.

15. Here is a Spanish woman in trad Spanish clothes, someone I saw on the street in a not-yet-cleaned up district of Madrid, near the El Rastro market. She has a black shawl and a red flamenco dress. She is not wearing Gap or Uniqlo, please note. This world would not be a better place if she were.

16. Thank Christ for the Muslims! Here are some veiled women waiting at the lights in Le Marais, Paris.

18. The pink and white outfit is wonderful, especially seen in a 19th century arcade. The blue robe in the phone box is top-to-toe gorgeous; the blue of a hot blue coral sea. Why can you not buy hot blue coral sea robes at Colette? Because everything in Colette is black, or gun-metal-stroke-denim blue. Unlike the Indians on the Rue du Faubourg Saint Denis (with their amazing colour sense), we do not do colour. Or if we do, we do it only in our kids' clothes, the ones you see in MiLK magazine, the only French fashion magazine that still impresses me.

19. The town of Toledo impressed me, though. You know, the monoculture may think it's big and tough and all, but it's upstaged on all sides. It's upstaged by its own past, by the children who represent its future, by the economic migrants on its margins, by the traditional cultures it habitually crushes, by its own exported and outsourced production facilities, by the uniforms of its menials, and by its abject and its homeless. And while these categories of people upstage the monoculture in beauty and interest, its own engines and supports (its banking system, for instance) buckle and collapse beneath it.

20. The most exciting visual culture thing I saw all week, I think, was the Senegalese beauty touts crowding the exit of the Chateau D'Eau metro station in Paris. When black women come up the stairs of the metro, the touts entreat them (very much hands-on) to come to their own particular hair salon. It's strident and competitive, men begging women, flirting with them, flattering even the fat and ugly ones. The women smile, demur, sometimes agree. At first sight it looks like outrageous sexual harrassment, but it's simply a culture-within-a-culture, a little urban ritual for a people almost insanely dedicated to beauty.

22. You know, when it's Senegalese getting their nails done in Paris by South Koreans, the whole NANI thing breaks down. Who's more indigenous than whom? Who's more assimilated, and to whom? It doesn't really matter any more. The hub is forgotten, the centre cannot hold, and for that let us dance a joyful logobi.
Collapse