The trouble with writing about world hunger -- as I did yesterday -- is that any other topic pales into triviality next to it. And yet one of the things the ongoing and super-inspiring North Korean films at the Asian Women's Film Festival are teaching me is the value of taking great pleasure in the cheap, simple things. The high point of yesterday's film A Bellflower was the illumination of a bare light bulb in a mountain village electrified for the first time. 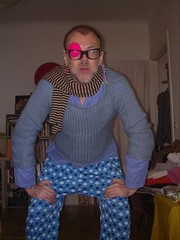 I take a lot of pleasure in dressing well-slash-cheaply-slash-eccentrically. I also take a lot of pleasure in seeing other people dressed well. The arrival of wintry conditions to Berlin in the last week or so has provided a few simple pleasures related to the re-discovery of woolly winter things, like an Ital hat I found in Palma Majorca, or an old black cape. I enjoy posting pictures to my Flickr page of myself dressed in some new cheap, weird find from the local market. These three euro diamond baggy PJ-like tights, for instance, were pure impulse-buying (actually Hisae suggested I get them) but worked out well. "YOU are my style apparent. Period." writes someone called Ashley under the photo.

Reviewing an art show called Scorpio's Garden recently for Scottish art mag Map, I saw someone whose style I really admired: an artist called Fiona James, who put on a performance which involved dancing, marking her tights with a marker, and mimicking Ayn Rand by standing, whitefaced, in a projector beam and miming along with Rand's words in a TV interview. James was wearing a blue tunic-dress and grey tights, and something about her made me feel she'd arrived in Berlin from London recently. She had that fresh-off-the-boat feel, as if Berlin were still liberating her, and enhancing her London style, rather than dowdifying and provincialising her, as it might do later if she "lets herself go" here.

I sometimes think that Berlin is a place where people "let themselves go to seed", visually. Because the city is removed from the capitalistic hubbub of cities like New York, London and Tokyo, people end up spending less money here on hair, make-up and clothes. Now, that only shows in people who lack the nous to replace cash with dash -- it certainly hasn't applied to stylish friends like Emma and Joe, coming up to the anniversary of their arrival in Berlin.

For those with the will and the imagination, Berlin's plethora of excellent markets does allow you to dress well here for next to no money, and I think this "post-materialist" style more than compensates for the absence of super-trendy hairdressers or whatever.

I'll be in London next week, and Tokyo in a few weeks, and I'll be paying close attention to the look and feel of those cities. Is the recession giving them a more Berlin feel, a more down-at-heel (but cheap-and-cheerful) feel? Will I see breathtakingly interesting-looking people on the streets, making original gestures (like the gel shoe worn by a member of the Asoko Koenji artist party, above)? Will I think to myself "We don't -- we couldn't -- have people like this in Berlin"?

Mostly -- like my New York friend Hikaru, whose WonderWonder blog documents the preference with advanced visual gorgeousness -- I find non-Western clothes the most inspiring thing these days. The clothes in the North Korean films are wonderful, Indian colours take my breath away, African patterns clash boldly, the older, more trad Turks in my hood command my respect. Suits and jeans remain the designated sartorial enemy, unless you really tweak them and take them somewhere strange. In that sense, suits and jeans are to dress style what painting is to the art world; you generally have to go a little further with those media to justify the evident conservatism of your choice.
Collapse