Yo ho ho, life's little piracy-ironies! The same day I blogged about a dastardly plan to rewrite the archives of my old New York Times column The Post-Materialist and hand the results over to Dexter Sinister to be printed in a pirate broadsheet produced directly opposite the New York Times building, the New York Times itself (the real one... I think!) published a contribution by me in a Room For Debate article called Beauty and the Bento Box!

Since the article was sliced, diced, pickled and boxed editorially (which had the nice result of making it universally liked in the comments section, but a bit more wishy-washy and apolitical than I'd intended), I thought I'd post here the piece as originally written, full-flavour. The difference between this and the text that appeared in the Times yesterday is another form of the "doubling" or "ghosting" that so much interests those Dexter Sinister fellows.

As a Scot who's lived in the US, Europe and Japan, my experiences convince me that Japan is far ahead when it comes to the aesthetics of everyday life, and that America lags well behind.

Of course, the cultural relativist in me balks at that, objecting that American, European and Japanese ways of doing things are simply "different". And an alarm is also set off by my preference for the older cultures' way of doing things; might I simply be a romantic conservative, preferring the traditional to the modern?

My understanding of American culture is rooted in my understanding of my own Scottish culture. I see US culture as an amplification and modernization of some not-so-positive Scottish traits, namely our Protestant puritanism, pragmatism and meanness. Calvinist Protestantism -- and I agree with sociologist Max Weber about its deep cultural influence on modern capitalism -- values efficiency, thrift and convenience over beauty, pleasure and elegance (seen as suspiciously Catholic values).

When you put this Protestant puritanism together with the untrammeled, merciless mega-capitalism of mergers and acquisitions and a consumer base whose motto seems to be "Give me convenience or give me death!", the result is the stereotypical American landscape of today; thousands of miles of drive-ins and strip malls featuring blanded, branded, standardized food made with corn starch and refined white sugar.

Where time is money, sandwiches are food. This is axiomatic for rushed Anglo-Saxons raised in bread-based, pragmatic cultures. But other cultures have different solutions to the problem of lunch. In Japan they have the bento box, an ancient and elegant way to pack the maximum amount of portable, pre-prepared protein -- picked vegetables, cold chicken or fish, rice -- into a space the size of a screenless laptop. 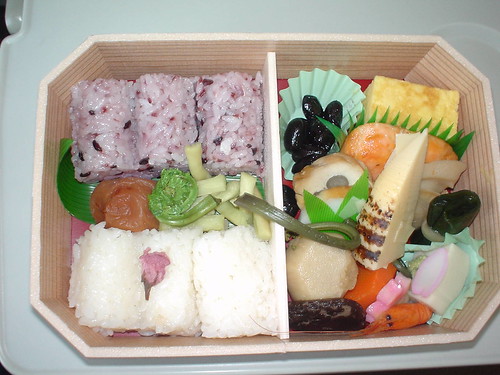 Although the bento is a fast food delivery system, aesthetics are important; an ekiben, for instance, is a bento box sold in a train station, usually wrapped in a gorgeous traditional patterned paper cover somewhat akin to a summer kimono. It's a far cry from a Burger King box, and the food inside leaves your body in better shape too.

Of course, if American political priorities were slightly different -- but no, it's wider than that, it's really cultural habitus which would have to change -- the national diet could be improved.

France considers its art and food "cultural exceptions" and protects them, ensuring that small food producers aren't run out of business by multi-national corporations owned by tobacco companies. The Japanese government also supports and protects the small neighborhood businesses which account for 70% of all Japanese employment, offering them interest-free loans.

The irony is that American convenience culture isn't, finally, very convenient. Life expectancy at birth -- an important measure of national well-being -- is currently a full four years shorter in the US than it is in Japan. Maybe that motto ought to run: "Give me convenience and give me death!"

Now, I don't reproach the Times for turning my spicy bento into a bland lunchbox. The piece wouldn't have existed at all without them asking me to produce it. I signed off on the text as published. And even the version I've just given you is somewhat "collectively" written, since the editor asked me to add the bits about the bento boxes.

The Times also added a promotional bio advertising my books and records rather than let me witter on too much about capitalism being evil, which is certainly kinder to the capitalists publishing my books. And to me, in the end. If I have things to say, after all, I'm free to put them here on Click Opera, or in books, or records, or the ghost newspapers swishing about during Performa.
Collapse