I spent quite a bit of time yesterday (but it was alright, because here in Berlin it was cold and raining) shuttling back and forth "in New York" between Stuart Bailey, my new "editor" at TF/LN (The First / Last Newspaper) and Jonathan Paul, the editor of The Moment, the New York Times style blog. Basically, TF/LN, a temporary newspaper that art-design group Dexter Sinister are publishing during the Performa Biennial, launched yesterday, and I wrote a spoof column for it, The Ghost-Materialist, which picked up where my real column for The New York Times, The Post-Materialist, left off back in January. You can read the first Ghost-Materialist in a ghostly location here on Click Opera; I've secreted it, spookily, in April 2008, which happens to be the month I started writing the Post-Materialist too. It's entitled Paris Druggery-Pokery and tells a tall tale about Paris fashionistas abandoning select store Colette in favour of an insignificant droguerie-menage store in the 17th arrondissement.

Things got complicated yesterday when the real New York Times got interested in publishing the spoof column as well. It looks as if they'll be running it slash running a piece about it on Thursday. Now, TF/LN is being put together across the road from the New York Times building, in the Port Authority building at BLANK SL8 (corner of Eighth Avenue and 41st Street), in a continuous piece of what Dexter Sinister like to call "performative publishing". They love ghosts, mirrors, doubles and Pynchonesque-Kafkaesque semi-legitimate parasitical operations (the alternative post office in Crying of Lot 49, the alternative court system in The Trial), and this publishing operation is very much the ghost-double of The New York Times.

So what we have now is the real New York Times sitting up and taking notice of a weird temporary ghost-double across the road. Dexter Sinister's operation is intended to "reflect on the unstable condition of contemporary news and related medias", and this comes at a time when newspapers are, more than ever, questioning themselves existentially. Oddly enough, the first thing I did when I got the NYT job is question the legitimacy of the people offering me the job. I went so far as to construct a paranoid sting spoof in which an entire facade of The New York Times, with its own convincing fake website, had been constructed to entrap and ensnare me. In the end I concluded that it didn't really matter whether this was "fake NYT" or "real NYT"; the logic of the Woody Allen joke about not telling your brother he isn't a chicken "because we need the eggs" applied. I needed the eggs, so I acted as if The Moment really were the New York Times. In a sense, though, this "paranoia" reflected a reality: that "the New York Times" is making itself up from scratch every day. That it, too, is, in a sense, a daily parody of The New York Times. Hence its interest in somebody across the road doing, essentially, the same thing.

Dexter Sinister launched their TF/LN at a party last night in New York during which they screened Farewell, etaoin shrdlu, a 1980 film directed by David Loeb Weiss which documents Linotype operator Carl Schlesinger's last day -- and the New York Times' last day -- of manual hot metal typesetting, which occurred on July 2nd, 1978. As the San Francisco Chronicle explains, "etaoin shrdlu" is the phrase you get when you strike the first twelve keys at the left side of the Linotype keyboard. If a line of type got garbled, you'd write "etaoin shrdlu" just to indicate that it should be removed, but sometimes the error crept into the printed paper, along with the tag (rather like QWERTYUIOP or LOREM IPSUM DOLOR SIT AMET). 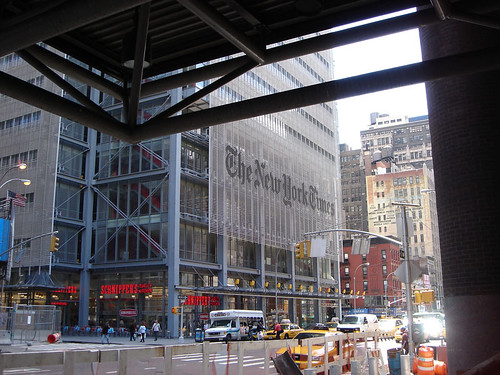 Thirty years after the end of hot metal typesetting, newspapers are in a much deeper crisis. Should they charge a cover fee at all (the Evening Standard in London just went free)? Should they wind up their paper editions and go online-only (The Moment is an online-only feature in The New York Times)? What does 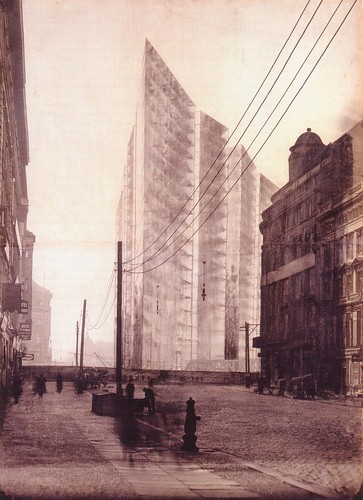 "newspaper" mean, in the age of Google News personalisation filters and the Facebook newsfeed? Can "news" mean whatever you want it to mean? Are we all on the same page?

I recently visited The Guardian's shiny new office in London. Rather like The New York Times, the paper moved into amazing and expensive new premises mere months before being pummeled by the twin blow of economic recession and plummeting advertising and circulation figures. The Guardian's new home is a curtain of wavy glass backing onto a tranquil canal. It blends seamlessly into the King's Place arts complex next door, to the extent that you feel that it might be becoming an upmarket culture brand rather than a paper. The New York Times, meanwhile, has reportedly been letting out office space in its new tower on the square named after it.

Something about newspapers in shiny new buildings in the 21st century reminds me of Mies van der Rohe's never-built 1919 design for a glass skyscraper on the Berlin Friedrichstrasse. There's a delicious incongruity, visually, between the essentially 19th century world of the newspaper, with its gothic type and its print works full of (we imagine) artisans slaving over hot type, and the glass-and-numbers, smoke-and-mirrors world of computers and high finance and precarious immateriality newspapers currently inhabit, and seem destined, ultimately, to be undermined by. I wonder if the glassy New York Times, faced with a handmade broadsheet across the road, is being stalked (and serenaded) by the ghost of its true self?
Collapse