I'm a little too jet-lagged at the moment to claim to be whirling up the Japanese archipelago like a cultural typhoon, but I do have some early interests. Mayonaka is publisher / gallery Little More's regular magazine, and the current edition sees an inspired teaming of their regular designer Kazunari Hattori with conceptual manga man Yuichi Yokoyama, who's taken photographs of children and dropped them into his characteristic halftoned, colourblended backgrounds, or inserted his oddly abstract baseball-capped figures into their midst.

Mayonaka is the most inspiring magazine I see on the Japanese racks at the moment, and Little More are little wonders. On Saturday night the gallery's biggest star, 28 year-old photographer Ume Kayo, appeared in a panel talk at Osaka's AD&A Gallery.

We've met Ume Kayo before on Click Opera, in a somewhat gossipy context. In My disappearing little dick she appeared as (nudist, bohemian, photoblogger) Patrick Tsai's love interest. Pat Pat (name-checked on the Joemus album for his rock-diving exploits) was, at the time of telling, heading to Japan to pay court to Kayo, having been "thunderstruck" by her at a french photography biennial. The quest for Kayo's favour seems to have failed; Pat Pat is now with someone else. 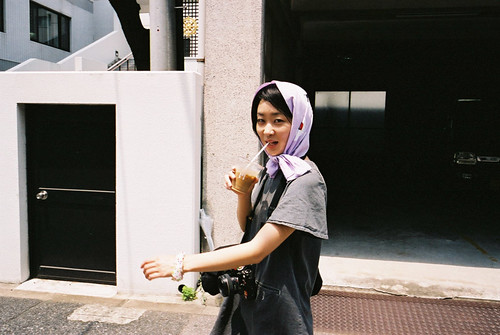 I missed the Kayo appearance on Saturday, preferring to sleep deeply, catching up timezones one by one. But Hisae went with her friend Kazumi and reported that Ume Kayo had spoken of her influences: a Japanese wildlife photographer famous for his shots of bathing monkeys, and Ninomiya-san from Johnny's idol group Arashi, and more specifically his erect boy-nipples. (Here Hisae could totally identify.)

A cursary leaf through Ume Kayo's three photo books in, say, your local branch of Tsutaya will give you the impression that her favourite subject is people goofing around. Her first book, Umeme, won the Kimura Award and scored sales of over 100,000 copies for Little More, her publisher. That was mostly Ume and her friends goofing around, giggling at the sight of a bald man with a grain of rice on his head, and so on. The next book, Danshi, sold "only" 40,000 copies and focused on schoolboys goofing around in playgrounds. Her latest, Granpa, is a tender study of Ume's grandfather goofing around.

Last night I drank a lot with some of Hisae's Osaka friends and ended up doing synchronised enka dancing and thinking -- as you do when drunk and jet-lagged -- about how different socities organise inhibition and disinhibition. I must say I admire both; a semi-legenday character like Pat Pat impresses me for his mad Baal-Byron exploits, his disinhibited impulsiveness (although only a certain tweeness saves that stuff from Dash Snow-style tragedy). But ultra-shy, ultra-quiet, inhibited people impress me too. I really identify with their interiority, their withdrawal.

I wouldn't do anything as crude as align Japan with either inhibition or disinhibition. Clearly, though, this country has very distinctive ways of organising when and how you transition from one state to the other. From the extremes of one state to the other. For Japanese people can be the most massively reserved, autistically detached people in the world. And yet, as a drunken night of enka singing -- or the photographs of Ume Kayo -- demonstrate, they can be super-disinhibited when etiquette calls for it. And that -- the fact that there's an etiquette of disinhibition just as there's an etiquette of inhibition -- is an interesting paradox in itself.