We're coming to the end of our time together, dear Click Opera readers, and it strikes me that there's a huge amount you don't know about me. Really basic stuff, too; the kind of thing that would be in the first couple of chapters of an autobiography. Just how major, traumatic and formative an event it was for me, for instance, to be transported from Athens (where my family had been posted by the British Council) to boarding school in Scotland at the age of ten. I spent three years in an Edinburgh Academy boarding house, wishing profoundly I were somewhere else.

I remember two things I said back then, one to my friend Thomson and one to myself. To Thomson I compared Edinburgh with Athens and called the Scottish capital "a cluster of shacks on the horizon". Now, this wasn't true at all; Edinburgh holds up well against Athens, objectively speaking. But it expressed my need for a here / elsewhere binary in which the elsewhere had the starring role. I was a Romantic, a little Lord Byron. I even started telling some of the boys I was Greek, not Scottish. I loosened my Scottish accent, adding some Thames Estuary vowels just to confuse people. 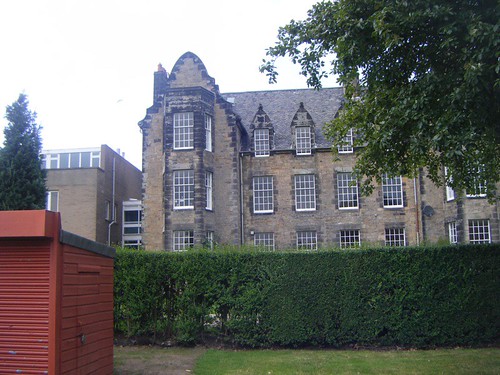 The other thing I remember saying -- to myself this time -- is: "I will be try to be less influenced by my surroundings". In Mackenzie House I was very aware of the pressure to conform -- to use the same slang as the other boys, to mimic their jokes, to read what they read and listen to what they were listening to. In some instances I let my resistance crumble; in the padded music rehearsal rooms and up in the Senior Common Room I was introduced to T. Rex and David Bowie, and saw no good reason to block them out.

But I very much wanted to hold myself apart from the culture that surrounded and threatened to engulf me. Books provided the secret, premonitory, consolatory world I could escape into: Joyce's Portrait of the Artist as a Young Man, Dylan Thomas' Under Milk Wood, Eliot's The Wasteland, Orwell's Nineteen Eighty-Four and Burgess' A Clockwork Orange. If the bildungsroman offered an idealised portrait of myself, the political dystopia could mirror the "total institution" I was living in rather well, and offer methods -- more or less successful -- for resisting it.

Boarding school convinced me that males (the other boys and the masters) were ultraviolent bullies or vulgar clowns. They had power over me, but didn't have my best interests at heart. They were often out-of-touch; the housemaster, for instance, knew what a transistor radio was, but not what a cassette tape recorder was. When he caught me, down in the changing room one day, listening to a tape, I explained that the school rules banned radios but said nothing about tape recorders. "It's a radio!" said Quack Mendl, and confiscated it, just as he'd confiscated my American army cap, my copy of The Little Red Schoolbook, the Hair songbook, and even Roget's Thesaurus. He caught me reading that after lights out one evening by torchlight under the blankets. (Yes, I read the Thesaurus for pleasure. Yes, I was weird.)

Something else I resisted from an early age was relaxed, American-style populism. It made me shudder to hear The Beatles singing "yeah, yeah, yeah". The proper word was obviously "Yes". "Yeah" seemed vulgar and cravenly opportunistic to me, a caving-in to Americanism. It was the same with "Hi". Why couldn't people say "Hello" instead? If people said "Hi" to me I answered "Hello" back. As for television, it's just as well my parents forbade us to watch the commercial channel, ITV. It would have horrified me with its familiar vulgarities.

Where am I going with this? Oh, I remember now. I wanted to talk about the internet, and how odd it is that I still, quite often, want to take a hot shower after exposing myself to it. How could that be? Surely the internet is a place where you determine your own "programming"? No longer do you have to say "I will be less influenced by my surroundings"; on the web, your surroundings are whatever you make them. No longer do you have to practice subtle tactics of evasion; what you click on is entirely up to you. If you "watch" life-cheapening rubbish on the internet, there's no condescending programmer to blame, no idiotic audience of undiscriminating morons dragging everything down to the lowest common denominator. You chose this stuff. The moron is you.

So why do I know more than I want to know about the feud between Jay Leno and Conan O'Brien? How did Apple manage to make me so excited about a new product announcement? Why did I read stories about a comedian called Andy Dick, and watch the above video of him pissing on someone called Steve-O? Why did I read the entire saga of the feud between Alan McGee and Drowned in Sound?

It seems that I need vulgarity. I'm fascinated by it. The things I disapprove of define me as much as the things I approve of. Sure, I could spend all my internet time reading my digital copy of The Wire, watching the films on ("all avant garde, all the time") ubu.com, or listening to Arte Radio. But, even given the opportunity to be my own curator, my own programmer, I throw in some stuff that's compellingly appalling, some stuff I love to hate. Otherwise, what would there be to rebel against? How could I enjoy my trek to the cultural high ground? What would be the point in showering?
Collapse